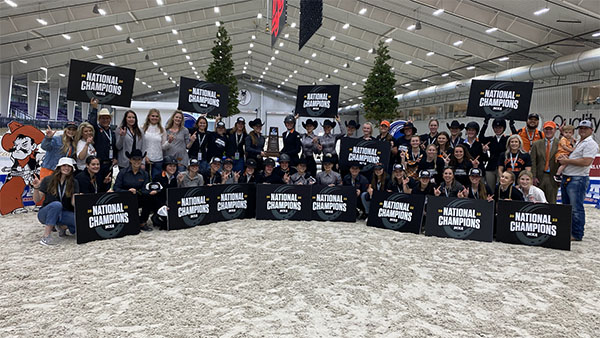 The day started off in Reining where Texas A&M won the event 3-2. Jojo Roberson defeated Taylor Masson 214-212.5 to take the first point of the day. Emmy Lu Marsh tied things up with a 213-204 win over Stephanie Helsen. Quincee Clark upended Keesa Luers 217.5-211.5 to lead 2-1. Lisa Bricker and Marissa Harrell won the final two points to lead by one going to Flat.

The Cowgirls tied the meet at the halfway point as they won Flat 3-2. Abigail Brayman, Katie Pelzel and Hope King garnered the first three points to gain a 5-3 lead until Kaitlyn Lovingfoss and Devon Thomas defeated their opponents to make it 5-5.

In Horsemanship, things remained tight. Maddie Fussell narrowly defeated MacKenzie Chapman 223.5-222 to regain the lead. Hayley Riddle tied up the meet once again with a 226-207 victory. Claire McDowall and Jojo Roberson claimed the next two points to lead 8-6. Cori Cansdale upended Natalie Vargo 225.5-221.5 to make it a one-point meet headed to the final event.

Closing out the day, OSU won Fences 3-2 to clinch the competition. Morgan Rosia routed Abigail Brayman 236-234. Emma Paycna and Riley Hogan were victorious in their rides as the Cowgirls led 10-8 with two rides to go. Devon Thomas topped Hope King 263-251 to come within one (10-9), but Sydnie Ziegler won her ride by a point and a half (250.5-249) to garner the win.