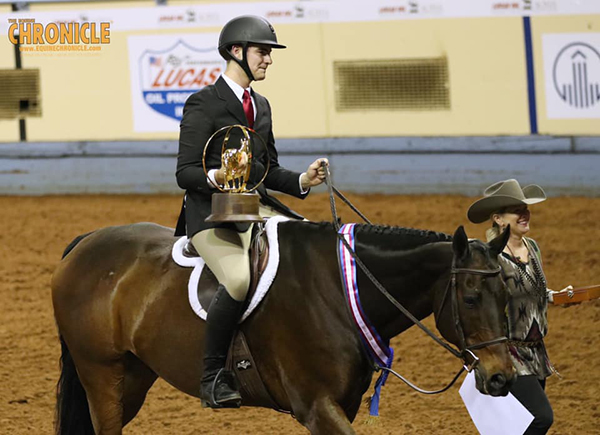 Two, new World Champions were crowned this evening in Amateur Over Fence classes at the 2019 AQHA World Show. First, Nicholas Furlong was delighted to win his first ever World Championship title in Amateur Working Hunter with Executive Hotrodder, aka “Norman,” a 20-year-old gelding that he has owned for quite some time.

Nicholas describes Norman as an arrogant horse, who has a big personality and knows when it’s show time. “He walks in the pen like he’s the best and struts his stuff.”

Making this win even more special, Nicholas says this is probably the last time Norman will come to the World Show. “I was really pumped to go in there. I started showing when I was 15 and have been coming here for seven years. I’ve been second and third, but never won before, so to finally get it done is pretty exciting.”

Prior to the class, Nicholas and his father/trainer, Tyson, came up with a game plan for tonight’s class. “My dad and I came up with a plan and that was to try to keep everything the same pace throughout the course and to remain fluid. We tried to hit every distance right on the money.”

“I could barely believe it. I thought Laura beat me, to be honest. We were talking back and forth, and I’m sure once the judges’ cards come out it will be pretty close.”

Reserve was Laura Rankin with Exclusively Urs Qrhc. Third was Indy Roper with Hottest One. Fourth was Hannah Bedwell with Desert Party. Fifth was Alexis Parisek with Truly Authentic. 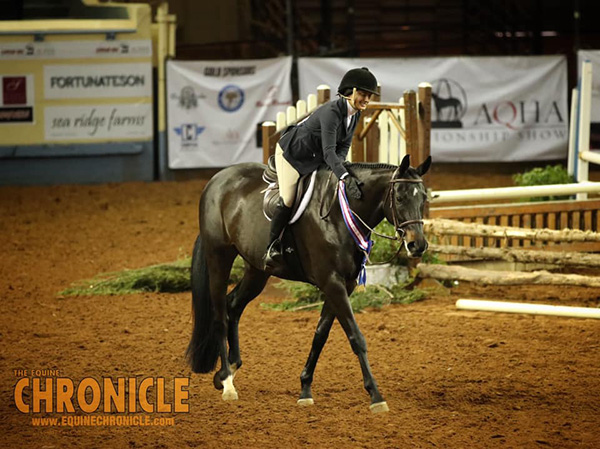 Next, Hannah Bedwell rode Desert Party to win Amateur Equitation Over Fences. Hannah has been a team with her 7-year-old gelding “Percy” since he was three years old, and she believes they are kindred spirits.

“He’s very easy. He’s the handiest horse I’ve ever ridden in my life. When we do the Derbies, he loves it so much. He’s with me every single step, and it’s amazing how we’re both one. I can read his thoughts, and he can read mine. I don’t have to tell him that we need to move up. He does it with me just thinking it.”

Percy stays at home with Hannah, but she does receive training instruction from Sandy Vaughn and Julie Moore. She’s been riding horses since she was just five years old on USEF Hunter ponies and received her first Quarter Horse in 2008. From then on, she’s wholly embraced the AQHA Hunter scene.

“This is really special, because it’s my fourth different horse that I’ve won a World Championship with.”

Although Hannah was a bit nervous that she and Percy had to ride the pattern first, she had already come up with a game plan. “When we were doing the Working Hunter awards, I was already focused on Equitation. I thought about cantering straight to the first jump and keeping my rhythm. I wanted to make it as handy as I could and keep my position in mind.”

Reserve was Morgan Ratkowski with Better Buy The Minit. Third was Laura Rankin with Exclusively Urs Qrhc. Fourth was Nicholas Furlong with Executive Hotrodder. Fifth was Jesilyn McCarroll with Get Me To Hollywood.