South Dakota State’s equestrian team was chosen as this year’s NCEA sportsmanship award winner. An example of the Jackrabbits sportsmanship this year was towards the University of South Carolina during the teams’ Nov. 23, 2013 competition in Brookings, S.D. Several Gamecock student-athletes and staff members still had missing luggage the morning of the meet, but South Dakota State’s student-athletes and coaches agreed to move back the competition and offered to provide the Gamecocks with competition attire for the meet until their luggage arrived. 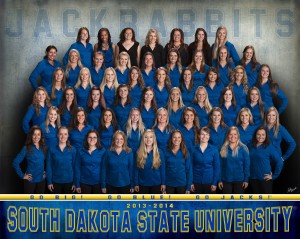 The SDSU Equestrian team has 46 members on their roster. In addition, they were the winners of the Independent tournament that was hosted at their facility this spring which included Fresno State University, Delaware State University, and University of Tennessee-Martin. When not competing, the team posted 826 community service hours at a variety of different charities and posted a 3.15 GPA. The team is coached by Head Coach Megan Rossiter and Assistant Coach, Kamerra Brown.

“I wanted to bring this award to the NCAA because great sportsmanship from a team aspect should not only be the norm, but should be held at the forefront of the team’s mission,” said Anthony.