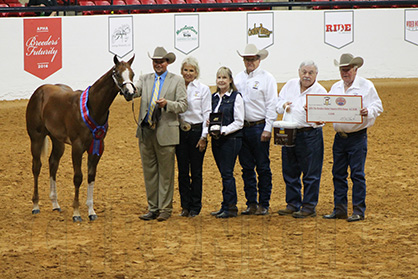 It’s been a busy day here at the APHA World Show, and we’re just getting started. First up, Cameron Brees won the WCHA Amateur OBE Weanling Stallions with Big Time Addiction. He followed that up with another win in Amateur Solid Paint-Bred Weanling Stallions and Geldings. He was also awarded with the Breeder’s Futurity Bonus purse of more than $1,000!

In Amateur Weanling Geldings, Adam Matthews led T For Texas to the win. The Reserve Champion was Edwin Baxley with LLR He’s So Cool. Third was Susan Groeb with Perfect Intentions. Fourth was Patricia Borland with Mr. Trump. Fifth was Curtis Peterson with Syndicated. 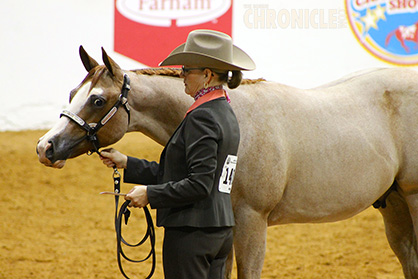 Given that Election Day is fast approaching, we simply had to talk to Patricia about the beautiful, red roan gelding known as Mr. Trump. This was Patricia’s first time showing “Trump,” who belongs to her daughter and son-in-law, Erin and Matt Henderson of TH Show Horses.

“Other than having a little ants in his pants in the class, he’s very mild mannered,” Patricia says. “You can drop the lead rope, and he will stand right there. His personality is really good.”

Trump is a new addition to the TH Show Horses Team; he was picked up in Utah just three weeks ago.

In Amateur Weanling Stallions, Ramsey Berry led I’m The Dominator to the win. The Reserve Champion was Kevin Hardcastle with IEM Amazing. Third was Curtis Peterson with Stylistic. Fourth was Mary Yount with I Can Be Cool. Fifth was Diane Stafford with MDS Chromed Fella. 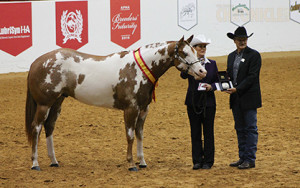 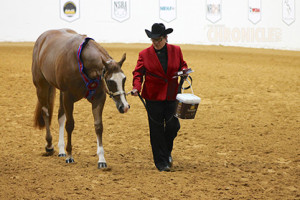 While Execute Imprint is an APHA registered colt, Grandioso, aka “Remus,” is double registered and will be competing at the AQHA World Show next week with Mitch Leonarski. “I think he looks like where they’re going with the Quarter Horse look,” Susan says. “It’s more about the profile, the jumped up withers, and not having so much bone in their legs. I’ve been showing Paints since the 1980s, and they’ve changed over the years. He’s certainly made that jump.” 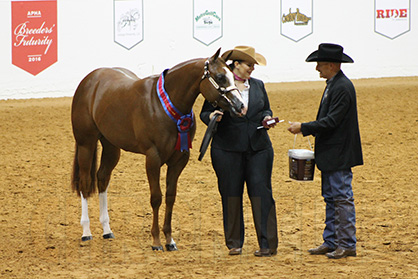 Marianne Berg led her beloved colt, The Crowning Touch, to win Amateur Yearling Stallions and their first World Championship title as a pair. “Richard” is by The Top Secret and out of Innocent Touch. She’s owned him since he was just five weeks old. “I love these horses so much,” Marianne says. “This is everything to me, and there was some really tough competition in that class.”

Last year, Marianne and Richard were named the Reserve Champions in Amateur Weanling Colts in what she considered to be a surprising finish. “He was probably the smallest horse in the class last year, so it was intimidating. We walked down for the class and all the other horses were so huge. I didn’t know if we could get it done. This year, he’s grown up, and he’s a wonderful horse. We love him.”

“He’s so balanced from the tip of his nose to the tip of his tail. He’s stunning, and anyone who knows me knows I have to have a pretty horse. Richard is the epitome of pretty. He’s prettier than most fillies, and he’s so smart. He knows his job, and he’s happy to do it.” 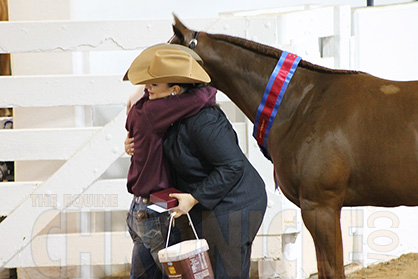 Marianne gets a hug from trainer, Matt Henderson.

The Reserve Champion in the class was Leanne Bandy with Execute Imprint. Third was Laurie Roden with The Voice. Fourth was Lonny Fisher with Executing Justice. Fifth was Kelli Stuard with Assuredly Fancy.

Andrei Sansores came all the way from Guadalajara, Mexico to win his first World Championship with CL I’m So Awesome in Amateur 2-Year-Old Geldings. He arrived at the horse show two days ago, but his horse made the trip to the United States three months ago to begin preparations with Team Finkenbinder.

“It’s a lot of work with the horse, because they have to train him to take the temperature from here, because it’s hotter in Mexico and colder here.” 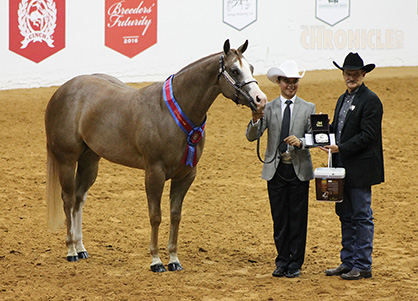 Andrei specializes in Halter horses. At his ranch in Mexico, which he co-owns with the President of the American Paint Horse Association in Mexico, Mora Rojas, he keeps 35 horses, including Paints, Quarter Horses, and Appaloosas. Andrei has participated at the APHA World Show for seven years and won numerous Reserve titles, but this is his first win.

Following the show, CL I’m So Awesome will begin the long trek home to Mexico. “He will travel on November 9th. In total, it’s 30 hours; it’s a very long trip. They stop every six to seven hours for the horses to take a break and take water.”

The Reserve Champion in Amateur 2-Year-Old Geldings was Marty Ware with CNC To Be Phenomenal. Third was Annette Schobel with Intentionallydesigned. Fourth was Gary Hayslip with Coolest Ambition. Fifth was Polly Plant with Casual Encounter.

In Amateur Walk Trot Hunter Under Saddle, Laurie Strong rode All That Charisma to win the class. The Reserve Champion was Haley Cunningham with Supermodel Gisele. Third was Carol Delgado with Real Me In. Fourth was Sabrina Seehafer with All That I Got. Fifth was Tracy Rodeback with CNC Hez High Profile. 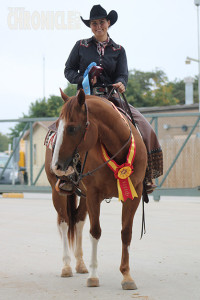 In the Ranch Trail Sweepstakes, Leslie Temple rode Gunna Win A Prize to be named the World Champion. The Reserve Champion was Sarah Keil with Big As Chex. Third was Craig Johnson with Smart As Bug. Fourth was Earnest Wilson with Ima Little Flicker. Fifth was James Jones with Deltas Foxy Big Heart.

We caught up with Reserve World Champion Sarah Keil and Big As Chex before they headed back home to San Antonio, TX. Sarah has had “Wyatt” in training for almost one year now, but this is his first time competing in Ranch Trail at the World Show.

“His lope into the hay obstacle was his best part, I think, because he went right up there and did a pretty stop. The thing that was challenging for most horses was there was a pair of chinks thrown over the hay at the end. It was right in their faces when they loped in. He just loped in there, and it didn’t even bother him. A lot of horses stopped and refused to go in. My other horse kind of jiggled a bit, but he loped into a beautiful stop.”

Sarah was also pleased with Wyatt’s trailer load and his ability to keep pace over the lope pole section. One of the reasons why Sarah enjoys all the Ranch classes is because of their practicality in everyday use. “I think Ranch Trail involves a lot of practical things that horses understand. They’re not asked to go really slow, and they enjoy it too.”