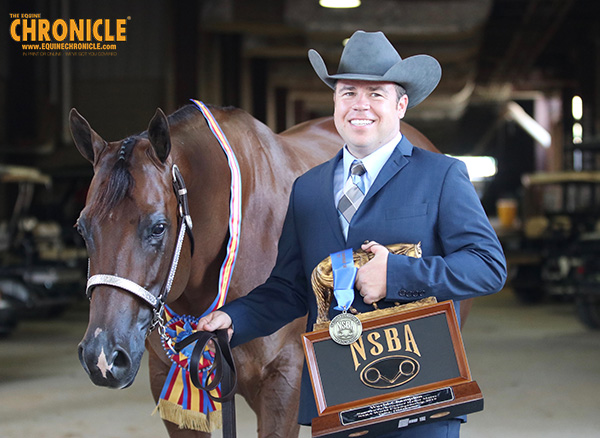 We’ve had the opportunity to speak with World Champions in Halter, Hunter Under Saddle, Showmanship, and Western Pleasure during this morning’s classes at the NSBA World Show.

“For Showmanship, she’s the best-footed horse I’ve ever dealt with. She stops square and does it automatically. Then, my trainer, Robin Frid, puts her together in Horsemanship, and she’s a little tank. She holds herself together, stays in the bridle, and does the pattern work.”

John and his wife share Reese, and they take turns competing in Horsemanship and Showmanship. Sadly, Reese is now for sale. “We like projects,” he says. “We took her in when she was three. We actually bought her here. We had her for a few years, and now it’s time for a new project.”

The Reserve Champion was Joe Whitt with Rumors Only. Third was Kara Sisco with Party Favours. Fourth was Vito Latini with Bettin I’m Best. Fifth was Kaye Nell Ochetto with Shes So Sleepy. 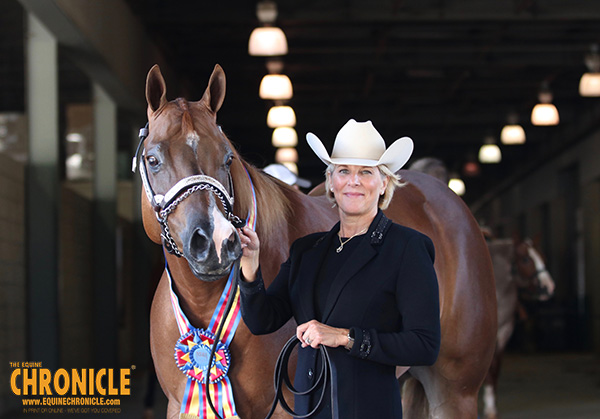 Dinnero won two World Championships today in Halter classes. His first came in WCHA Non Pro Performance Halter Geldings with owner, Sarah Reeder, at the lead. The second was with Ted Turner in the open division of the class.

Today is an emotional win for Sarah following the passing of her mother. “I quit showing for a few years after my mom died from ovarian cancer. She was my biggest fan. My mom’s birthday was yesterday.”

Sarah just purchased 5-year-old Dinnero in June of this year, but she’s known him since he was a baby, because he was raised by her trainer, Kathi Lawrence. “His mother and my old show horse were actually siblings. I’ve been showing with Kathi, off and on, for the past 20 years. I hadn’t ridden in 14 years; but now, for Performance Halter, they have to be qualified in a riding class. I’ve already gotten him qualified for the World Show in Stakes. I think this is our tenth grand championship this year.”

The Reserve Champion was John Boxell with Lu Johnny. Third was Dan Trein with I Can’t Sleep. Fourth was Jim McKillips with He’s No Secret. Fifth was Brent Maxwell with Hil Have A Taco. 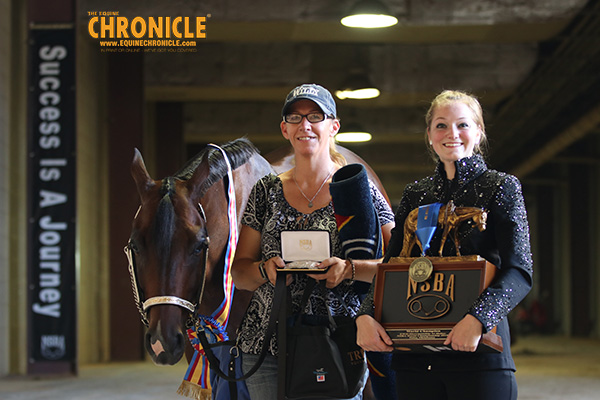 21-year-old Sara Carowick led Got My Dress Sox On, aka “Ricky Bobby,” to win EWD Showmanship. They’ve only been a team for three months, and this is their first NSBA World Show. Yesterday, they were the Reserve Champions in EWD Trail.

“My favorite class is actually English,” she says. “Showmanship is the class that I struggle with the most. Also, here at the show, we will compete in Hunter Under Saddle, Equitation, and Horsemanship.”

Sara is very excited about the inclusion of Equestrian With Disabilities classes at major events like the NSBA World and Quarter Horse Congress. This year will mark Sara’s third trip to the Congress. “Riding horses is very good therapy. I have epilepsy, and it calms the nerves. Casper, my service dog, alerts me when I’m having a seizure. He’s also great with horses.” 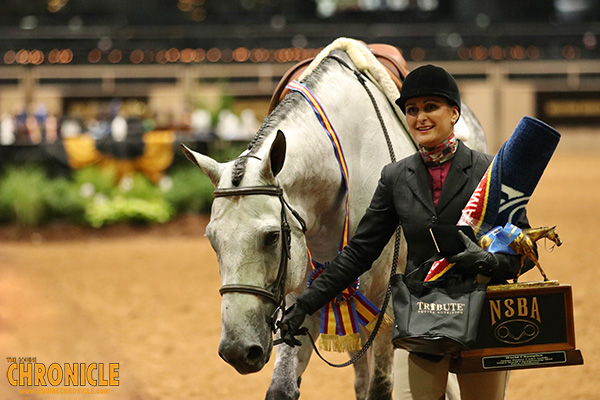 Winning Junior Hunter Under Saddle was Dawn Baker with Mito Been Me. Reserve was Beth Case with Couture Blue Genes. Third was Jamie English with Black Tie and Heels. Fourth was Sara Simons with Talk Southern To Me. Fifth was Keith Miller with EPR Face It I’m Fancy.

5-year-old “Daisy” has had quite the winning streak here at the NSBA World in the past. Last year, she won the BCF Non Pro 4-6 Limited Hunter Under Saddle and was Reserve in the Limited Maturity. In addition, she was the AQHA World Champion and Open Maturity Champion at the Congress. 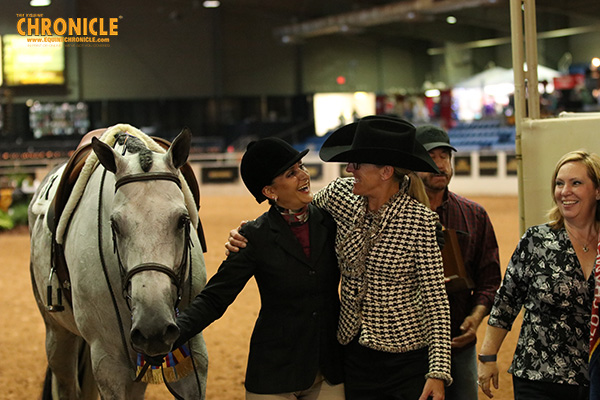 “She’s not a typical mare,” Dawn says. “She’s easy and loves to show. She’s spoiled, but she deserves it. She did everything I asked, and I didn’t have to ask much. She’s so big, but she has an even cadence. She’s really good-hocked for as big as she is, and her head and neck are always the same.”

In Color Breed Showmanship, Rebecca Figueroa led Check Required to a win. Last year, she won Equitation at the NSBA World. Just a few weeks ago, she was the L2 Equitation Champion at the AQHA Youth World with her horse “Bob.” 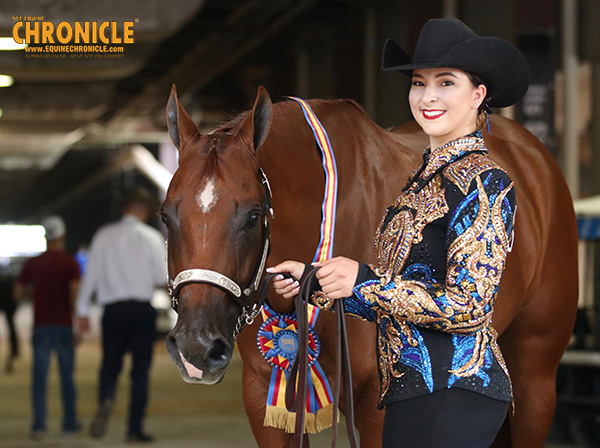 Showmanship and Trail are Rebecca’s favorite classes, and she gets to compete in both at the show today. “I thought that our back was good. We had to back a corner, and he moved off my cues very nicely. He stopped hard in the ground at the judged and had a nice set up. Overall, he was really good for me.”

Coming up next, they will show in Trail, Equitation, and Hunter Under Saddle. 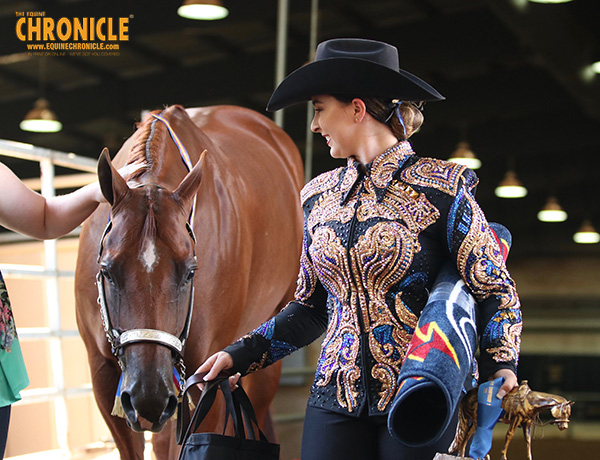 Reserve was Alyvia Dixon with Ultimately Rodney. Third was Samantha Stubblefield with Even More Sensational. Fourth was Renee Conklin with This Sheik Rocks. Fifth was Lauren Gralla with One Flashy Sensation.

The winner of 50 and Over Western Pleasure was Marilyn Masterson with KM Weknowsheshot. This win turned out to be the perfect anniversary present for Marilyn and Ken, who are celebrating their 19th wedding anniversary today.

“19 years ago, I didn’t think I would be at a horse show!” Marilyn laughs. “We had just gotten married at our farm in Tennessee. Zippos Sheik was the best man. Then, we got on a plane and went to California for a honeymoon.” 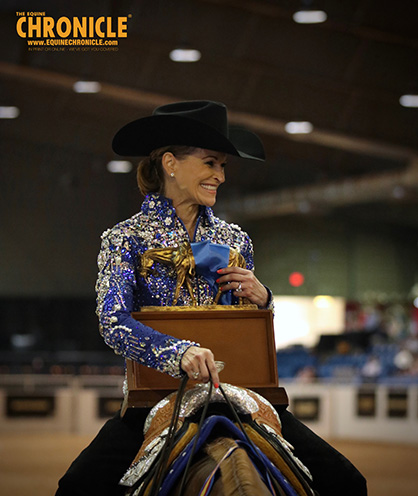 “Mercedes” is seven years old now, and she’s well into the senior division, but she’s certainly not slowing down as a multiple World and Congress Champion. She’s also passing on her talents to the next generation with a Machine Made stud colt and filly that the Mastersons are very excited about this year. “We’re not selling those!” Marilyn says.

“She stamps them all,” Ken says. “They all look like her, and we hope they move like her too.” 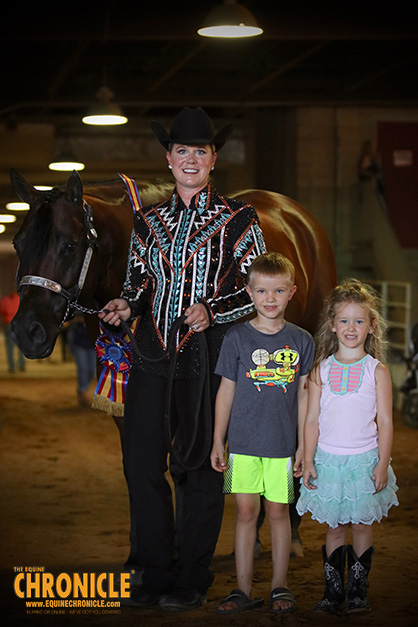 Katie Mitchell led Sure Enough Lazy to win her first NSBA World title in Novice Amateur Showmanship. Her partner for today’s class was her 8-year-old gelding, “Benz,” that she’s owned for two years and competes with under the guidance of Jess Bergantzel.

“He stayed with me, and I felt like we were in sync and together. He had a nice back and pivots, but my favorite part, that I wasn’t really expecting, was a very quick set up. Sometimes, we struggle with moving our feet promptly, but he just nailed our set up today.”

Coming up next, they will compete in Level 1 Horsemanship and Trail. Joining Mom in today’s win photo were her two kids, and the reasons she’s taken a 10-year vacation from horse showing, 4-year-old Ivy and 6-year-old Jasper. 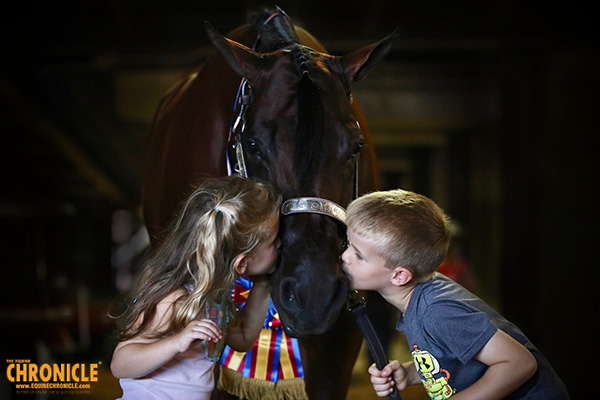