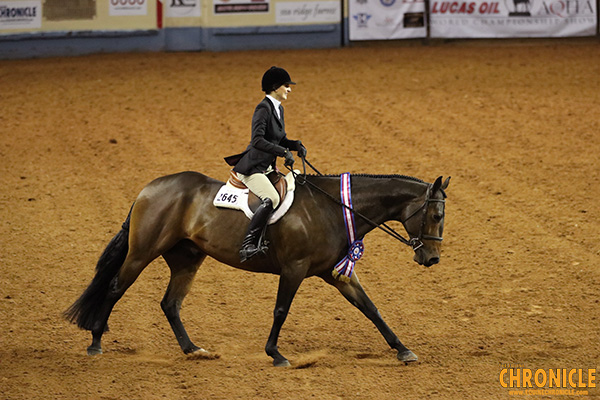 It’s always exciting when a newly crowned Congress Champion can come fresh off a win and duplicate their performance at the AQHA World Show to be named a World Champion as well. That’s exactly what Maria Salazar did this afternoon at the 2019 AQHA World Show when she rode her 6-year-old gelding, “Moonlightin,” to win Amateur Equitation. However, this achievement is even more special for Maria, because it’s her first World Championship title.

“Harley” and Maria have been a team for the past two years after purchasing him from Geno Spagnola, upon the recommendation of Charlie Cole and Jason Martin. They compete under the guidance of longtime trainer, Shannon McCulloch Bacon. Maria has won Novice Youth Western Riding at the APHA World Show in the past, but this is her first win outside of the novice division, at a World Show. Maria first started showing Paint Horses as a young walk-trot competitor and switched over to AQHA competition when she became an amateur. But no matter what breed she competes in, her favorite class has always been Equitation. 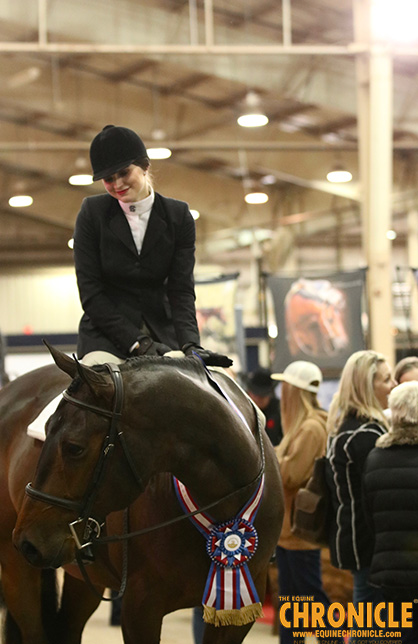 “I think, in the beginning, being in Shannon’s barn, you’re forced to like it. But now it’s definitely my favorite class. She teaches you to love it as well. Shannon is so talented at it, and she’s able to teach you well, which makes it fun. When it’s done well, it’s such a beautiful class. It’s big, beautiful, bold, and graceful.”

Maria tried to keep that mantra of “big and bold” in mind as she rode her way through the finals pattern with Harley. “Our plan was to break it down, element by element. There were pieces that we were hoping to plus and places where we just wanted to stay out of the penalty box. We had a plan for each maneuver and, for the most part, he was great. There were a few places where I could’ve asked him to do something better; but, overall, I was really happy. We were bold, which sometimes I play it safe. But not today. He was there for me, and he was wonderful. Harley tries super hard and is honest, which is not always easy to find. He’s so naturally talented.”

True to form here at the World Show, the finals pattern contained no cones or markers to speak of, but Maria likes it that way. “I like World Show patterns, especially because they’re so big and swoopy. You could put a jump in one of them and it would make sense. You can show off the pattern to the best of your horse’s ability.”

“I was really happy with our extended canter across the diagonal and up to the hand gallop and lead change. That’s hard and lead changes are something we haven’t been doing that long. Congress was our first time doing a lead change in a pattern, and they still terrify me a little bit.” 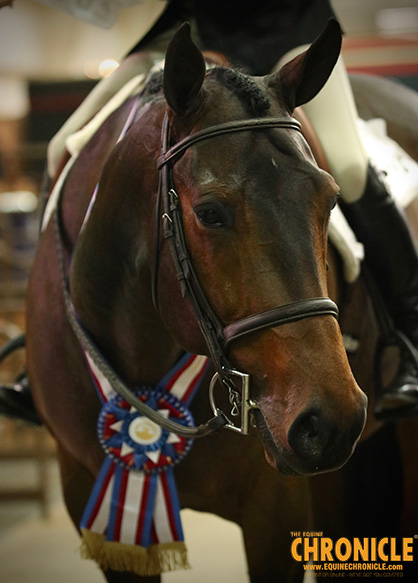 Coming up next, Maria and Harley will compete in Level 2 Equitation and L2 and L3 Showmanship, but she’s actually quite content to stop right now. “Honestly, I would be happy to go home right now and not show ever again!” Maria laughs.

The Reserve Champion was Morgan Ratkowski with Better Buy The Minit. Third was Carly Estreich-Luek with Kamanyawannadance. Fourth was Carrie Nowacek with Lethals Hot Weapon. Fifth was Jessie Godin with Forrest Green.

Jennifer Goss rode Hez A Dancin Hubba to win Junior Level 2 Hunter Under Saddle for owner, Chris Lagerblade, and trainer, Beth Case. “Hank the Tank” is a three-year-old that Jennifer also rode at the Congress to win the Limited 3-Year-Old Open Hunter Under Saddle and a Reserve finish in the open division. 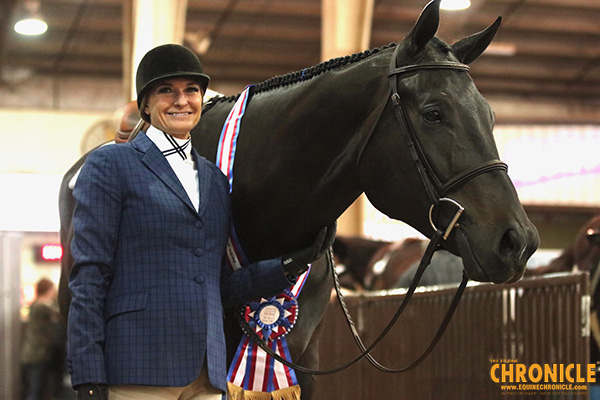 Jennifer also happens to be good friends with Hank’s owner and was her first choice to ride the gelding this year. “Chris Lagerblade owns him, and she used to be my customer 25 years ago. We’re still best friends and she told Beth that I was the person she wanted showing him in the limited classes this year.”

“He’s got the loftiest trot and is so fun to ride. He doesn’t really make mistakes. I told Beth that she could’ve put a monkey up there and he would’ve gone around.” 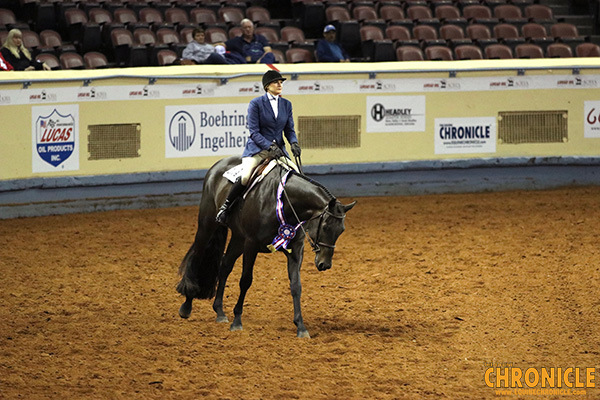 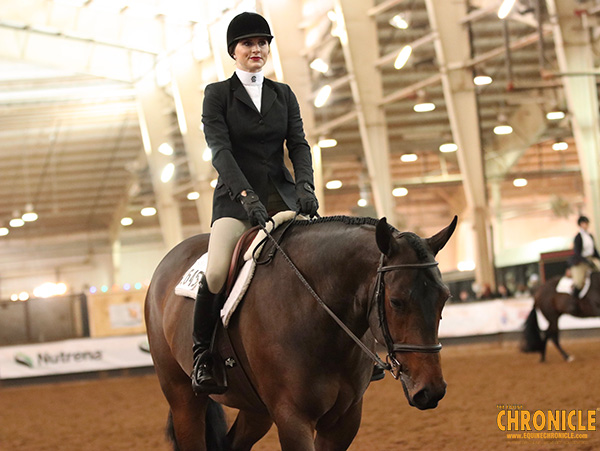 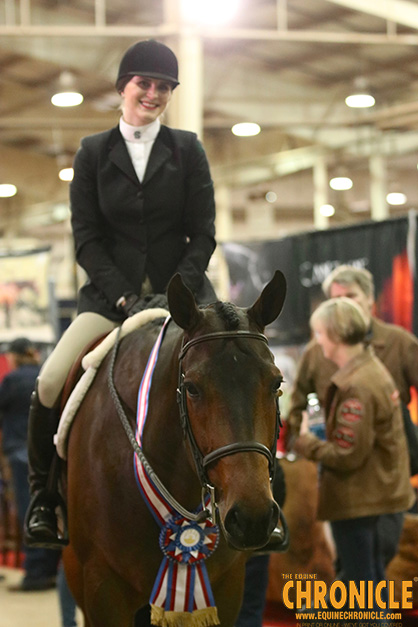 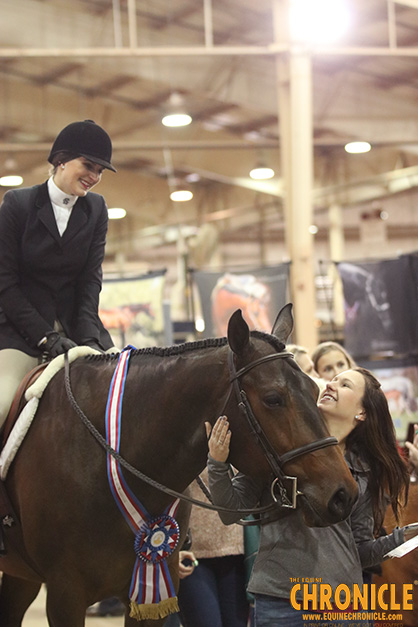 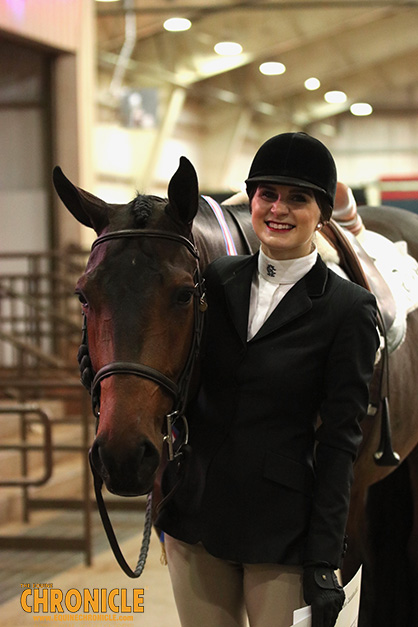 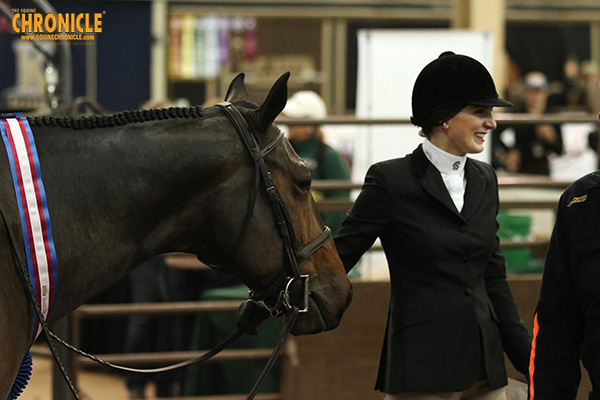 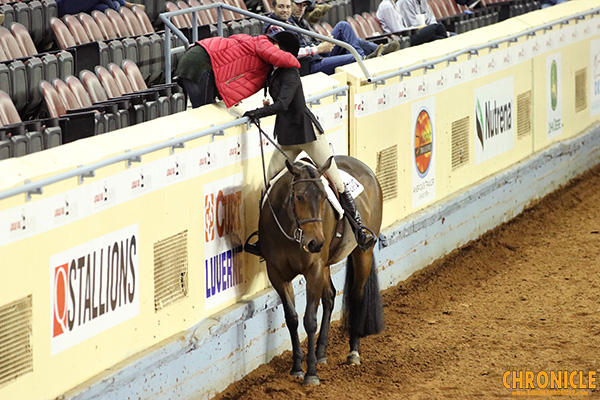