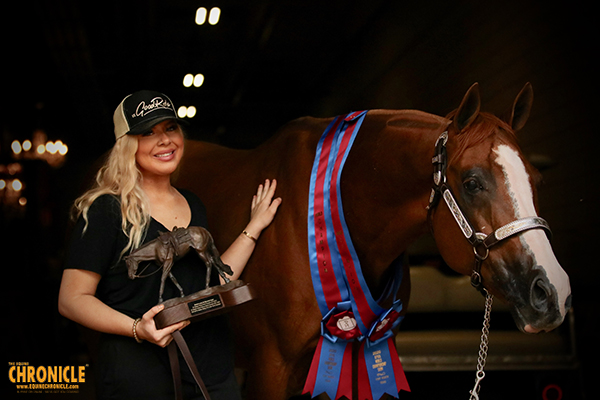 We saw a familiar face in the winner’s circle for 18 and Under Trail AND Western Riding at the 2020 APHA Youth World Show. Lauren Gralla and her trusty compadre, One Flashy Sensation, aka “Mel,” were named the World Champions in both classes, which took place within the same hour!

Because the Youth World Show was moved from its summer dates to be combined with the Open and Amateur World Show, the schedule had to be dramatically compressed. As a result, Lauren and Mel faced some quick costume changes for two of their favorite events.

First up was Trail, a class that 18-year-old Lauren and 15-year-old Mel have had great success in before, but have never won a World Championship title in. “I haven’t scored in the 80s with her before, and I won the class by seven points,” Lauren says. “Because the scores were so high, it made for a very special run. I’ve won in the past with A Sudden Legacy, but never with Mel.”

However, Lauren and Mel do have many World Championship titles in Western Riding. Mel has ten to be exact, and this last performance scored a big 232. They were also the World Champions in this class last year and Reserve in Equitation. But this was the first time they’ve ever had to do their two best classes literally back to back.

“It was actually a schedule conflict, so we had only about 30 minutes in between classes. But she was perfect. Those are her favorite classes, so she was all ready to go for Western Riding. She doesn’t need a lot of prep time.”

Lauren believes it is Mel’s Western Pleasure background that allows her to achieve bonus points in classes like Western Riding and Trail. “It definitely helps her, because she keeps her shape so nicely in Trail. For Trail, I made sure that she was shaped up throughout the lope-overs and that she moved out during the trot sections. I hadn’t really practiced the extended portions, but when I asked her for it, she was perfect, and usually it can be hard to find your spots. That was probably the best part of my pattern- the extended lopes and trots.”

Lauren has always loved these two classes, but Trail is definitely her favorite. She jokes that her trainer, Sara Simons, often calls her Mel’s “Trail Trainer,” because they get along so well in the class. “I don’t know why, but Trail seems to be my thing. I love Trail. I’ve had so many great horses like RL Sudden Style, A Sudden Legacy, and now Flashy Sensation. We do set up the whole pattern before the show, and I like to go out and practice every part by myself. I’ve gotten a lot better that way.”

For Western Riding, a class that 15-year-old Mel has dominated for most of her career, Lauren uses the same piece by piece approach that she utilizes when competing in Trail. “I didn’t used to count my strides, but Sara likes for me to do that. I count strides and think about every piece. I take it every step of the way, and I don’t think about the next lead change until the last one is complete. That’s exactly what I do in Trail. I don’t even remember the whole pattern afterwards. I’m just so in that object and that area and moment.”

“Both of these classes are based upon scoring, so you can always score better on your other obstacles and you can make up for any mistakes later on. That’s what I try to think about in case something goes wrong. I’ve had problems with her in the past where I thought I screwed it up, but I still did end up winning. That has taught me to keep riding. Every single time I come out of the pen, Sara explains all the penalties, so we know all about that, because she’s a judge.”

As far as Lauren’s future in the horse industry is concerned, she’s currently taking virtual classes at OSU and hopes to compete as an amateur. She has an AQHA yearling gelding named Cool Cool and a three-year-old AQHA gelding named Bad An Boujee. She also has her eye out for an AQHA Western Pleasure horse for next year.

“I’d really like to have some babies out of Mel, maybe by Machine Made or VS Good Ride. I think she’s such a unique horse, and she’s really pretty to look at. She’s always fresh on her legs and is ready to go and happy. I’d like for her babies to have her Western Riding capabilities too!”