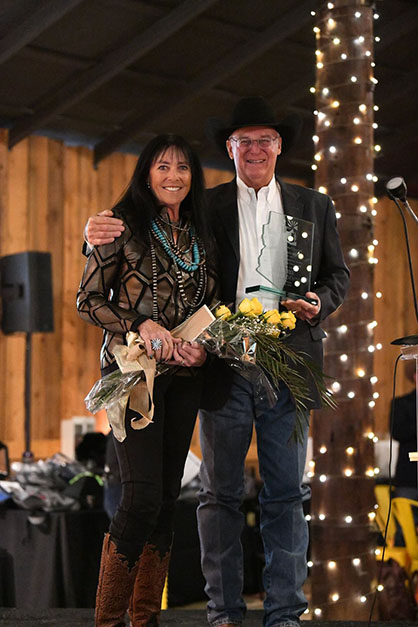 During the AzQHA Year-End Awards Celebration that took place January 16th at Desert Foothills Scottsdale, Laurel Walker Denton was inducted into the AzQHA Hall of Fame.

Below is her Hall of Fame Presentation:

Laurel was raised on the Bar U Bar Ranch in Skull Valley, Arizona. It was primarily a cattle ranch; Laurel grew up in the saddle gathering cattle on the 84 sections, learning horsemanship from her parents Sonny and Sissi Walker. Lolli, a nickname that would stay with her forever, started showing in 4-H with the ranch horses. Soon she was showing in the newly organized American Quarter Horse Youth Association. Lolli won her first of many saddles in 1969 for AzQHA All Around 13 & Under youth. Lolli showed in both western, English and speed events, however her passion was the Reining and Cowhorse events. She was also on the board of the inaugural Arizona Quarter Horse Youth Association, going on to serve at a national level on the American Quarter Horse Youth Association executive board.

The Walkers traveled to Oklahoma City in 1976 where Lolli won her first AQHA World Championship in Aged Geldings with Skip Scamp. Owned and shown by Laurel, Skip was an AQHA and AQHYA Champion.

In 1996 Laurel became an AQHA and NRCHA judge. She has judged most major shows in the industry including the AQHA Youth, Amateur, Select and Open World Shows.

Laurel served as the first woman president of AzQHA in 1983-1985 and was also the first two term president. She was elected AQHA Director in 1992 and served on numerous committees, including Chairman of the AQHA Youth Committee. She was elevated to AQHA Director at Large in 2016. In 2008 Laurel and her sister, Carol, accepted the AQHA 50 Year Breeder’s Award for the Bar U Bar Ranch. In 2009 she won the Merle Wood Humanitarian award given by the American Quarter Horse Association.

When AQHA instituted the Ranch Riding class, Laurel felt this class was made just for her and her horses. Laurel has been instrumental in keeping the integrity and authenticity of the Ranch division. After judging the first class offered at the AQHA World Show, Laurel has made the finals, won or been in the top three placings every year. In 2017, she won the Sr Ranch Riding with Light N Lucky.

Laurel’s passion for keeping the Arizona Quarter Horse magazine in print has been going on since 2000, helping to edit and print a magazine for AzQHA members. One of the most important things to her is keeping the past alive through the “Looking Back” pages, where old photos in each issue remember the horses and people that helped form the Arizona Quarter Horse industry.

In 1997, Laurel married Barry Denton and it is because of his support that she credits most of her successes. Laurel and Barry still live and operate the Bar U Bar Ranch in Skull Valley, AZ. Lolli joins her mother and father, Sonny and Sissi Walker in the Hall of Fame.