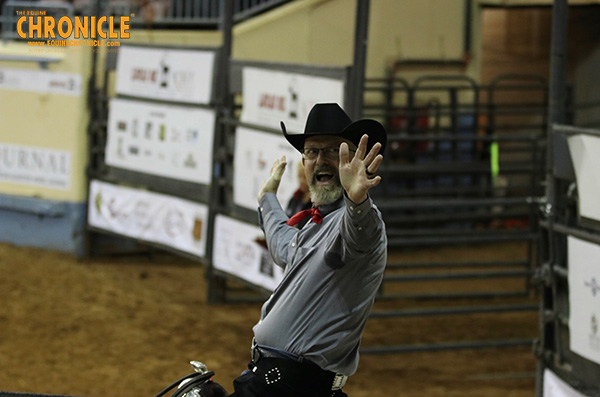 Kelly McDowall has been competing at the AQHA World Show for the past thirty-something years and today he finally won his first World Championship title! Kelly’s partner for the win was Moonlite Madnez, a 5-year-old gelding owned by longtime client, Natalia DeVencenty.

In trademark Tim Kimura-style, this course was tight and challenging with high poles wherever he could fit them in. Kelly and Natalia chatted the night before about the fact that it was highly unlikely a single horse would make it through clean. “I told Natalia last night that I thought the winner would have at least five ticks,” Kelly says. “I didn’t think anyone would go through clean. And nobody did. It’s too much to ask any horse to miss all these poles. Also, there was a lot of distraction.” 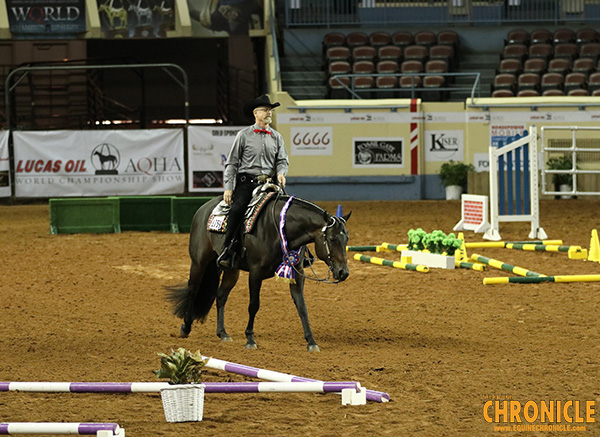 Making things even more difficult, Kelly and “Moonie” were sixteenth to go in the working order, and the course was in need of some adjustments by the time they came through. As a result, they stood in the start box of the first obstacle for nearly four minutes before they were given the go-ahead to begin.

“They had to fix the back through, and the judges were nice enough to let me wander around a bit. It didn’t bother me one little bit. The only thing is that he’s very slow-legged and doesn’t start off right away. Tim’s thing this week was to have us rabbit-start every lope, and so he had two strides to get loping. I was afraid when I put my foot in him that he was still going to just be standing there.” 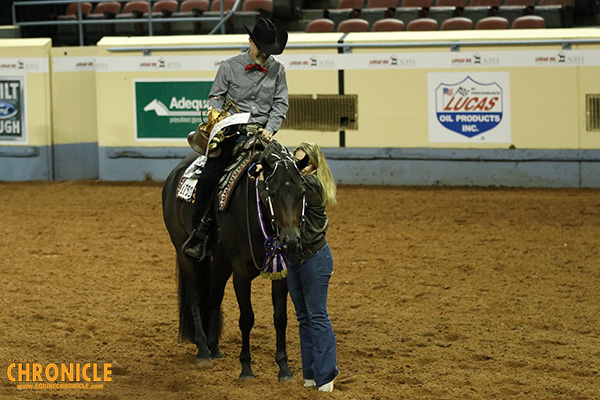 Moonie’s easygoing nature dictated Kelly’s preparation for this morning’s class, and there wasn’t much to speak of. “He’s usually very easy and, when he gets tired, he doesn’t perform as well, so we don’t do anything with him. I literally didn’t ride him this morning. We saddled him, put his tail in, and I walked over here and warmed up for about ten minutes. Then, we showed. That was it. He’s easy. He’s about like Natalia’s Chex Is The Choice. He’s very smart and knows the obstacles.”

But every horse can throw a curveball now and again, and Moonie decided he was feeling a bit fresh this morning. “He had a little bit of a spooky feel this morning. He saw something in there he wasn’t too sure about. But, when he got up and stopped before the side pass, he was fine.” 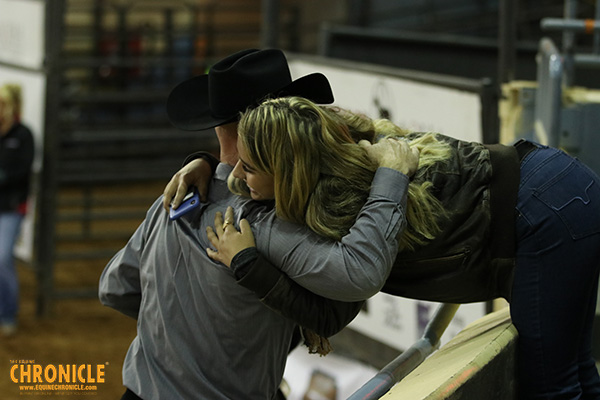 “He always has his ears up when he’s showing. When he gets too tired, you can tell, because he will chomp his bit and his ears won’t be up. The strategy was to show fresh.”

It seemed as if Kelly’s strategy definitely worked as Moonie showed excellent expression over the obstacles and only had a few rubs and one tick to speak of. “For no more than he felt like he was paying attention, he was very careful. He didn’t want to touch anything, but that’s kind of him every day. If you practice too much, he will get dead to the poles. I can get on him any day of the week and go over a bunch of high poles, and he will hop right over the top of them. He doesn’t like things touching him.”

“To be able to trust him is awesome. I don’t have to worry about him getting over the poles at all. I can just sit there and guide him. I’ve never had a horse like that where I can just trust him to do his job all the time.” 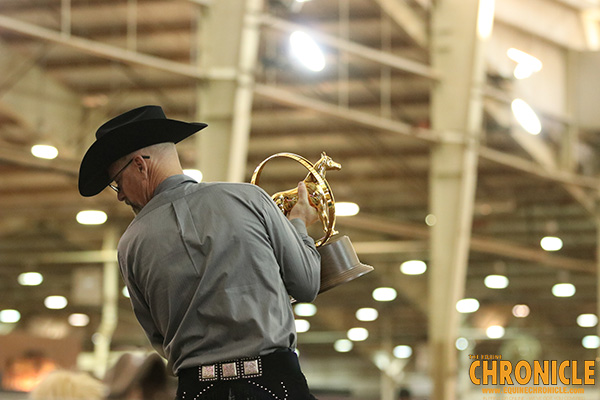 Of all the obstacles, Kelly feels that Moonie performed the best in the spins. “He’s a bionic spinner. Natalia shows him in Horsemanship, and he whips around. Then, he will shut it off and ease his way through the back through. He’s really pretty at that too, so I thought that was exceptional.”

Later on in the show, Moonie will compete in Junior Western Riding with Kelly and Amateur Horsemanship, Trail, and Western Riding with Natalia. But anything after this point is just icing on the cake, following this long-awaited win. Kelly wants to thank this support system at the shows and back at home, including his wife, Marnie, and kids, Klay and Claire, who couldn’t be here today. 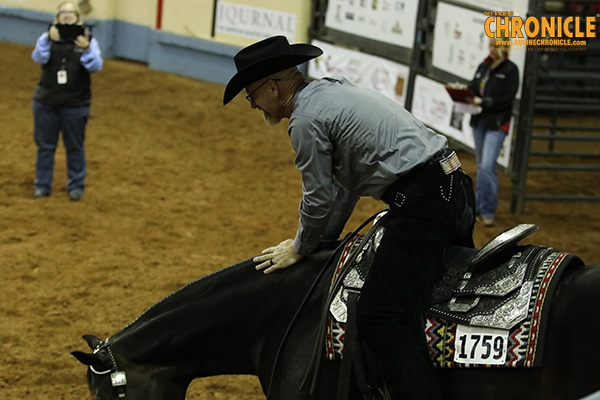 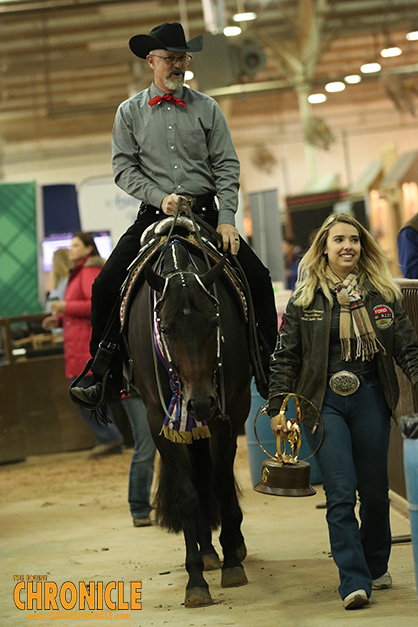 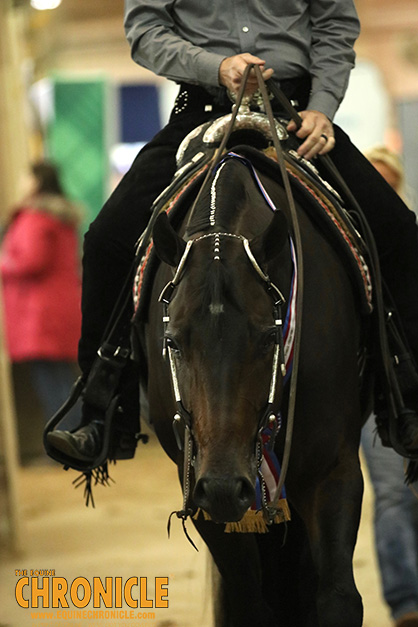 “I just turned 53, and I’ve been coming here a very long time, some thirty years. This feels like relief! I don’t have to retire without a gold trophy. It’s fantastic. I don’t get really excited on the outside, but I’m excited on the inside.”