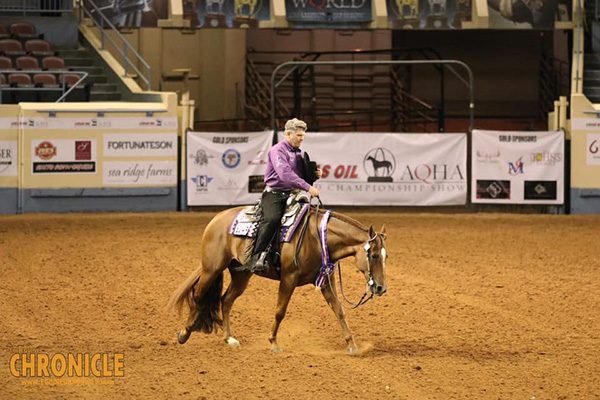 This evening’s finals at the AQHA World Show kicked off with Jason Martin claiming the top two spots in Senior Western Riding. He was named the World Champion with Zippin A Breeze and the Reserve Champion with Heza Radical Zip.

The six-year-old gelding they call “Dani” was purchased by the Knapp family at the Quarter Horse Congress last year, and Jason has been working on creating an amicable partnership ever since.

“We bought him from Alex Chavez last year at the Congress, and they kept him throughout the World Show,” Jason says. “He was the Level 1 Western Riding Champion last year. We started off competing in the first of the year in Level 2 Senior Western Riding classes. It took a while for him and I to get on the same page. Every month, he seems to be getting a little better. He peaked at the right time.”

“He’s a really nice horse, but his style, when I got him, was a little different than my own. It was a little bit of a learning curve. To have a six-year-old step up in the senior division is pretty good.”

In addition to winning with Dani, Jason also rode “Troy” to be named the Reserve Champion. This is the horse he won Senior Western Riding with the last two years. But he’s had struggles of his own this year.

“He broke his leg in March right above his knee. It was a hairline fracture all the way across his knee. He did it at the Las Vegas horse show. I think he was kicked by a horse. So, he was off for 90 days, and I only showed him in one class since last year’s World Show. It was kind of special that he was able to be shown here.”

This win makes it the fifteenth time that either Jason Martin or Charlie Cole has won Senior Western Riding at the World Show. What has helped contribute to their decade of dominance? Attention to details.

“It’s challenging. I like the scoring system and that you’re always trying to get every little plus half. The competition is so tough now that I feel, when I’m jogging, I’m trying to think about getting a plus half jog. When the poles come up, I thinking about rating the pole so I can hit it perfectly and get a plus half. It’s become so technical. When you lope off, I’m making sure his head is down and thinking about the transition, because I want to plus half that. All those little plus halfs, times three judges, that’s what’s deciding this class nowadays. It’s the fine hairs.”

Of course, what the spectators see is only the finished product of considerable preparation that’s done at home. “We always have a line set at home. Every time I ride one of my horses, that’s a Western Rider, I go through the line at some point. Obviously, it’s about body control, steering, and practicing the stop and back. It’s about breaking it completely apart and trying to perfect each piece.”

“To be able to go down the line on a full drape, a horse has to know where it is going. You can’t be steering. They know they’re going to weave the cones. It’s your job to make them wait for you. So, it’s kind of a learning curve. First, they get worse and cheat and then they learn to wait.”

Jason would like to thank his entire crew at Highpoint, including friends, Sara Simons, Dasi Jablonowski, and Ashley Dunbar-Clock for their support.