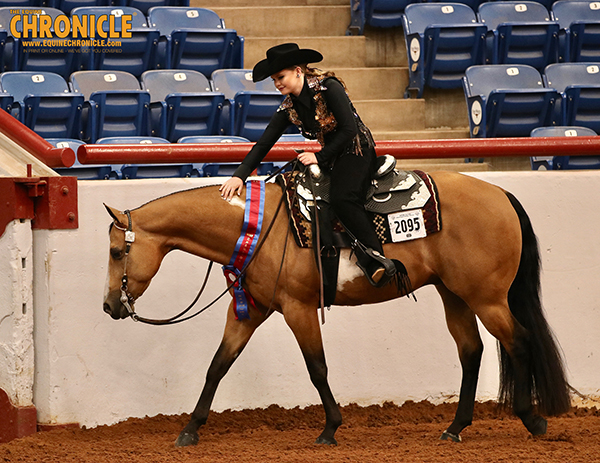 Today’s classes included a mixture of Trail and Western Riding. First, Siena Holyoak won her first APHA Youth World Championship at her first Youth World Show with Pleasure Power in Novice Youth 14-18 Western Riding. The Reserve Champion was Amanda Nelson with Mr Verifiable. Third was Taylor Daniel with Who Sez. Fourth was Lindsey Watland with A Subtle Impulse. Fifth was Amber Nusser with Time To Be Famous.

14-year-old Siena has been showing Paint Horses since she was eight years old, but this is her first time at the APHA Youth World Show. The Holyoak family has owned 9-year-old “Tonka” since he was just a yearling, but Taylor has only been showing him for the past two years. Siena feels his smooth moves, versatility, and eye-catching color are among his many positive attributes.

“He’s a different color than most of the horses, and he stands out. He’s a really good mover too. Tonka does a really good job of the lope-overs. If I can just get him to the spot where he needs to be, he’s good. The only thing that I usually have a hard time with is finding my spot with the lope overs, like getting too close or too far away.” 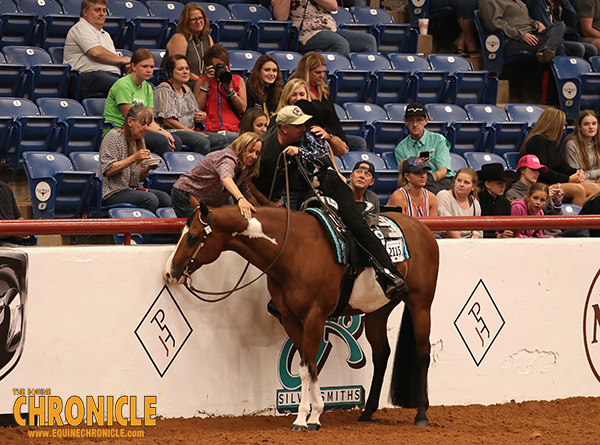 Earlier in the show, Siena and Tonka placed fourth in Showmanship and tenth in Equitation. Later in the week, they will compete in Horsemanship and Western Pleasure.

Although Siena is new to the Youth World Show scene, she has accumulated a whopping 27 titles at the Pinto World Show over the years. 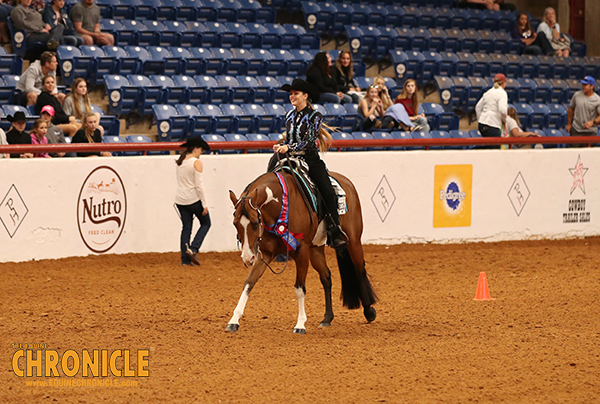 Taylor was very surprised to be in the final two at the end of the class today. “When it got down to the final two, I thought, ‘Oh my gosh, I have to know which way this is going to go!’ Renee had a beautiful go, so it was up in the air, but I was so happy to be in the top two.”

Taylor has been riding “Howard” since October of 2018, and she’s been competing under the guidance of Karen Qualls for the past two years. We wondered what advice the “Western Riding Queen” had for Taylor before she competed today.

Earlier in the show, Taylor was Reserve in Novice Youth Hunter Under Saddle, fifth in Novice Showmanship, and third in Novice Trail. Her favorite classes include Equitation, Western Riding, and Trail. “I love patterns, because it gives you something to think about. I love critical thinking and keeping my mind busy. I like the challenge.” 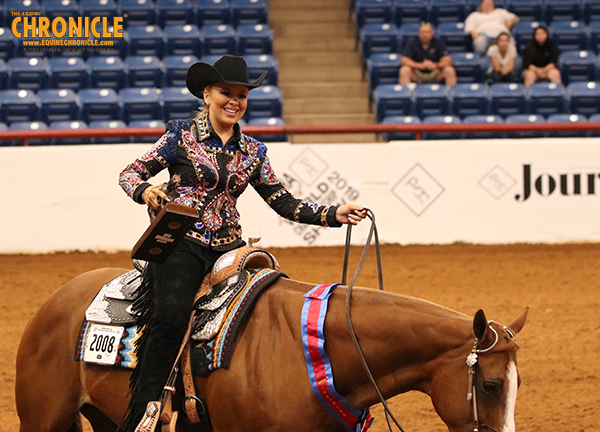 Lauren Gralla rode her new horse, One Flashy Sensation, to win 18 and Under Western Riding. The Reserve Champion was Samantha Stubblefield with Even More Sensational. Third was Talyn Smith with Its All Bhindthe Zipr. Fourth was Erin Griffin with Gotta Glo Slo. Fifth was Macie Soderquist with Ima Mega Sensation.

“Mel” is a new horse for Lauren. They’ve only been a team for the past four months. In fact, this was their fourth Western Riding pattern as a pair. Lauren has had previous success in this class with her old horse, A Sudden Legacy, who she’s won with three times. 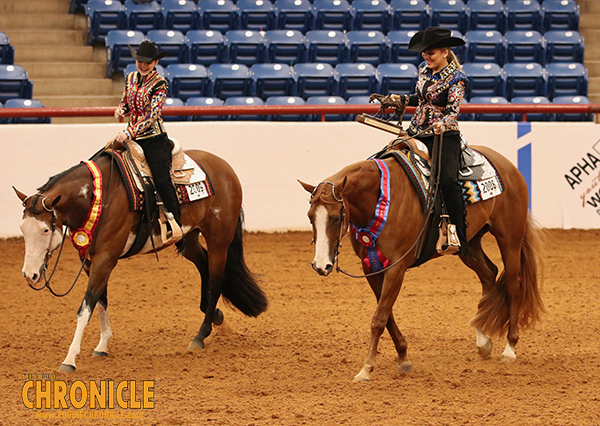 “I knew it was going to be good when I walked in and she sat down in the bridle before I went over the pole. Then, I got up to cadence. That’s the one thing Sara tells me is that once I get over the pole, I have to get up to cadence and stay there for the whole pattern. She’s a really fun Western Riding horse. I’ve never enjoyed it this much.”

Earlier in the show, Lauren and Mel were Reserve in Equitation. Tomorrow, they have the 18 and Under Trail finals and Horsemanship and then it’s on to Western Pleasure on Thursday.

“I’ve never had a mare before, and some people say they can be a little crazy, but Mel is so sweet. She does have an alter ego, ‘Asia,’ that she goes into when she’s feeling boujee and wants her fancy Studmuffin treats. But, she’s a really good mare.” 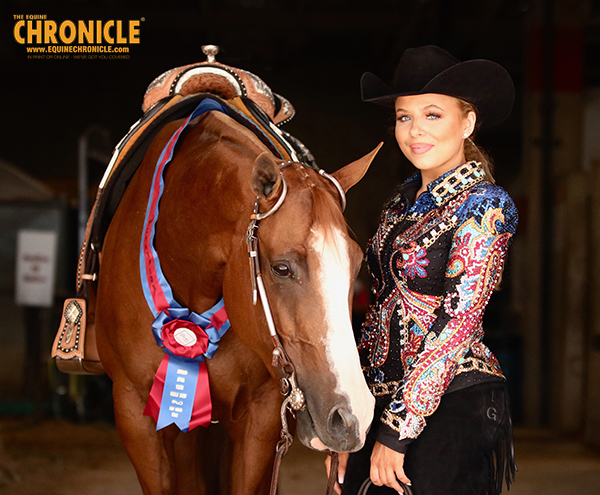 The winner of 13 and Under Western Riding was Cara Christensen with Slightly Fancy. Reserve was Lauren Lauver with Sensational Bandita. Third was Ady Kallay with Gotta Be Sensational. 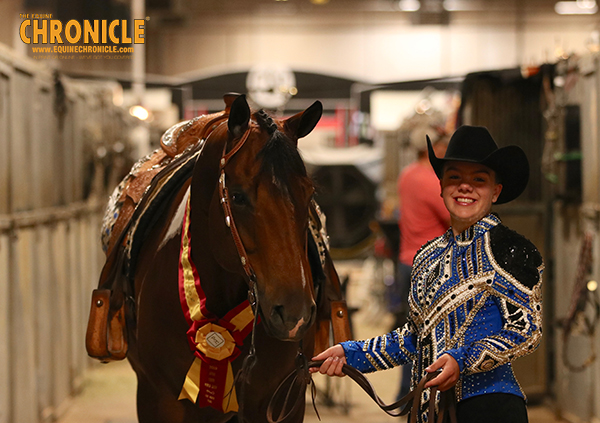 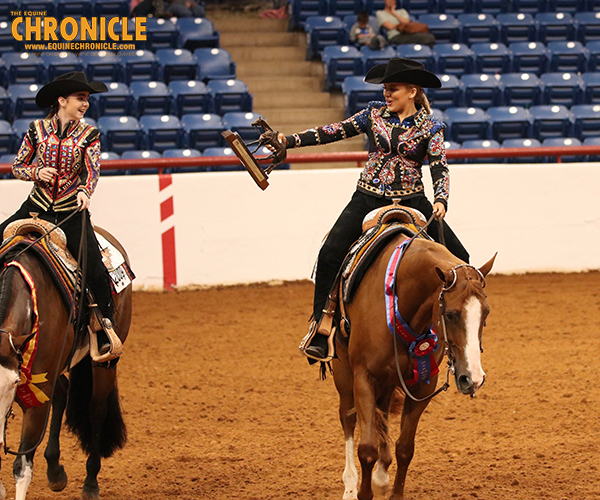 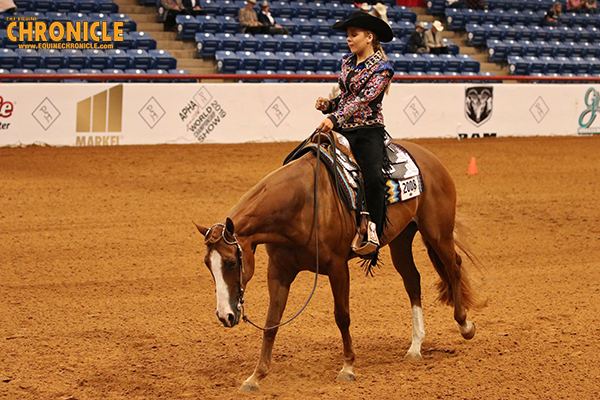 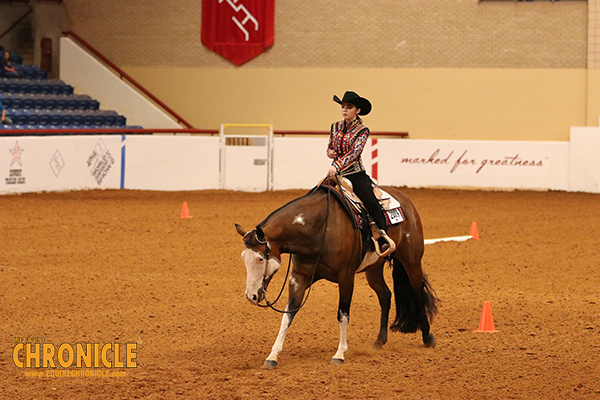