From Grand Prix to NCEA Championship, What it Takes to Become a Collegiate Equestrian MVP 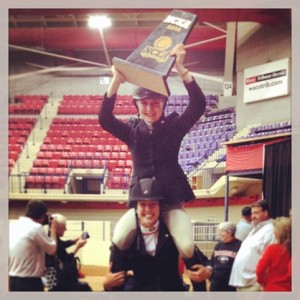 Liza Finsness was 10-years-old when she tacked up for her first ride at Castlewood Farm. Now, nearly a decade later, Finsness helped her University of Georgia Equestrian Team earn the National College Equestrian Association (NCEA) Championship and was named a Most Valuable Player – successes that she credits to her years of training with Alan Korotkin at Castlewood Farm.

“I learned everything from Castlewood and from Alan,” Finsness said. “The coaches here at school are great. They prepare you for the different show atmospheres and getting on the different horses all the time, but really all of my basics and my riding fundamentals came from Alan. What I learned from him is why I was recruited. He sort of made that happen.”

Not only did the riding skills that Finsness’ has acquired at Castlewood Farm lead to her recruitment to the University of Georgia Equestrian Team, they have made her a valuable asset to the team, which she proved on April 19 at the NCEA Championships in Waco, Texas.

“I love [the team aspect]. It makes every win that much more rewarding because whenever I do well, I’m not just doing well for myself, I’m doing well for the 70 girls on my team,” Finsness said. “The support is so great. It feels so good when we all do well, and the excitement is amplified over 70 people.”

Finsness continued, “I didn’t really know how it was going to work out when I came to school to ride for them. It’s so different. I didn’t know how I would end up doing, but everything has worked out. It’s the most rewarding thing ever, just being able to do well for your team.” 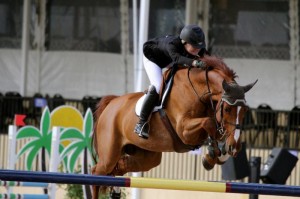 Winning the NCEA Championship is one of Finsness’ proudest riding accomplishments – tied with her victory in the $35,000 Adequan Grand Prix at the 2013 Atlanta Summer Classics.

With the college semester coming to an end, Finsness is looking forward to returning to the grand prix and high jumper rings with Castlewood Farms and her two mounts, Ormbsy Hill and Shiver.

She will be competing throughout the summer at the Kentucky Horse Park with both mounts while simultaneously gaining vet tech experience, shadowing and interning veterinarians in the Lexington, Kentucky area.

Castlewood Farm, Inc. is a full service riding, training and sales facility located on ten acres in the heart of Wellington, FL. Alan Korotkin and his team, including exceptional trainers Susan Tuccinardi, Steven Gregorio and Samantha Senft cater to the serious equestrian, offering instruction for the beginner, the medal finals veteran, the grand prix specialist and everything in between.

Castlewood Farm, Inc. presents a vast selection of horses for sale or lease, suitable for all divisions and in every price range. The farm also offers leasing packages, including a WEF lease specifically catered to the winter circuit competitor.