Four Horses to be Inducted Into APHA Hall of Fame 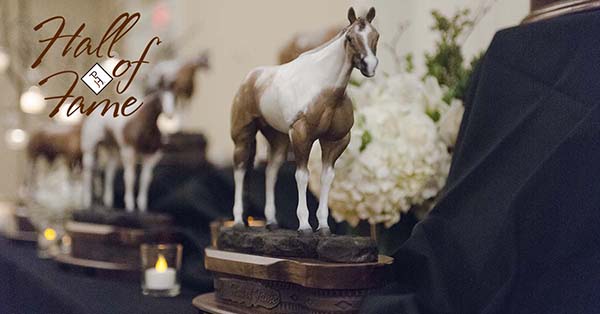 The best of the best, the cream of the crop—since its founding in 2012, the APHA Hall of Fame has honored the legendary people and Paint Horses that exemplify what it means to be a part of the APHA family. Whether it was through successes in the show ring or advocating for the Paint Horse across different platforms, to be inducted the APHA Hall of Fame is an honor that a select few can claim as their own.

In 2020, four Paint Horses will join the elite group that is the APHA Hall of Fame and will be recognized for their impact on the organization. Their names and legacies will be commemorated at the APHA Hall of Fame and Educational Outreach Center at the new APHA Headquarters in the Fort Worth Stockyards. The four horses that have been selected are:

Cactus Christy, a 1977 bay tobiano mare by Cactus Banner B and out of Debla’s Bimbo was owned by Haverty Ranch in Krum, Texas. A dam of seven foals that went on to earn 293 APHA points, Cactus Christy earned 114 lifetime APHA points herself in cutting, halter, reining, working cow horse and Western pleasure. She collected multiple awards before her passing in 2003, including two national champion titles, three Registers of Merit, one Superior Event and two world championship titles.

Color Me Smart, owned by Iconic Color LLC of Fort Worth, Texas, has sired 841 horses that have acquired 4,814 APHA points and 582 PAC performance credits collectively. A 1991 bay tobiano stallion by Smart Little Lena and Doxs Paint Lady, Color Me Smart earned a Register of Merit and a world championship title for cutting in 1997.

Olympia Joe, owned by Creighton Ranch & C N Keith of Paris, Texas, was a 1977 sorrel tobiano stallion by Joycrief Bar and out of Olympia Babe. Bred by King Merritt of Vicksburg, Mississippi, Olympia Joe was the sire to 453 horses that have earned 2,381 APHA points, 1,840 racing points and 728 PAC credits. Olympia Joe earned a Register of Merit for racing in 1980.

These incredible Paint Horses will be inducted into the APHA Hall of Fame on Feb. 29 during the 2020 APHA Convention at the Fort Worth Stockyards.

For more information about attending the Hall of Fame induction ceremony, contact Theresa Brown at tbrown@apha.com.