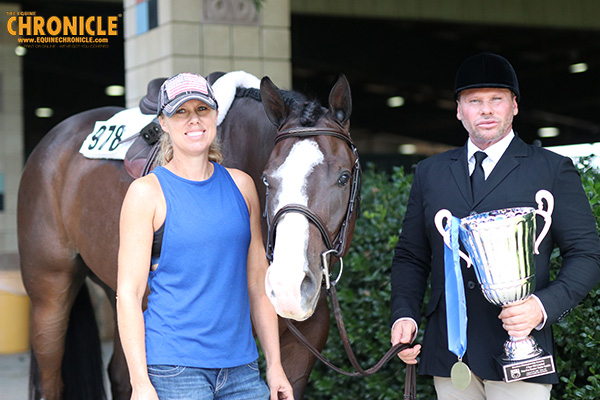 Although he’s a Paint Horse, “Jameson” is quickly becoming well-known in AQHA circles as well for his many stellar performances at the Quarter Horse Congress last year as a two-year-old with former owner, Stacey Carleton. Kent was touched that she came down to Tulsa to watch him show Jameson for the first time.

“The first time I’d ever even shown him was the first day here in the Select Hunter Under Saddle,” Kent says. “I’d only ridden him in the English saddle once at home. I came to the NSBA World last year with my Western horses, but this is my first year back with a Hunt Seat horse in 32 years.”

Kent purchased Jameson at the Quarter Horse Congress last year on the advice of one of his trainers, Jason Martin. “Jason called me and said, ‘Kent, I’ve found a Hunt Seat horse that you will love.’ So, I bought him without even riding him. He’s just a giant teddy bear. All he wants to do is play and be in your pocket. He’s such a sweet guy.” 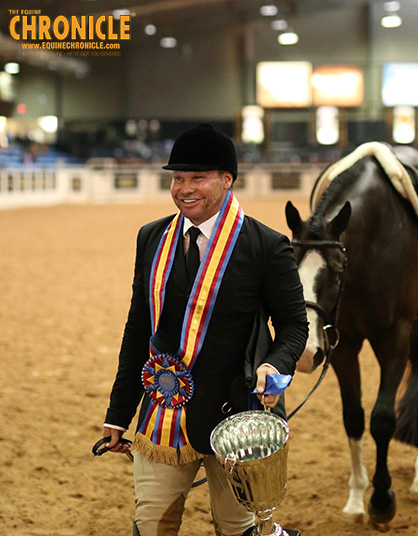 In addition to his striking coloring and kind demeanor, Kent was quickly taken by Jameson’s effortless movement under saddle. “His head and neck stay so level, his trot is amazing, and he can canter well too. He just looks effortless to me. He’s so big and strong, and he just keeps getting bigger. He’s only three, and he’s 18 hands.”

Kent still plans to campaign his other horses in Western all-around events, and while his first love will always be Western Pleasure, he’s enjoying a slight switch up in discipline. “My favorite is probably still Western Pleasure, and I really like Horsemanship. This is my first time to show in Hunter Under Saddle, so I feel like each ride I just get better and better. Honestly, Beth gets them so broke that there’s not a lot to it. You do your part and he will do his part.”

Coming up next, this pair will head to the APHA World Show and Quarter Horse Congress.