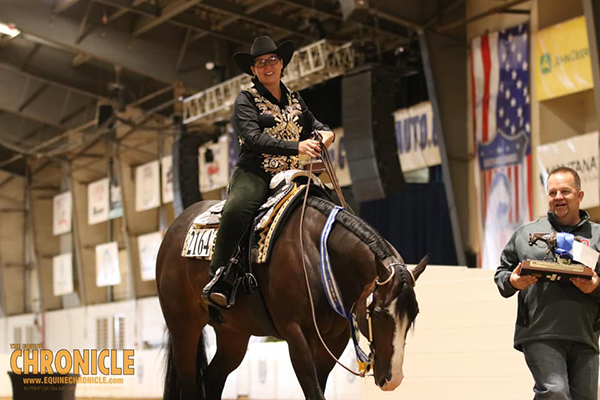 Although she’s no stranger to the Congress winner’s circle, Jennifer Paul’s win today in Junior Trail with 5-year-old Lazyboy was her first at the Congress with him, and her first time winning this particular class.

“William” is owned by the Mierzejewski family, who interestingly enough actually encouraged Jennifer to get her start in Trail. “I started doing Trail more when I became a professional,” Jennifer says. “Actually, the Mierzejewski family that owns Lazyboy tried to talk me into doing Trail. At first, I didn’t know about it, but then they got me talked into it, and I love it.”

Jennifer confirms that Trail is pretty much 50% training and 50% luck, and she feels blessed have had plenty of both in today’s class. “We started out with the walk poles, and I was hoping I had his attention so that he wouldn’t hit anything. Then, we had to back around the gate, which we’d never really done before, so that was really cool. All of his lope-overs came really easy with a nice cadence all the way through. I would have to say that he plussed his lope poles, because he shows so much expression. We just hit every mark today. We didn’t have a bad chip step and didn’t take off long.” 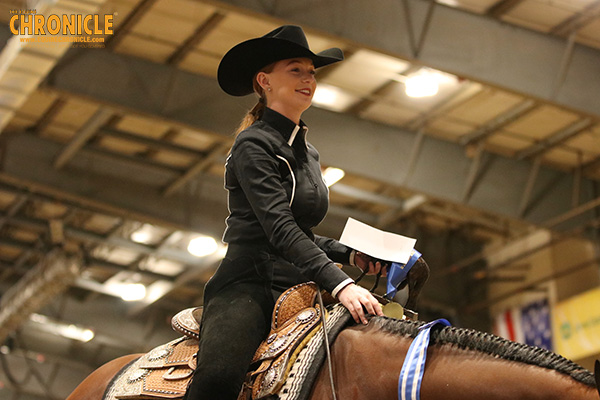 Nya Kearns just came off a win in Horsemanship at the AQHA Youth World Show with her 6-year-old Beau Ferdinand. However, she admits that Trail is not necessarily her strongest class. Still, she was named the Congress Champion today in Level 1 14-18 Trail.

“Trail isn’t necessarily my forte, but it’s definitely Beau Ferdinand’s favorite class. He helps me out a lot when I’m showing. He picks up his back feet a lot when he trots and wiggles his butt. He has a nice stride at the trot so it makes it easy for him.”

Nya’s plan for today’s class was to be very careful at the gate, because Beau Ferdinand is a large horse and the spacing was tight. “My plan was not to hit the gate! That was definitely the area I was very careful in, because it was close, but we managed it.” 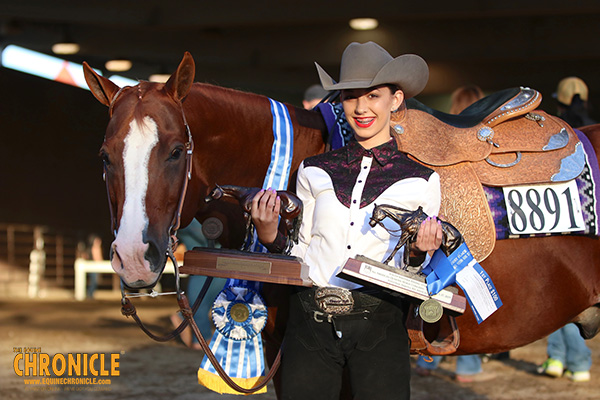 14-year-old Brooke Inchiostro and her 14-year-old gelding, He’s Absolutely Sure, won their first Congress Championship in 13 and Under Western Riding at their very first Congress! Brooke relies on the guidance of her father, Ken, and Jamie Dowdy to help prepare for all-around classes.

Brooke thinks that “Cruise” is so good in this particular class because of his willingness to please. “He’s willing to do whatever I ask. I just have to make sure that I count each stride and change at the right time.”

Brooke showed in a different Western Riding class a few days ago and came in third, after hitting the pole in both  preliminaries and the finals. So, her goal for today was to make it across without a tick!

“Also, I had to show pattern 1, which I’ve never shown before. I usually show pattern 4 or 2. You walk, trot, and then lope the short line before the cross overs. I’ve never had to lope down the middle before after all the changes, but he didn’t want to change again. He was great.” 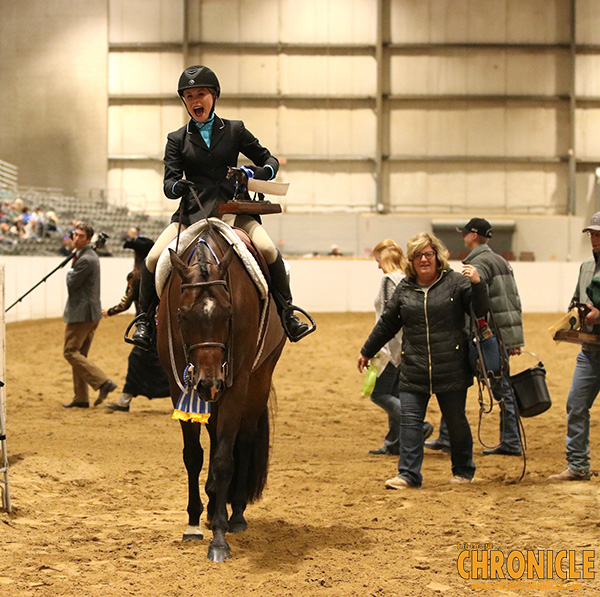 “I’m shaking, because I’ve dreamt of this my whole life. Every time I watch someone win, and they put the ribbon around their horse’s neck, I tear up and I want to cry. It’s exciting and unbelievable to have that moment; but what’s more exciting is that I’ve finally achieved what I wanted to achieve.” 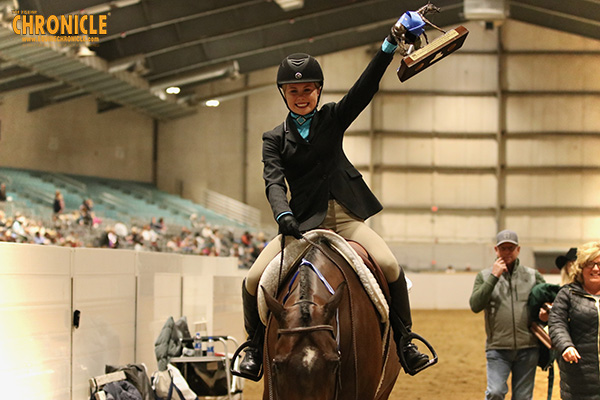 Avery’s favorite class to compete in is Horsemanship, and she has dreams of riding on a collegiate equestrian team. “OSU has always been my dream school, but I’m open. I just want to ride in college.” If she does ride on a college team one day, she will be well prepared for the hard work and dedication required as she already travels eight hours every weekend to ride her horse.

“I live in Mississippi and I travel eight hours to ride my horse every weekend, because he’s in Oklahoma with Leonard Berryhill. It’s hard and I miss a lot of friend group things, so finally being able to show my friends that putting up work can actually help you achieve something is amazing.”

“I’ve been working on trying to release my nerves, so, when I was in the line up, I thought, ‘Ok, I will put this in God’s hands.’ So, when I was talking to the other girls, they were saying that they just wanted to make the Top 5. But, at that point, I really didn’t care if I got last, because I already beat over 80 people to make it to the finals, and was happy to be where I was.”

Ali Eidson was thrilled to score her first Congress Championship in the Super Sale 2-Year-Old Non Pro Western Pleasure Stakes with her new horse of only three months, Made In The Moonlight. 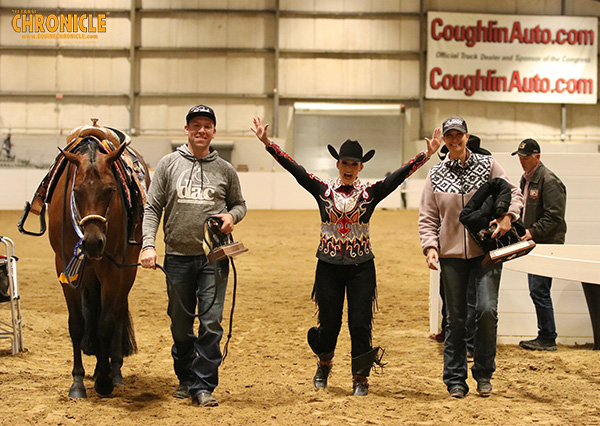 “I started out the year with Hez Blazin Trouble, which we just sold to Bonnie Sheren. So, I was horseless and I’d really thought I was going to have a big year with him doing the all-around. When we sold him, I thought my year was up and I would take my time and find something. So, the next weekend, we went to the ranch and Sara [Simons] wanted me to look at this horse. It was a done deal that day, so I was only horseless about a week!”

Formally an APHA girl, Eli has now completed her transition over to the dark side with her new AQHA gelding, “Stretch.” “I’ve just made the full transition to the dark side and it didn’t take a year! Also, this is my first Congress Championship, and it’s just icing on the cake to win it in Western Pleasure, truly.”

Thanks to the sale incentive purse, Ali and her Machine Made/Only N The Moonlite gelding walk away with a nice check for $5,838. “It pays for my Congress trip, my amazing trainers, and my mom!”