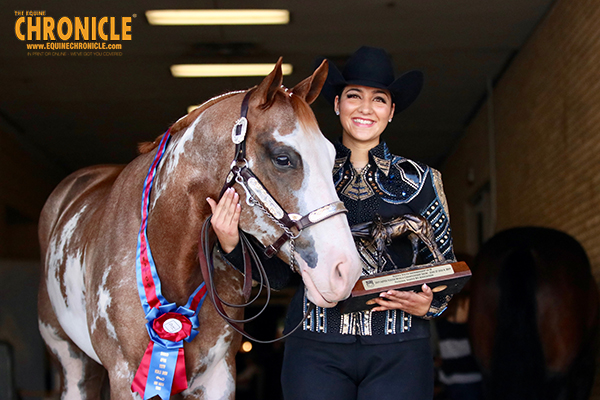 The first two Showmanship classes of the day are complete here at the 2019 APHA Youth World Show, and the two World Champions are both first time Champions here at the show!

First, Kelsey Kupferschmid led her 6-year-old “Itchy” to win Novice Youth 14-18 Showmanship. Kelsey and Itchy have been a team for only two years, but the 18-year-old has been riding horses since she was just ten, competing at open, 4-H, and Quarter Horse shows. Just last week, she won Equitation at the Pinto World Championship Show.

When Kelsey is at home in Illinois, her trainer is Carrie Lynch; but, here in Texas, she’s been working with Kristin Layher to hone her skills for the summer majors. “We worked really hard on making my trot circles really even on both sides and not cutting off the corners. Also, I needed to come in a straight line for my breakdown to the walk. It was important to be straight, because the judges were sitting right in the front and could see everything. For the trot circle, he has really long legs and is a great mover, so we were booking it.”

Earlier in the show, Kelsey and Itchy placed seventh in Novice Hunter Under Saddle and up next will compete in Horsemanship. Of all the classes they compete in together, Showmanship and Equitation are Kelsey’s favorites.

“I really like Showmanship now, because we’ve worked really hard on it. I used to hate it a lot, like a lot, but you just have to work really hard. It’s something that you can work on every day a little bit by sharpening stuff up to make it nice and flowy.”

Sadly, this is Kelsey’s last Youth World Show, and Itchy is for sale, because Kelsey is headed off to college. “I pushed myself really hard, and there was a lot of stress going into this show. But, you just have to forget about everything and focus on your pattern. It paid off.”

The Reserve Champion was Josie Eckert with The High Rise. Third was Lindsey Watland with A Subtle Impulse. Fourth was Brady Hattan with Yours Only. Fifth was Taylor Daniel with Who Sez. 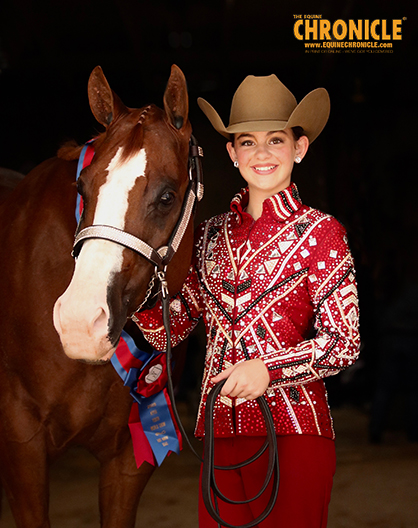 Another first time World Champion in Novice Youth 13 and Under Showmanship was 11-year-old Madeline Rippeon with her new horse, Famous N Foolish. Madeline might be new to the APHA circuit, but she’s been showing horses for the past six years. She originally started out with Quarter Horses, and this is her first time at the APHA World Show. It’s actually her first Paint show ever!

“I really like it,” she says. “I like that everyone is so supportive here and always says congratulations, even if you don’t really know them.”

Maddie and her horse have been a team for five months, and they’ve been with their trainer, Shannon Vroegh for just one month. “My horse is very nice. I’ve started to work with Western Pleasure a little bit more, and I feel like we’re going to do very well in that class. He’s also a great pattern horse, and he’s very talented in Trail.”

Maddie’s favorite classes are Showmanship, Horsemanship, and Trail. She throughly enjoys pattern classes because of the challenge. “I memorize the patterns really easily, so it normally goes really well. For this pattern, Shannon said I needed to make sure I look at the judges, have expression on my face, and not set up when I went to the judges. That’s because I needed to turn, back up, walk, and then set up. I was just supposed to do my job.”

This may be Maddie’s first big World Championship at a major horse show, but she does have several Reserve Championships at the NSBA World and Quarter Horse Congress. She will be headed to all the AQHA/APHA majors this fall, because her horse is double registered. 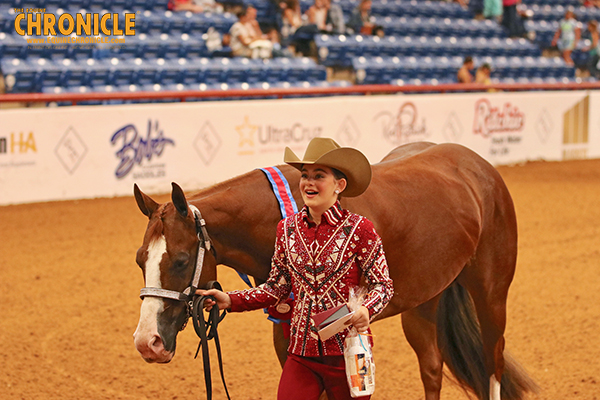 Even thought she’s only eleven, this eloquent, young competitor already has a big goal in mind for the future. “My biggest goal would have to be to do a victory lap while riding. At the Congress, we do that too, and I’ve always wanted to do that, or also to be High Point rider at the Congress or a Youth World Show.” 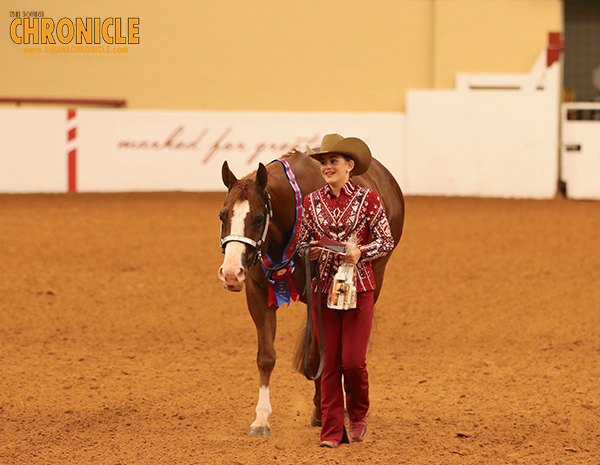 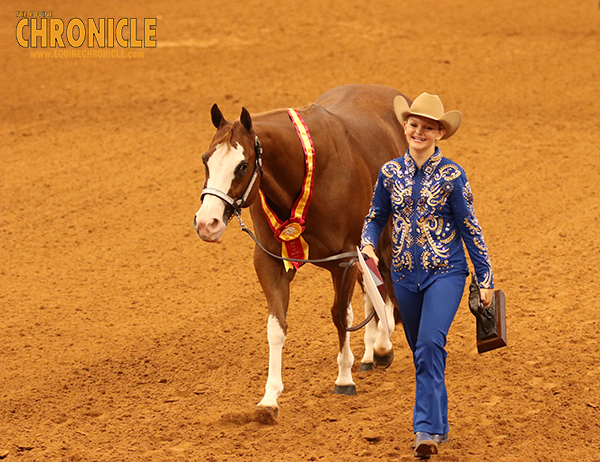 The Reserve Champion was Macey Lovelace with Izzy Charlie. Third was Blair Rozas with Amississippisensation. Fourth was Lauren Lauver with Sensational Bandita. Fifth was Peyton Staat with Sensational Satinrose.