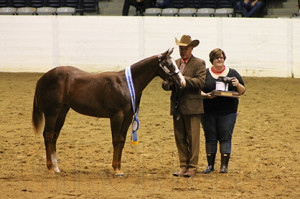 Randy Jacobs helped industry veteran, Karen Johnson, cross a big item off her bucket list this morning at the 2014 All American Quarter Horse Congress. Jacobs led Heza Sidewinder to a win in Weanling Geldings. Coming in Reserve was Andy Staton with I Am On Top for Melinda Clark.

Johnson’s beloved gelding “Jackpot” is by Heza Stemwinder and out of a daughter of Image Matters. There is a very interesting story behind how this particular colt received his barn name.

“The story is that I had a friend out in Idaho who raises sheep, and she’d been watching that mare online for days,” Johnson says. “They went to dinner at the casino one night, and she was trying to get the mare [live feed] up online. She just knew the mare was going to foal that night. She couldn’t get it up on her phone, so she asked the manager for their Internet password. The manager put it up on every TV screen in that casino, so all these people were watching that mare foal!”

“I had to pull him, because he was so big, and she said you could’ve heard a pin drop. When we finally got him out, she said it was like a football stadium during a touchdown, and the ladies at the table next to them were crying!”

For Johnson, who’s been riding and showing horses since she was just a tiny tyke, this Congress Championship means the world, especially since it was achieved with a home-bred.

“It’s just awesome,” she says. “It’s been on my bucket list. Ever since I was a little kid showing, I loved the big Quarter Horses, and I always loved the halter horses. Now that I’m a little older, I don’t ride as much, so I really enjoy Halter.”

Jacobs will also be leading a yearling gelding today for Johnson named The Secretz Out, by Telasecret. Just a few days ago, Jacobs’ led another one of Johnson’s horses, Shez That Girl, to a third place finish in Weanling Fillies.

Futurity- (sponsored by The Equine Chronicle)