Every Day’s a Gift For Breast-Cancer Survivor Julie Lewis 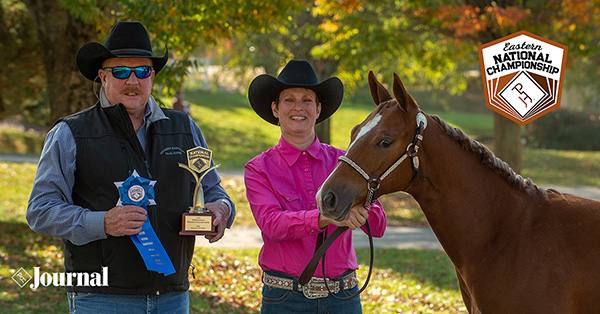 For Julie Lewis, every day spent with her family and her horses is a gift. The horsewoman from Hollywood, Maryland, has battled through breast cancer treatment since October 2018, beating the disease in February 2020—she’s been cancer-free for six months, so far. In celebration and in an effort to live everyday to the fullest, she made plans attend the 2020 APHA Eastern National Championships in Viginia with her homebred 2020 sorrel solid filly Ima Toys R Us Kid and her 2019 palomino solid mare Shiners Chex Mix.

“My motivation has been my breast cancer and knowing tomorrow isn’t promised,” Julie said. “I have goals for next year, and I feel this filly could show at the World level next year, so why not go [to this show] and have an experience of a lifetime?”

Showing Ima Toys R Us Kid is extra special for Julie and her husband, Paul—the couple bred “Reba,” who is sired by their 26-year-old homebred stallion CC Great Zann Pine. He has just a handful of foals—they’ve been selective in the mares to whom he has been bred—and they’re excited about the filly’s future, first in halter and later as a riding horse.

“I knew from the time she stood [after birth] that she was going to be something special, and her personality is off the charts,” Julie said. “She’s a big talker—back at the barn, she’s the first to have something to say.”

“I’ve got a lot to learn. Every time I go in the pen, I learn something new,” Julie said. “I know we have a lot to work on, but we’re going to get there. I think you’ll hear her name in the future!”

For now, though, the horses continue to serve as ongoing motivation for Julie—the animals, along with her barn family, were instrumental in her recovery, and she’s got a strong support system cheering them on virtually.

“She’s not just our horse, she’s the farm horse,” Julie said about Reba, who’s name is an homage to Julie’s own mother, a retired Toy R Us executive who passed away just before the filly was born.

“This has been a lot of therapy for her,” Paul said. “She never did give up—she’s been a dynamo all through it—but this was something that gave her a push to keep going. Everyday is a gift for us right now.”