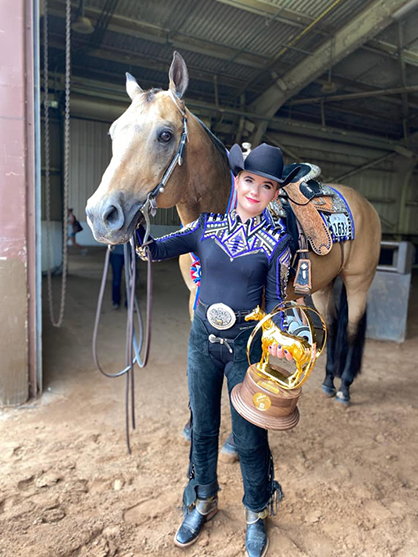 For Emma Gore, this final class at the AQHA Youth World Show was a little bittersweet. Emma was the returning World Champion from 13 and Under Horsemanship last year, but it was with a different horse, her sweet, red, roan mare- My Only Good Shoes.

Here at The Equine Chronicle, we remember that day well. 2019 was only the second year that AQHA had offered 13 and Under classes, which allowed a then 11-year-old Emma to compete against her peers of a similar skill level. Although Emma had won multiple Congress Championship titles, that was her first World Championship.

Sadly, “Dottie” passed away in March of this year, which left Emma without her beloved partner and a mount for the 2020 show season. Luckily, the family owned a 16-year-old stallion that they thought just might fit the bill as Emma’s new horse. But there was one little problem… After that was solved, Emma and Krymsun N Gold hit the ground running. 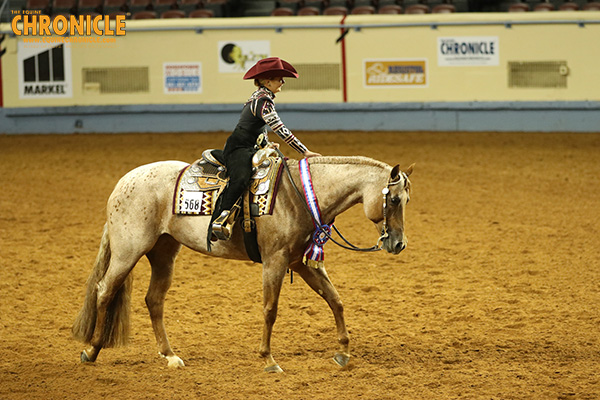 “King is the sweet horse I’ve ever had,” Emma says. “I was very excited about today’s class and wanted to win the golden globe. My trainers [Judd and Jennifer] told me to have a nice, fast walk in and jog down the chute and over the hill into the pen on purpose with some speed. That was the judges’ first impression. They said to keep my arms back and tight and my shoulders back.”

What’s Emma planning to do with all those trophies? “They’re going in my trophy room!” We’re certain she will find a place of honor for this special golden globe, perhaps right next to the one that she won last year with her late mare, Dottie.

The Reserve Champion in the class was Isabella Buckley with Roses Only. Third was Camille Kennedy with The Perfect Kryme. Fourth was Shaelyn Boutelle with Beau Patrick. Fifth was Piper Keller with Sweet Made.