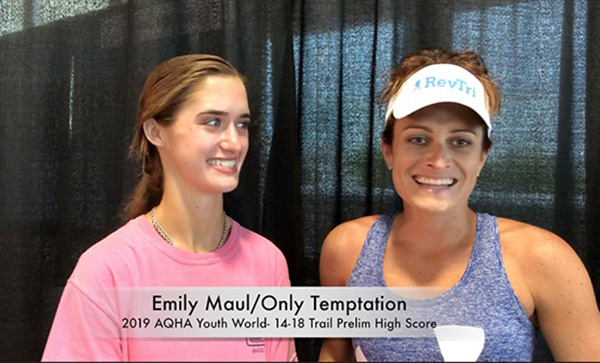 After a long day of Trail preliminaries, 21 horse and rider teams received high enough scores that they were invited to the 14-18 finals on Tuesday. One team received the highest score of the preliminaries- a 248.5- Emily Maul with Only Temptation, aka “Lefty.”

The competition was stiff, as the second place competitor was only one point behind Emily. “It was very tough competition and very good competition,” she says.

Trail has traditionally been one of Emily’s strongest events. She was the World Champion in the class in 2015. But lately, she’s been putting a lot of work into her Horsemanship performance as well, and she made the finals in that class too.

“We did Horsemanship and went through the whole process of trying to get into the finals and the semi finals. Then, they called 15 back for the finals, and we did make it. That was really cool, because we’ve been working really hard on it. After that, Lefty was really tired, so we let him rest and eat some food hoping he would perk back up, and he showed phenomenally for me.”

Every year Emily has shown at the Youth World Show with Lefty, they’ve made it back to the Trail finals, an accomplishment she’s very proud of. “It’s pretty cool. We’re very blessed.”

Assisting Emily and Lefty in Trail, and all of her Western performance events, are her trainers, Bruce Vickery and Anthony Montes. “I’ve definitely learned a lot from Bruce in the Trail, as far as how to lift Lefty up, so he goes over the poles better and uses his body. Before we even went to Bruce, he was an overall, really good horse, but Bruce helped us with figuring out that little extra lift, where to get over the poles, how to get over them, and how to ride every pole. It has helped phenomenally.”

In the past, having the high score heading into the finals has boosted some competitors, providing an extra bit of confidence; but, for others, the pressure has proven to be too much to handle. Emily has excellent perspective and a plan.

“I would say it’s a clean slate once I get to the finals. I’m happy and what happens is going to happen. I’m very confident in Lefty and myself, and I’m so excited to see what he can do, and what I can do, and I hope it goes well.”

Following the conclusion of the AQHA Youth World, Emily won’t be headed to the NSBA World, because she’s off to Oklahoma State University where she will be competing on their equestrian team.