Emily Maul Named Congress Champion in 12-14 Trail With Only Temptation AND Reserve with Hez Raising The Bar! 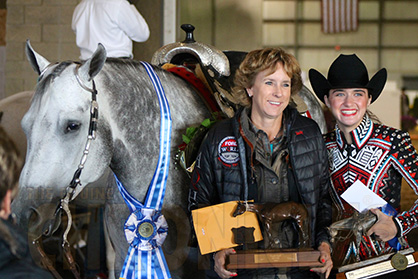 The Celeste Arena was the site of total Trail domination this morning at the All American Quarter Horse Congress. 15-year-old Emily Maul was not only named the Congress Champion with her horse, Only Temptation, she was also crowned the Reserve Champion with Hez Raising The Bar! We caught up with sweet Emily following this unprecedented performance.

Although there were 47 entries in the Trail class this morning, Emily happened to draw two close spots in the working order. She was first up in the arena on her back gelding, Hez Raising The Bar, aka “Junior,” in the 8th spot. Then, she showed her gray gelding, Only Temptation, aka “Lefty,” in the 20th spot. 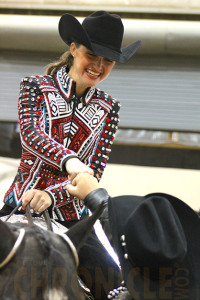 “Junior is pretty green in Trail,” Emily says. “He’s only been doing it for six months now, so I kind of liked how I was able to go in first with him, knowing that he’s greener. Lefty is pretty solid in Trail; there’s no doubt about it. We work pretty well together.”

“There were a couple of things with Junior’s pattern that I was anticipating for Lefty, like the bright lights that he wanted to look at in the chute. Knowing that, I adjusted things a bit more with Lefty.”

There was a number of scratches this morning, so Emily’s second draw came up quickly. Luckily, Lefty doesn’t take too much preparation time. “Lefty doesn’t take that much riding over the poles,” she says. “You just kind of go in and do the pattern.” 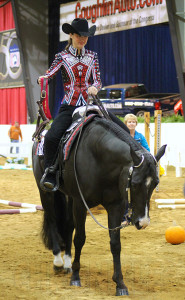 At the 2015 AQHA Youth World Show, Emily and Lefty were named the World Champions in Trail. This year, Emily and Junior placed fourth and Lefty was a finalist. The last time Emily won a Congress Champion title was back in 2011, in the Cooper Arena, when she was named the Champion in 11 and Under Trail and the Reserve Champion in 11 and Under Showmanship. This is her first time back to the Congress in two years, due to her busy school schedule. If her impending flight will allow, she hopes to ride Lefty in one more class, 12-14 Western Pleasure. Regardless, she is beyond thrilled to be heading home a Congress Champion and Reserve Congress Champion with her two, favorite horses. 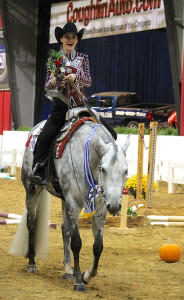 “My coaches and family have the same thought process that I should just go out there, enjoy my ride, and make the best of it. That’s kind of what I did. Of course, being one and two feels really good, but I was just happy with my goes!”

Emily has competed under the tutelage of Leslie Lange and Jeff Mellott for the majority of her youth career. She let us in on why she thinks they make the perfect team. “Leslie is a really laid back person when she rides. She’s very calm with the horses. I’m completely the polar opposite. I’m kind of uptight, and I get a little nervous. After all these years, she’s loosened me up.”

“Leslie works with Lefty, mostly, because they get along, and then Jeff works with Junior. Jeff is the critique person. Put them together, and they’re one mean machine! They’re great coaches, and I’m so glad I have them.”

Congratulations Emily on this exciting accomplishment! 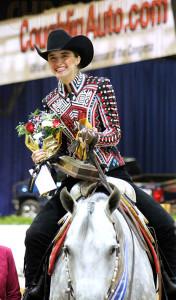