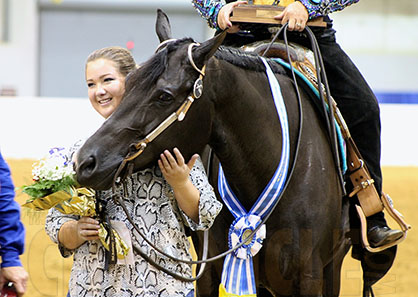 This was a special one, from the 2016 Quarter Horse Congress, when the incomparable A Certain Vino, claimed his last Congress Championship in Senior Western Pleasure.

Tonight was an emotional evening, one for the record books, as the incomparable A Certain Vino loped his final steps in a Senior Western Pleasure class at the 2016 All American Quarter Horse Congress. Both trainer and exhibitor, Karen Hornick, and owner, Darcy Reeve, were overcome as “Vino’s” loyal fans swarmed the out gate upon his exit.

We caught up with both Darcy and Karen to chat about this record-breaking Congress Championship title earned by “Vino.”

“This horse show and the World Show will be Vino’s last time in the show pen,” Karen says. “Then, he will retire to the Reeve farm in Garden City, Kansas to enjoy his retirement and be a horse.” 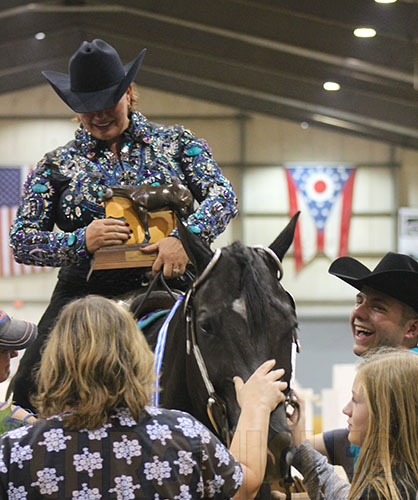 It’s been quite the journey for Team Hornick, who first discovered Vino at the beginning of his three-year-old year. The striking, black gelding is now 13 years old.

“I got him the beginning of his three-year-old year and kept going,” she says. “It was a ride I will never forget. I’ve always searched for the next horse that could feel like him, and be like him, and I never have. He’s one-of-a-kind.”

Most people are familiar with the steady-eddy, unbelievably consistent show horse that is A Certain Vino. But we asked Darcy and Karen to tell us something about Vino that most people don’t know. “He loves to steal every ounce of hay or grain, and he will run to it and jerk the reins out of your hands to get it,” Karen says. “There’s no stopping him, and we let him do it!”

“We always call him ‘the bad pony,’ because he will do things that any other horse would get in trouble for, but we let him get away with it, because he’s Vino,” Darcy adds. 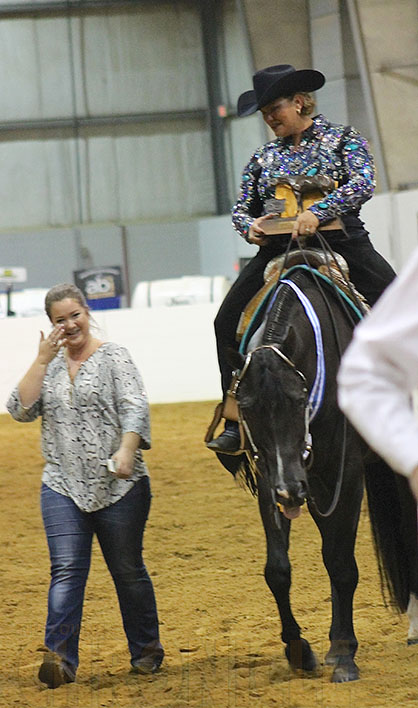 What has enabled this horse to be so successful, year after year, as he approaches retirement with a win sheet most only dream of? “One thing about him is his natural ability,” Darcy says. “He had so much time off and then we just pulled him out of his stall and he moves the same way he always has. He loves his job, and that’s the number one thing you need to find: a horse that loves his job. No matter what happens now, it’s a sweet ending.”