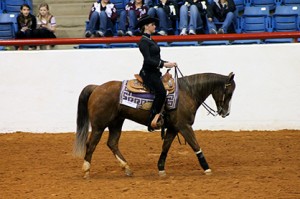 FORT WORTH, Texas – The No. 8 ranked TCU equestrian program will open its spring season Friday night hosting Delaware State underneath the bright lights of the Fort Worth Stock Show and Rodeo.

The two-day meet will begin on Friday in Fort Worth and continue through Sunday at Turning Point Ranch in Springtown.

“We are so excited to host Delaware State for the Stock Show on Friday night. We look forward to this meet all year long. Its very fun for our team, parents and fans. This will be DSU’s first time to compete at the Stock Show and I think they are just as excited!”

Friday’s section between the two foes will consist of only five Western riders from each team and start at approximately 5:00 p.m. CT at John Justin Arena. On Sunday, the two teams will wrap-up competition with Hunt Seat action at 10:00 a.m. CT.

“We are extremely ready and excited to kick off our spring season with the Stock Show Duel against Delaware State,” said TCU Director of Equestrian Haley Schoolfield. “Our riders and horses are mentally and physically prepared, so we are looking forward to our performances.”

A full recap and final results will be available following both days of competition on GoFrogs.com. During the meet, live results will be made available at the official TCU equestrian twitter page. Fans are encouraged to follow @TCUWEquestrian.

TCU and Delaware State will battle for the seventh time in program history this weekend. The Frogs have never lost to the Hornets in six tries, which includes a 17-2 victory last March that saw TCU claim all four MOP accolades.

TCU is 2-1 all-time inside John Justin Arena, having claimed victories over Texas A&M and Baylor, respectively.

Last year, No. 8 TCU cruised to a 6-3 victory over No. 6 Baylor. The Horned Frogs dominated the Bears in Reining, claiming a 3-1 decision. The Purple and White outscored Baylor by a score of 345-338.

In 2012, then No. 8 TCU battled No. 3 Texas A&M in front of an electric crowd of 2,104 spectators, but narrowly fell to the defending National Champions at John Justin Arena, 5-3.

TCU comes into Friday’s showdown looking for its fifth win of the season. The Horned Frogs are currently No. 8 in the national polls and are 4-3 on the season overall and 2-1 in league play.

Several individuals have scored impressive victories during the 2013-14 campaign.

On the Western side, Alexi Child will look to improve to 7-1 in Reining on the season. The Oregon native has claimed two MOP accolades and is 3-0 in Big 12 action. Junior Calli Rouse has garnered four victories in Horsemanship with one MOP, while Katelyn Gray has been solid in Reining, posting three victories, two of which have come against league foes.

“I’m looking forward to getting the spring season started,” said head Hunt Seat coach Logan Fiorentino. “We are competing against a Delaware State, a team that is coming off of a couple of big competitions. I expect them to bring their A-game. We’ve been working hard since the end of the fall semester to strengthen ourselves overall and I’m excited to see the hard work pay off. We need to go out and ride at the level we are capable of riding to really set the tone for the rest of the spring as we look ahead to the Big 12 and NCEA Championships.”

Delaware Sate comes into this weekend, sitting at 1-6 on the season after falling to No. 3 Auburn and No. 7 Oklahoma State in its last two outings. The Hornets dropped an 11-4 decision to Tigers before falling to the Cowgirls, 16-4.

Against Auburn, DSU claimed a 3-2 decision in Horsemanship and earned three MOP honors, including two on the Hunt Seat side. The Western team came back against OSU and posted another 3-2 victory in Horsemanship. Individually, Alaina Halter and Alexis Gratowski went 2-0 in the discipline to open the spring campaign.

For only the second time in the four-year history of the Stock Show Dual, the Hunt Seat program will also be in competition. The squad will begin action in Springtown Sunday at approximately 10:00 a.m. CT. The 2014 version of the meet will also mark the first time in program history that TCU will play someone not from the state of Texas.

Directions To The Stock Show

Museum Parking Lot- Located at the northeast corner of Montgomery Street and Harley Avenue south of the National Cowgirl Museum and Hall of Fame, the lot is accessed on the north side of Harley Avenue for west bound traffic only.

TCU will continue action on Saturday, Feb. 15 at Baylor in Waco.