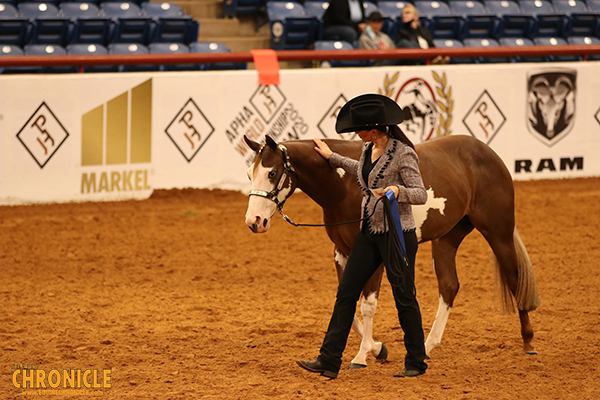 Calli Rouse was at the lead of My Sweetest Loper to win Yearling Longe Line for Jana Simons at the APHA World Show this morning. Reserve was Kevin George with She Blue Them Away. Third was Nicole Dalton with TWF Candy Coated. Fourth was Lindsey Burleson with Sweet Shade Of Ted. Fifth was Shane McCord with Creepin Pass Me.

“Elvis” is by Lopin My Best and out of Special Ingredient, who also happens to be the dam of The Sugar Daddy. He was bred and raised by the Coughlin family and is now being leased by Jana Simons. At the recent NSBA World Show, Elvis claimed three Reserve World Championship titles. 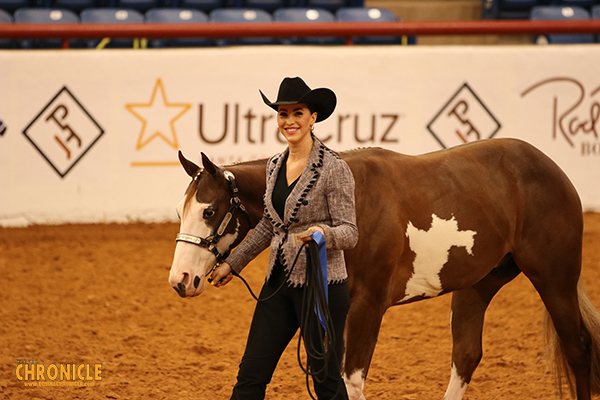 “He was a very easy horse to train,” Calli says. “I look for their brains first to see if they’re going to be willing and trainable. Body size and maturity is also really big in Longe Line, but if they have the right brain and want to be a good horse, then it makes it a lot easier. He’s great minded and talented. I’m looking forward to seeing him under saddle.”

When working her yearling Longe Liners at home, Calli tries to keep sessions short and sweet. The primary focus is on fitness and introduction to new stimuli. “Once they learn their jobs, I try not to overdo it. Maybe ten minutes, at most. I get them fit and then take them out to see things. I don’t do a lot on the line once they know their job.” 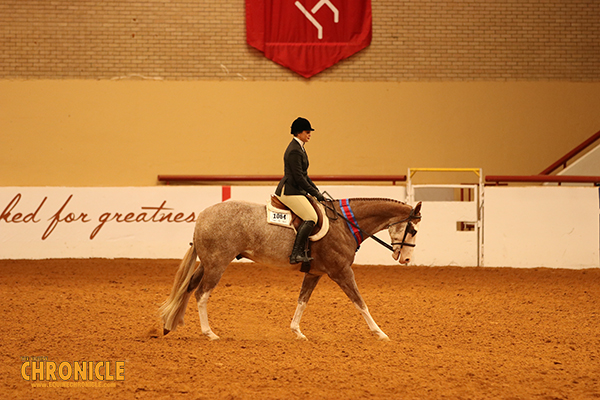 Winning Novice Amateur Equitation was Samantha Sullo with Time Well Spent. Reserve was Jacqueline Penny with Kiss Me At Twilight. Third was Amber Harmon with Who Sez. Fourth was Tawny Langenfeld with Kewl Zippin Strider. Fifth was Kayln Epperson with Endless Sensation.

Samantha was shocked when she was named the World Champion with her 5-year-old gelding “Blue.” The team just started competing in all-around classes this year, and this is Samantha’s first buckle and World Championship title.

“I got him when he was a weanling and started him myself,” she says. “I took him to his first show and did great, but my dad and I got into a truck and trailer accident on the way back. He was already behind as a two-year-old, because I started him myself, and then we got really far behind. He was never lame or anything, just sore. Then, I sent him to Erin Fick, and she really helped make him into what he is now.” 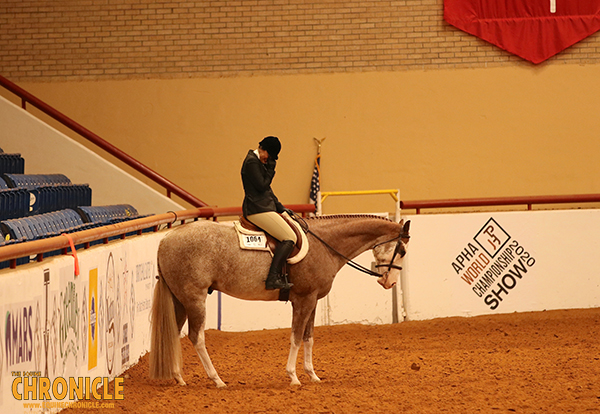 Later on in the show, this team will compete in Showmanship, Horsemanship, and Hunter Under Saddle. But Samantha was happy to start out with their best event. “He’s got kind of a small brain, and he’s a little ADD, so he’s very focused and tries really hard in Equitation. We’ve been the circuit champions in this class at every horse show we’ve gone to this year, so we were hoping we could pull it out.”

Surprisingly, the best part of Blue’s pattern was his lead change, which is a new maneuver for the green horse. “I also really liked our circles. He arched and was supple, and he came down to the trot well. It was harder to get the diagonal because it was a left lead canter to a left diagonal. The back and walk off the cone could’ve been a little better, but all in all, he gave me a great pattern.” 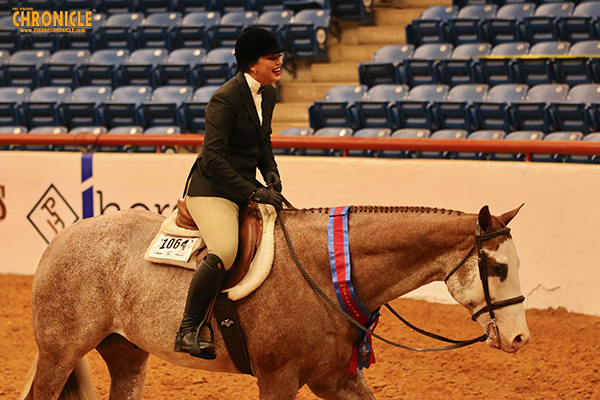 Overall, Samantha is shocked and in disbelief that she’s now a World Champion. “I have wanted this for so long. I used to watch the World Show, and I would cry with excitement when other girls won, because I wanted to win so badly. I’ve wanted to win Equitation since I was ten years old. It’s been a long time coming. I’ve tried so hard for so long, and I didn’t really believe I could do it. Nobody knows who he is. He’s just a Florida-bred baby who gave me his all.” 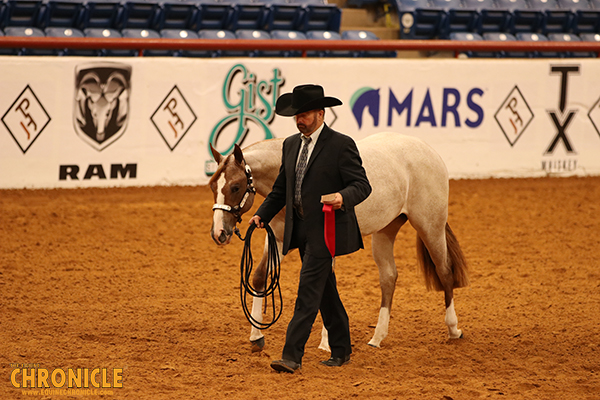 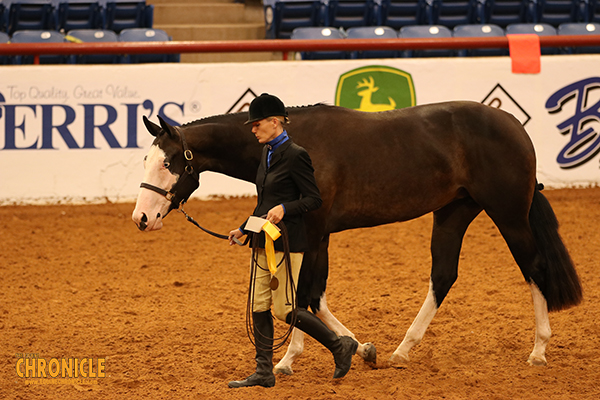 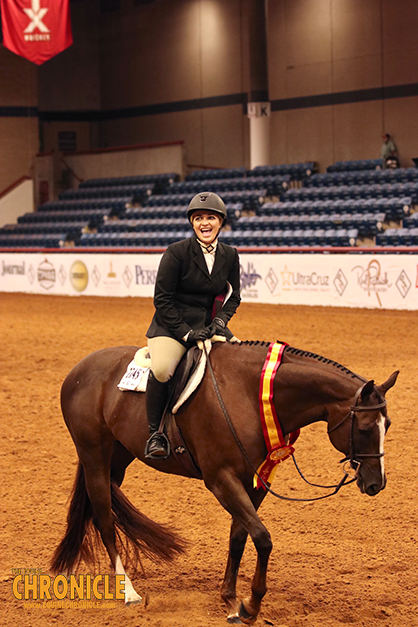 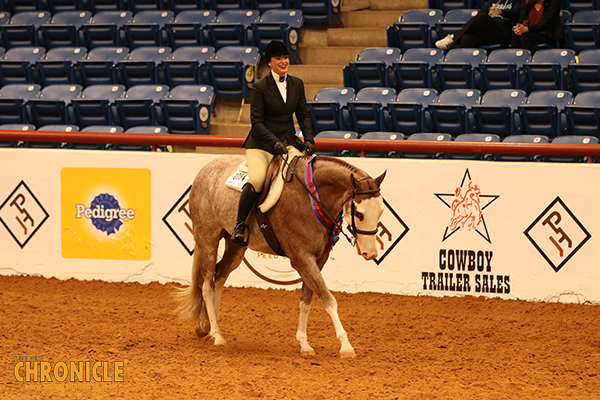