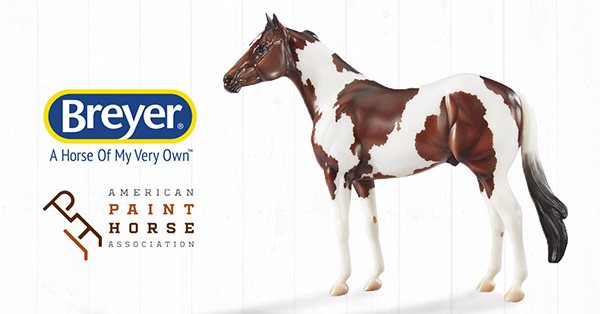 The art of legendary Western artist Orren Mixer continues to enchant new audiences through a creative collaboration with the equine experts at Breyer Model Horses® and the American Paint Horse Association. Breyer and APHA are excited to share that the second release in The Ideal Series, which is inspired by the works of Orren Mixer, is the ideal American Paint Horse.

An Oklahoma native, Mixer was best known for his paintings depicting livestock, sweeping scenery, and the Western lifestyle. He had a gift for capturing the equine form, which led to many equine breed associations commissioning him to paint their breed’s ideal – and most of these images are still in use today. While Mixer passed in 2008, his body of work has cemented his place as one of America’s most preeminent equine artists.

APHA and Mixer first intersected when the owners of Yellow Mount, the first APHA Champion, commissioned Mixer to paint a portrait of their stallion. This painting was later adopted by APHA for use in promotional materials. Separately, Breyer also produced a model of the famous Yellow Mount from 1970-1987.

In 1992, APHA celebrated its 30th anniversary and commissioned Mixer to create a painting to commemorate the occasion. Titled “The American Paint,” this piece prominently showcases an overo and a tobiano amidst a pastoral landscape, with a series of smaller paintings below showcasing the versatile Paint Horse in multiple disciplines. Encased in a custom wood, leather, and rope frame crafted by Mixer himself, this piece hangs in the APHA headquarters in Fort Worth, Texas, which is also home to two other APHA-commissioned Mixer pieces, “The Look of Eagles” and “The Sire.”

The proud tobiano from “The American Paint” can now be appreciated as a Breyer model! Just like no two Paint Horses are alike, no two Breyer models are ever exactly the same. Each authentically sculpted model is meticulously hand-painted, making each a unique collectable that’s perfect for display while also being durable enough for play. The American Paint Horse Ideal is a traditional (1:9 scale) model, and is available through APHA’s retail and online store at phbarndoor.com.

Breyer Animal Creations is a division of Reeves International, Inc., a family-owned, NJ-based toy manufacturer and distributor. For over 70 years, Breyer has championed the horse and other animals, and is dedicated to the creation of authentic and realistic model horses for play and collecting. More than just a brand, Breyer is a community – complete with an annual model horse festival and horse fair called BreyerFest, which is held annually in July. Learn more at BreyerHorses.com.

The American Paint Horse Association is the world’s second-largest equine breed association, registering more than a million horses in 59 nations and territories since it was founded in 1962. APHA creates and maintains programs that increase the value of American Paint Horses and enriches members’ experiences with their horses. Learn more at apha.com.