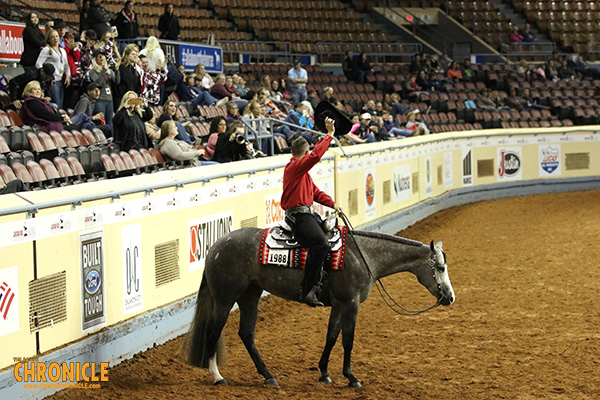 In only its second year, the Pleasure Versatility Challenge drew a big crowd to the Jim Norick Arena tonight to see which horse and rider team would conquer the challenge and take home a $10,000 check. In the end, Blake Weis and Snap It Send It were named the winners in the Pattern section and Western Pleasure section, so with a top ten placing in the Conformation portion, they were a lock for the overall win.

Looking on from the stands was owner, Kent Ray Taylor, and his whole camouflage-laden crew, who cheered during every part of the event and added their enthusiasm to the already exciting atmosphere.

Snap It Send It, aka “Bailey,” is a 3-year-old gray mare that has a notable namesake for a mother, former AQHA World Show Superhorse, Snap Krackle Pop. Tonight, Bailey did her mother proud by exhibiting some fancy lead changes, precision pole work, and smooth moves on the rail to take the win. According to Blake, Bailey is a literal carbon copy of her mother, Brandy, in both attitude, movement, and looks. But even thought Bailey had the pedigree, she was a bit of a slow starter, which is exactly what this type of class was created for. 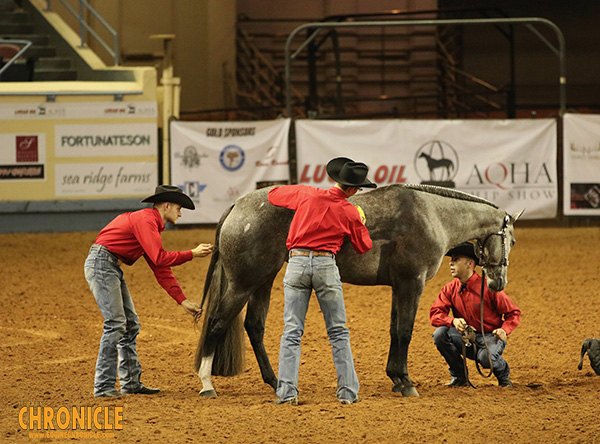 “Two years ago, after the World Show, I dropped Bailey off at Aaron Moses’ place,” Blake says. “We raised her, and she was born at my mom’s farm. After he’d ridden her for a while, he called and said that we were not going to show her as a two-year-old. We were going to wait until she was three. So, we started showing her this year, and here we are!”

Aaron explains why he thought it would be best to wait on Bailey until her three-year-old year. “I saw a lot of talent in her, but it wasn’t quite all put together yet. We could’ve shown her as a two-year-old, but we would’ve wasted her doing that, so it made sense to wait until she was three. She got so much better with that extra year and has been a great horse.”

Kent Ray Taylor couldn’t be more pleased with his horse and the team that he has created, who have careful molded her into the promising western all-around horse that she has become. “Aaron brought her out to Arizona, and I rode her for the first time there. The second time I got to ride her was when I came to the NSBA World, and I showed her the very next day. That’s a testament to this man’s talent. We went in the pen and had a phenomenal NSBA World and Congress. I can’t even tell you how talented she is and how pleased I am. But, even if we hadn’t won so much this year, the whole experience has been amazing and fun. I have an amazing team and a brilliant horse. I couldn’t be luckier.” 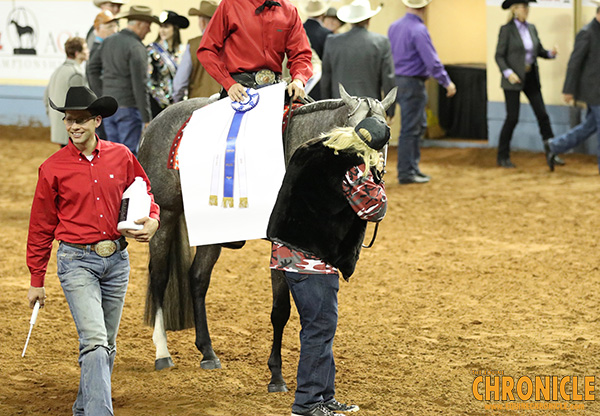 A longtime competitor, Kent is always looking towards the future for ways we can improve the industry to ensure its sustainability. He believes classes like the Pleasure Versatility Challenge are just the ticket.

“First, we need more horsemen like Aaron, who have the guts to say that we may need to wait on a horse until it’s three, instead of showing it as a two-year-old, if it isn’t ready. Also, I love Western Pleasure, but we need to find way to make it more exciting and to bring the numbers back up. There are things we can do to make the industry better. Maybe we even need to try a 4-year-old event. It’s all about trying to do things that sustain these horses over time. Great horses with great people can go on forever. It’s all about the way they’re started, the way they’re maintained, and the trainers making good decisions for the horse’s future, for a lifetime, not just for a year.”

Congratulations to the Reserve Champion in the class, Jennifer Paul and Sloww Motion. Third was Stephanie Armellini with Shootin The Breeze. Fourth was Chad Evans with Extremely Salty. Fifth was Sara Simons with Vital Intuition.

Scroll below for more fun photos from the event. 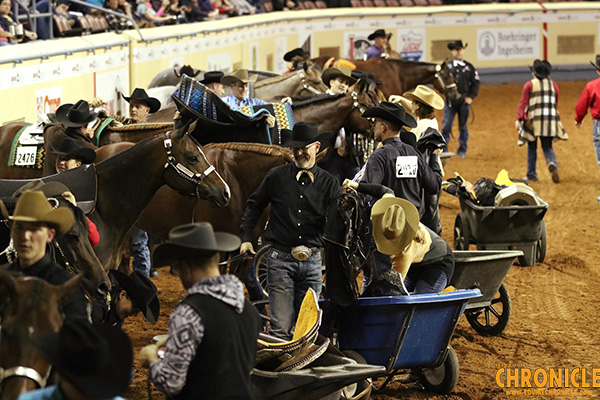 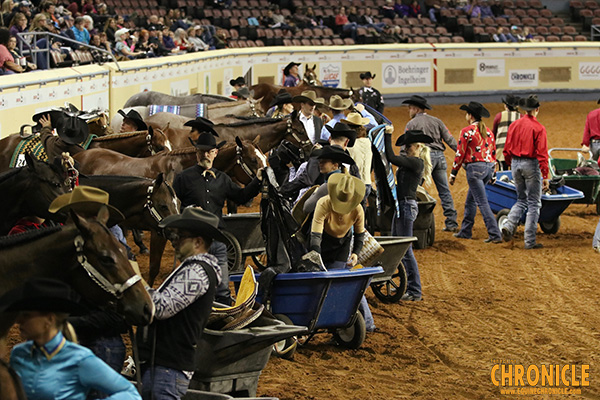 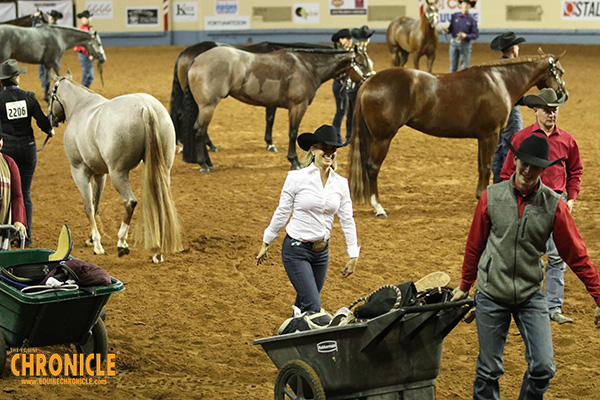 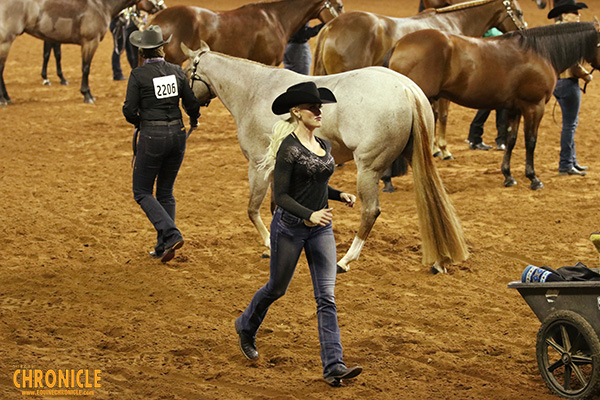 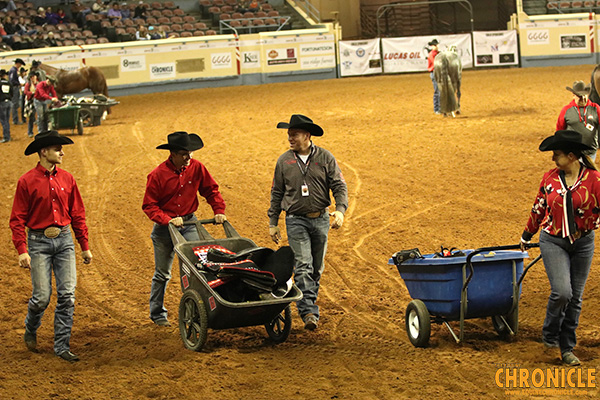 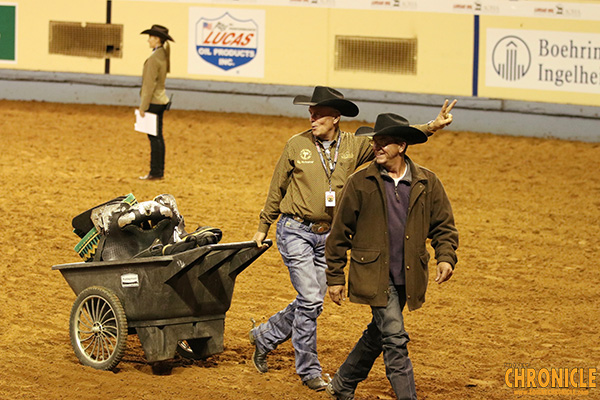 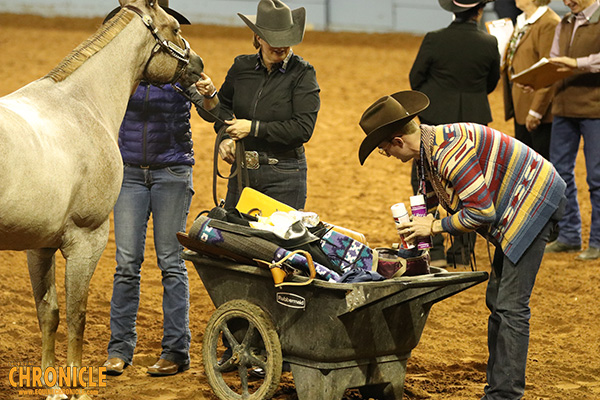 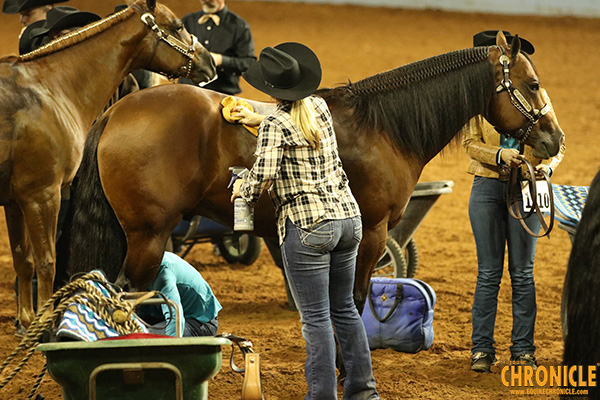 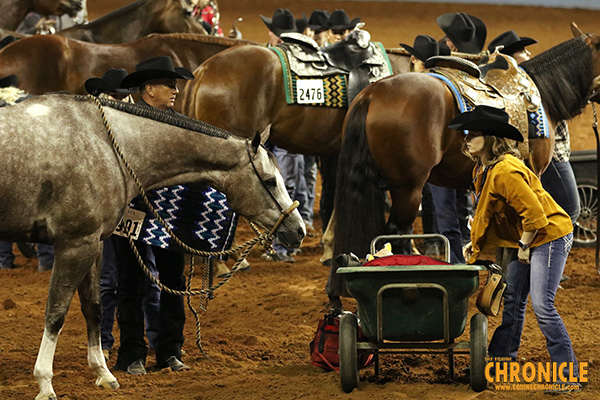 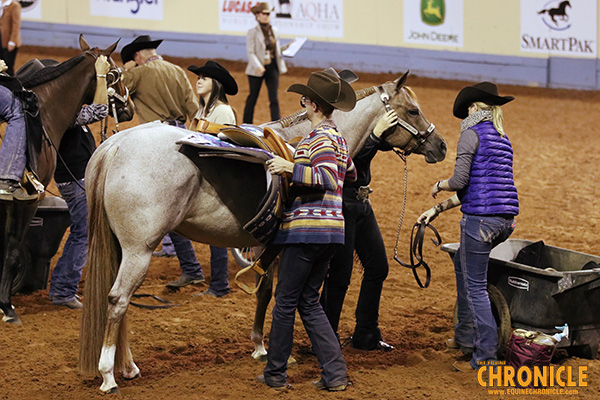