November 16, 2022 | Filed under: Around The Ring Galleries,Featured,Show Results & Gallery | Posted by: Delores Kuhlwein 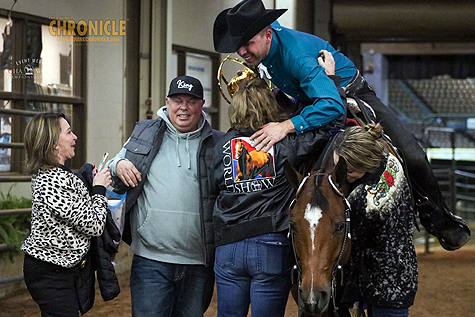 After an historic ride-off on Tuesday at the AQHA World Show with Jeffrey Johns to break a tie between his horses, KM Flat Out The Best and Nothin But Nett – the latter who won the ride-off – it happened again Tuesday in the very next trail class.

The other ride-off to break a tie for Champion and Reserve came on the heels of the first, this time in L3 Junior Trail, between Sara Simons with Ms ExtremelyHotChips for owner Sid Karr, and Blake Weis with Hot Lopin Lily for owner Caroline Cavallo.

Though they both scored 239, the World Champion crowned was Hot Lopin Lily with Blake Weis! Blake said the ride off was nerve wracking.  “But if it can be on anyone, I love that it is on this horse, Lily. She’s very reliable and super careful, and she has so much style,” he says. Blake explains that there were parts of the pattern that improved in the ride off, however.  “In the finals, I chipped into my right lead lopes a little bit, and normally I go long, so that threw me off.”  He says he learned from his mistake and rode seven instead of six in his lopeovers.

Since his teal shirt looked familiar, we asked if it was a favorite, or a lucky shirt, and he says indeed it is.  “I’ve won quite a bit in this shirt; I’ve won the Junior Trail three or four times in this exact same shirt, and when I saw the back-through, I said, ‘I have to wear my lucky shirt!'”