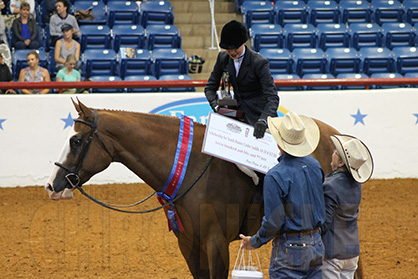 18-year-old Alysia Nielson achieved a big milestone this afternoon at the 2016 AjPHA Youth World Championship Show. She rode her new 7-year-old gelding, BMQ The Jig Is Up, to win an impressive 14-18 Hunter Under Saddle class.

“Ziggy” is no stranger to the winner’s circle having racked up multiple APHA World Champion titles and other accolades over the years with various riders like Tami Dobbs, Kimmy Shidler, and Anne-Marie Fortenberry. Alysia and Ziggy have only been a team since the beginning of this year, but they already seem to have formed a picture perfect partnership. 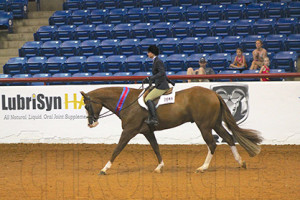 “Buying Ziggy kind of happened out of the blue,” Alysia says. “We were in an in-between stage with horses, because this is my sister’s first year in the 14-18 division. Ziggy was for sale and ultimately we decided to go with buying him. Honestly, it was probably the best decision we’ve ever made!”

At 17.2 hands tall, Ziggy is certainly “ginormous,” as Alysia likes to describe him, but this gentle giant has a heart just as large. “He’s super sweet,” she says. “He’s such a kind horse, and I don’t think he even knows he’s that big. He’s so honest and will do anything you ask him to do.”

Apparently, that included a few flying lead changes, just for fun, during the pair’s victory lap. “We are showing in Western Riding, so I thought I’d practice early!” Alysia jokes. “Honestly, my favorite part about him is his canter. It’s so lofty and slow, and it’s so different than any other horse I’ve ever ridden. I love the way it feels. When I’m in the arena with him, it’s my favorite thing to do.” 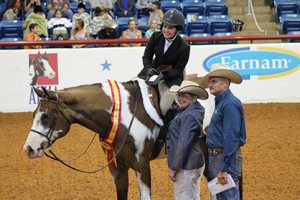 Despite Ziggy’s prior success in the Hunt Seat pen, Alysia certainly didn’t expect that she would be named the World Champion. “I didn’t want to psyche myself out. I was just thinking about the worse case scenario, because I didn’t want to let myself down. But the fact that I actually did so well was so surprising.” We were wondering what that worse case scenario might be… “My sister and I were talking about it, and she said, ‘What if you fall off?” That could happen!” 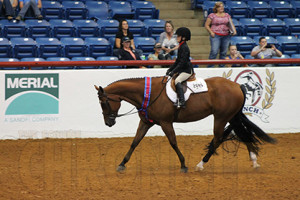 The Reserve Champion in 14-18 Hunter Under Saddle today was Mackenzie Chapman with Timeless Assets. Third was Mary Katherine Camp with Radicalized. Fourth was Josephine Mootz with All About The Ride. Fifth was Rebecca Figueroa with Just Say Whoa.

In 13 and Under Hunter Under Saddle, Lauren Gralla was named the World Champion with A Sudden Legacy. The Reserve Champion was Alexa Rogers with Gotta Be Sensational. Third place was Lillian Woodruff with All Or Nothin. Fourth was Kristen McPherson with All Right All Ready. Fifth was Sage Winters with Huntin Love Letters. 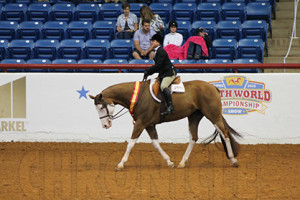 Winning Walk-Trot Hunter Under Saddle was Peyton Staat with Electric Sensation. The Reserve Champion was Avery Mortman with One Graceful Krymsun. Third was Delaney Good with Kewl Zippin Strider. Fourth was Taylor Phalen with Nobody But Me. Fifth was Ady Kallay and Ima White Sensation. 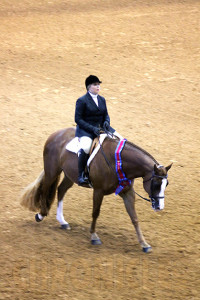 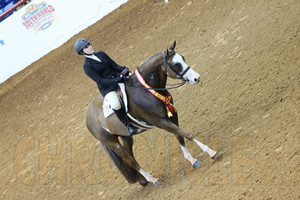 Winning the Solid Paint-Bred Hunter Under Saddle was Sarah Beth Felker with Just As I Expected. Reserve was Mackenzie Chapman with Hilfiger Again. Third was Zanna Sullivan with JZA Wyatt I Zipt.