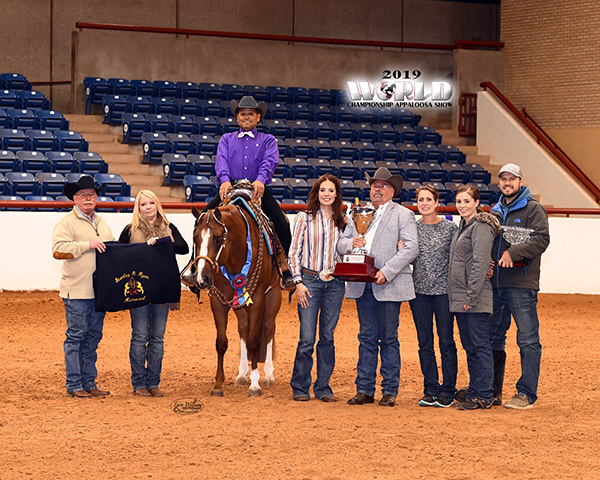 When Arturo Maestas loped up to accept his award in the Color World Series 3-year-old Western Pleasure Futurity at the Appaloosa World Show this year, he was in for a surprise. He had no idea that there was a special presentation planned in honor of one of his late friends- Stanley Ryan.

“I knew Stanley very well, actually,” Arturo says. “He was one of the first people that I met when I started showing Appaloosas. He was super nice and always ready to lend a hand with any advice I needed. I always enjoyed his company.”

“When he left to show more in AQHA, I kind of lost track of him a bit. I knew that he had gotten sick towards the end, but I didn’t know that he had passed. It was emotional for me in the arena, because I had no idea they were presenting a special trophy in his honor. I loped up to get my regular trophy, and they told me to stay there, because they weren’t done yet. His daughter, Chelsea, was there, and it made me a little emotional.”

Arturo and I’m Vicki Vale, a mare he owns with partner, Megan Holtmeyer, were the recipients of the Stanley Ryan Memorial Cup, a traveling trophy that will stay with Arturo until the World Show next year. Arturo feels very honored that his name is the first to be placed on the trophy, and he hopes it won’t be the last time. “I hope to go for it again next year. I have a really nice two-year-old that I won the 2-Year-Old Western Pleasure class and futurity with this year named The Caped Crusader. I hope he’s good enough to win next year.”

Arturo’s partner for this inaugural class was I’m Vicki Vale, aka “Mel,” a mare by Batt Mann and out of Pedal Pusher that he purchased as a yearling. “Her mother is a really nice mare that won the 2-Year-Old, Junior, and a bunch of Western Pleasure classes. I bought Mel for myself and showed her as a two-year-old and was Reserve in the class and won the Futurity at the World Show. Then, we were Reserve in the Color Non Pro and Open Western Pleasure at the NSBA World that year. We went back to the Nationals as a three-year-old and won there, and now we’ve won at the World Show.”

“She’s won quite a bit, and she’s always been a special mare for us. We bought her with the intention of keeping her to breed later on. She’s been my once-in-a-lifetime horse.”

This win is also special for Arturo, because he’s sharing in the accomplishment with co-owner and friend, Megan. “She has been with me since 2011. She and I do all the breeding together. We’ve bred and raised most of the babies that we show as two-year-olds. She’s a big part of this mare’s win as well.”

When Arturo first saw a video of Mel loping around the pasture as a yearling, he liked her breeding and thought she had potential, but he had no idea that she would turn into the horse she has become. “From day one, she has been super smart and really easy to train. She learned her job by the end of April of her two-year-old year, and she was ready to show. Next year, we hope to show in Western Riding and Trail. She’s a little feisty, but I just call her ‘my little redhead.’ Overall, she’s a wonderful animal.”

Arturo has since purchased Mel’s mother, and she’s currently in foal to VS Code Red, so Mel will have a half sibling very soon.