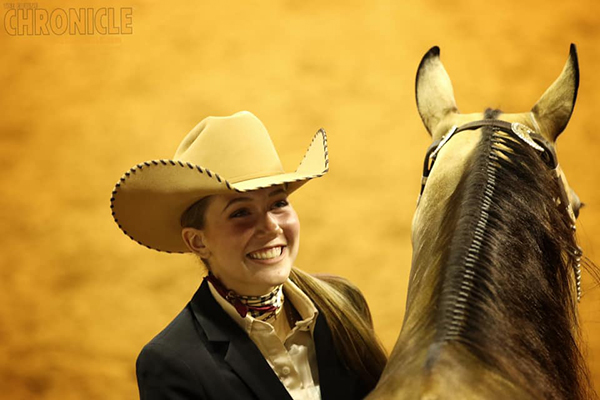 Two World Champions have already been crowned this morning at the 2020 AQHA Youth World Show. First, Giorgia Medows surprised herself by leading Surprizentheprincess to win Performance Halter Mares. The Reserve Champion was Natalie Vargo with She Had Me At Hello. Third and Level 2 Champion was Justin Eddy with Busy Be N Fancy. Fourth was Alexis Rutledge with Dreamin With Me. The Level 2 Reserve Champion was Kaitlin Smith with Always Decked Out.

Giorgia’s brother, Jack, showed “Princess” as a NRHA Derby horse when she was younger and to a World Championship title in Performance Mares back in 2016. Now that she is 11, Giorgia has taken over the reins and was named the Ranch Riding World Champion last year. Later in the show, she will return to compete in Ranch Riding, and she also has another mount, Princess’s first colt- Nite N Shining Armor. She will show Wimpys Show Stopper in Horsemanship and Extra Voodoo Gun in Reining, so this young lady is just getting started. 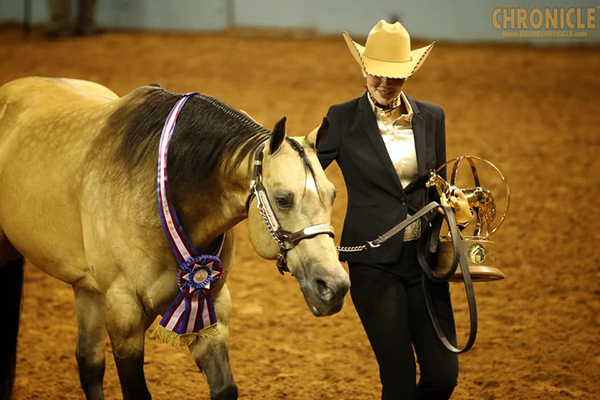 “Princess lives up to her name,” she says. “She has her bad days, but every time you get her out of the stall she’s ready to go do her job. When my mom gets to pick a horse to ride, she always picks her. She’s very easy to steer around. She’s like a dog, so perfect and sweet to be around.”

“Today, I was trying to get her shown to the best of my ability. I’m not a pro at showing Halter, by any means, but I had such great help from Luke Castle and his daughter, Coralee. Also, my dad showed in Halter and knew information to help me from back in the day.”

Now that Giorgia is 18, she will head to Texas in the fall to compete on the TCU Equestrian Team. 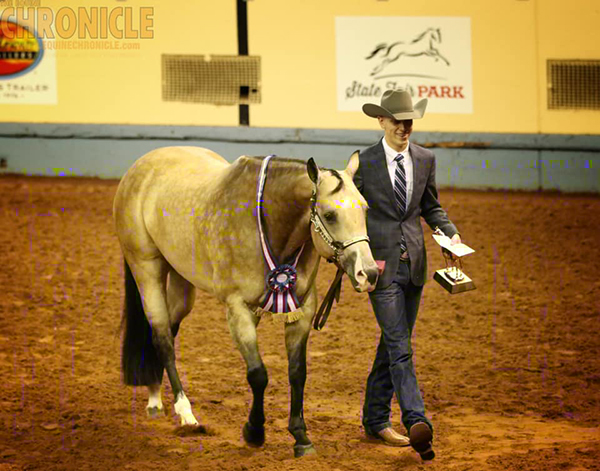 In the next class, Level 1 Performance Halter Mares, it was Justin’s turn in the winner’s circle. The Reserve Champion was Kaitlin Smith with Amazing Dream. Third was Isabella Buckley with Krymsun Belle.

Justin and 8-year-old “Busy” have been a team for the past three years. They typically compete in Reining and Ranch Riding, so Halter is something they’ve taken on recently.

“For a Reiner, she’s a very big framed mare that’s very balanced, has a lot of muscle, and a has a feminine head,” so we thought we would try to show her in Halter.”

It turned out to be a good decision, because they won the Level 1, Level 2, and were third in the Level 3. “It’s my first trophy at the Youth World, so it’s very exciting. As I was standing there, I just kept thinking to myself and wondering if I remembered to click the Level 2 box on my entries! I was just not believing that it was happening.”

Justin and his parents do most of the prep work with Busy on their own, but they do obtain occasional guidance from good friend, Jim Dudley.

Stay tuned for Showmanship, Equitation, and Hunter Under Saddle classes taking place later in the day.