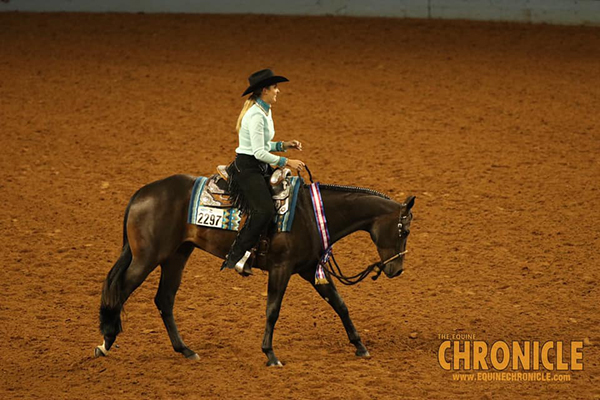 A number of champions have been crowned today at the 2020 AQHA World Show. Lauren Louw was the winner of 2-Year-Old Western Pleasure L2 with My Dad Is The Best. Reserve was Brian Ale with Straight Up Lazy. Third was Robert Fowler with KM You Make It Easy. Fourth was Cody Conover with Florencenthemachine. Fifth was Blair Townsend with Made To Ride. 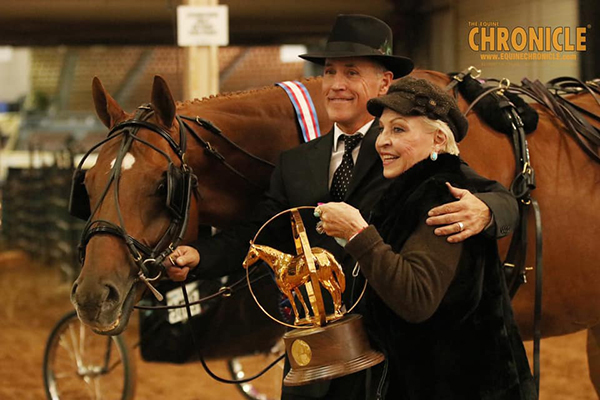 Kevin Dukes piloted Orange Is The Newbay to win Senior Pleasure Driving for Loretta Magnuson. Loretta was thrilled that after many years in the horse industry she finally has a World Champion! “I’ve been in the business for 40 years, and I’ve never had a World Champion. Then, I own him for one year and get one! I had The Rock, and he was a World Champion, but that was before I bought him,” she says.

Loretta purchased “Juice” sight unseen off a recommendation from Kevin Dukes. “Kevin and I had dinner one night at the Congress last year, and he asked why I didn’t have a Pleasure Driving horse. I knew what kind of horse I wanted. The horse would have to be dead sound and solid. He saw Juice at the Congress and the World last year. He called me and said he thought he found me a horse. I told him to buy it. I took Dukes at his word, because I like beautiful things. He knew I would really appreciate a beautiful horse.”

But, besides his good looks, Loretta also loves Juice’s sweet disposition. “He’s a very loving horse. When you love something, it comes back to you. When I go into his stall, he wants you to scratch and kiss him. I live in Minnesota and he’s in Texas, so it’s a long distance relationship.” 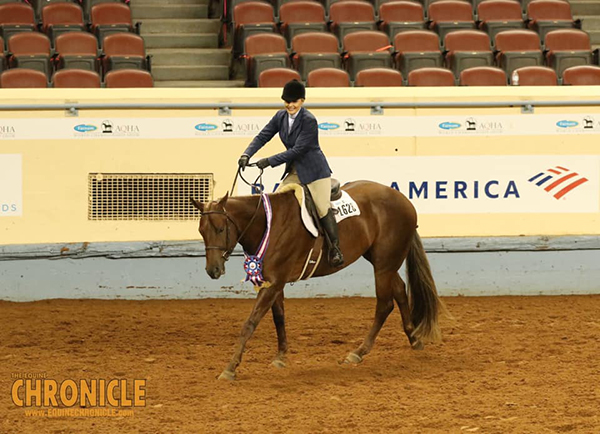 Angela Fox was the winner of Amateur Hunter Under Saddle with I’m Simply Southern. Reserve was Sarah Nimigan with How’s That For Ya. Third was Olivia Tordoff with Too Blazin Cool. Fourth was Alessandra Ehrle with Talk Southern To Me. Fifth was Haley Hartman with Al Fool Ya.

Angela has had great success winning this year at the Sun Circuit, NSBA World, and Arizona Fall Championship with her three-year-old gelding, “Grover,” by Its A Southern Thing. However, today’s win was very special, because it was in a pen of numerous World and Congress Champions many years his senior.

“When they got down to sixth place, I looked around and realized that every horse left was was World Champion, so I couldn’t have been disappointed even with sixth. I knew it was possible, but I knew it doesn’t happen very often.”

“Probably my favorite thing about him is his canter. He is great with his neck, and it’s a pleasure to watch. He’s maybe a touch plain to look at in the warm up pen, but when he gets all dressed up, and has his flaxen mane and tail, and his way of going, I think he is really special.”

Coming up next, Deanna Searles will pilot Grover in the Junior Hunter Under Saddle finals. 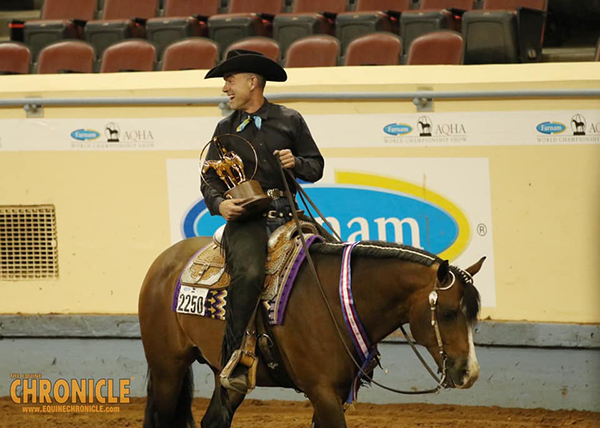 Chad Evans rode Florida Georgia Line to win Junior Trail. Reserve was Michael Hoyt with Doctor Phil Good. Third was Brad Ost with Made In Detroit. Fourth was Martin Doustou with Beez In The Trap.

This was 5-year-old “Maverick’s” last trip in the Junior pen, and Chad was feeling nostalgic. “When I was out there, I kept thinking, ‘This is it Mav, our last Junior ride.’ I kept wanting to slow it down because I didn’t want it to end.”

Maverick learned the foundational skills of Western Pleasure under the tutelage of Rusty and Katie Green when he was a futurity horse, and Chad has had him in his program ever since. “He’s so fun to do lope-overs on. He love the ground and sticks in it and really pushes off. Especially for a stud, he really cares about the poles. I think that foundation of Western Pleasure, where they learn about body control, really helps. He won the Level 1 Western Pleasure here when he was a three-year-old.” 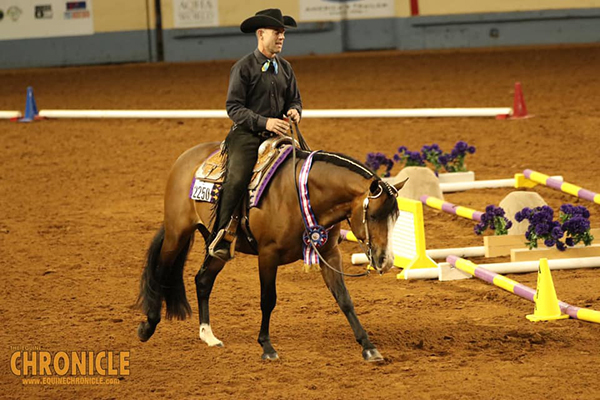 Today’s pattern was extremely difficult, in true Tim Kimura fashion, and tripped up quite a few horses. But Chad and Maverick were able to sail through the more challenging sections with ease. “We took it piece by piece. I focused a lot on doing each obstacle in duration. I would work one obstacle and then put him away and then work on another obstacle. I wanted to mentally get him to the place where he was thinking about it obstacle by obstacle. Then, my job on show day is to put it all together.”