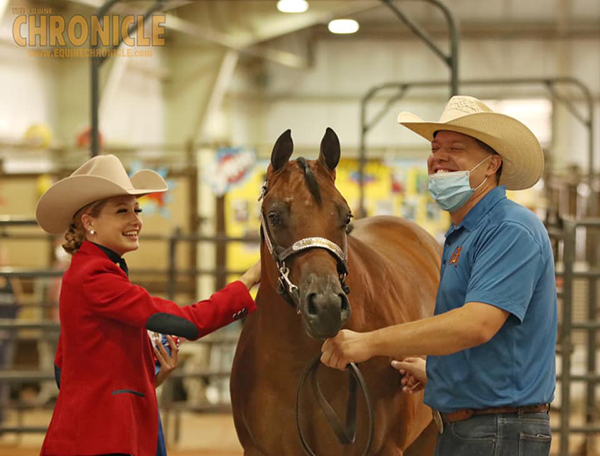 Today’s classes in the Jim Norick Arena were devoted to the discipline of Halter. Starting out the day, Audrey Niebrugge led Sheza Cool Sekret to win Yearling Mares. The Reserve Champion was McKenna Gibson with Rose A All Day. Third was Colton Smith with Premos Pretty Secret. Fourth was Erin Wright with TNR Lil More Grace. Fifth was Macy Blackwell with LillyAnte. The L1 Yearling Mares winner was Vivian Lewis with Vicktorias Secret. Reserve was Elizabeth Kooistra with Cauzin Heartbreak.

Audrey just got her new horse in March and this was their first time in the show pen together. “She didn’t really like the announcer and the lights, but she liked to watch herself on the big television screen!” Audrey says. “This was the first time I’ve shown her so my trainer [Chris Arentsen] told me to walk slowly and stay calm.”

Not only did Audrey win her first World Championship title, she was also the Level 2 winner in the class. And just in time because at 18 years of age this is her final Youth World Show. Now that she has two golden trophies in hand, she off with her family for some much deserved pool time. 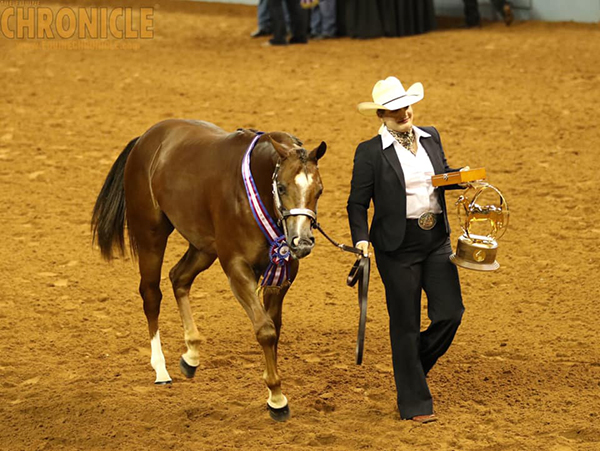 Coralee describes “Bentley” as a bit of handful. “He’s young and kind of goofy, but we got it done,” she says. “I’ve never walked in the arena with him before today. My dad reminded me to breathe and do my job and if I did my job he would do his.”

“You can train them all you want, but they’re babies so when they get in there and see all the lights they can forget what they’re supposed to do. You have to be really calm, pet them, and make sure they’re relaxed.”

Three years ago, Coralee won this same class with a fancy, blue roan named Initially Cool. Later on in the day, Coralee would also win 3-Year-Old Geldings with Elio. Over the next few days, she will compete in her favorite class- Breakaway Roping- with two horses- Lighting Bar Fire and Deluxe Pride.

“I’ve been setting up horses for my dad and working in the barn since before I could walk, and I started showing at the youngest age they let me. My thing is really Roping, but Halter is the family business and I’ve learned a lot from my dad. He is amazing.” 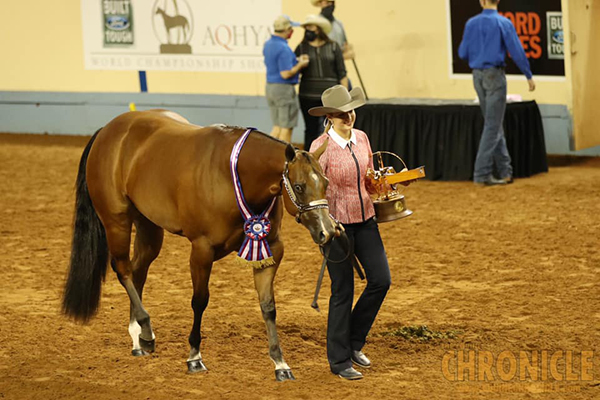 In 2-Year-Old Mares, the winner was Elizabeth West with Stellas Finest Rose. Reserve was Colton Stewart with HR Sheza Secret Kid. Third was Erin Wright with TNR Cali Cool. Fourth was Alexandria Lexi Tan with Valyria. Fifth was Jackson Boulware with TNR Bless It. The L2 winner and L1 winner was also Jackson Boulware with TNR Bless It. Reserve in both L2 and L1 was Alex Fischer with JF Power Play.

The World Champion in 2-Year-Old Geldings was Madison Renfro with TF Fearles Kid. She was also the L2 winner. Reserve was Grant Lewis with Fahrneit. Third was Trace Toteff with Mahoganee. Fourth was Clarie Carroll with So So Secretive. Fifth was Savannah Petrosky with Goldesign. The Level 1 winner was Shelby Byrd with Styled In Yella. 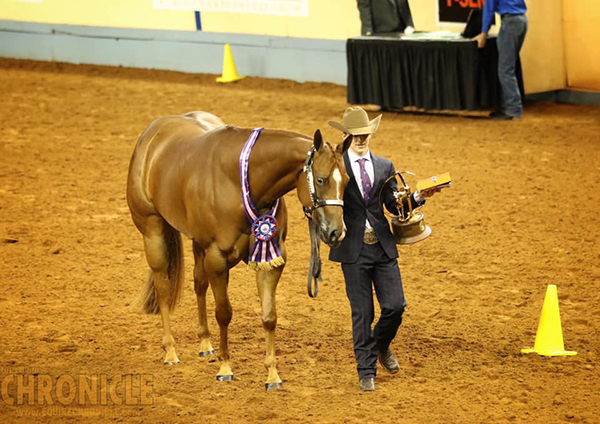 In 3-Year-Old Mares, Trent Searles led She’s That Radiant to a win. Reserve was Katherine West with Apleezing. Third was Trent Parker with Cinderella Style. Fourth was Victor Beauchamp with Secret Dibs. Fifth was Dylan Madden with Gurl Krush. Trent Parker was the Level 2 winner and Level 1 winner.

This was the third win in a row for Trent and “Kate.” They won Yearling Mares, 2-Year-Old Mares, and now capped off their three-peat with a 3-Year-Old Mares win.

“It never gets old,” he says. “There might be a little pressure getting her shown well, but there is not thought coming into the show that I need to win. With this mare, you can’t pick her apart. She has no flaws in her. She’s got a really pretty mare head and a big hind end. She’s perfect, really.”

Trent and Kate are prepared by the expert hands of Jeffrey Pait. “We’ve been with Jeffrey the whole time I’ve had Kate and both of us have really grown and matured. How she reacts to something she can be a little firecracker, because she feeds off other horses. I just have to tell her to whoa, and wait until she settles down. If something like that would’ve happened four years ago, I would’ve freaked out, but now I’m confident with her.” 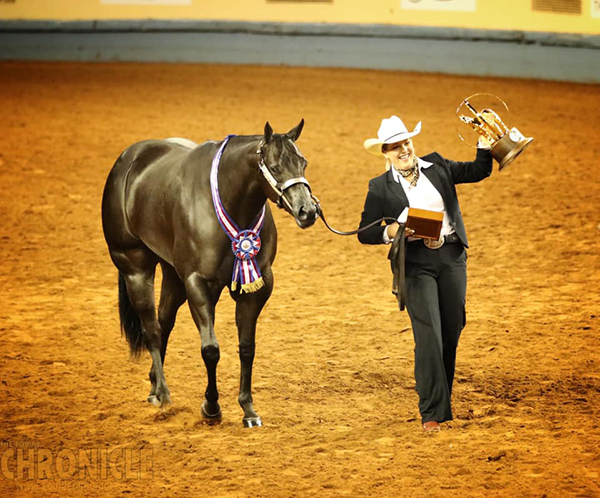 Earlier in the show, Trent was also named the Reserve Champion was Gunnarockya in Aged Geldings. Now that Trent is done competing at the show, he’s headed off to Auburn to start college. But, due to a lucky birthday, 18-year-old Trent still has one year left in the youth division.

“My parents were smart and had me in February, so I have that extra year! I want to go to school for Agricultural Business and focus on golf course management.”