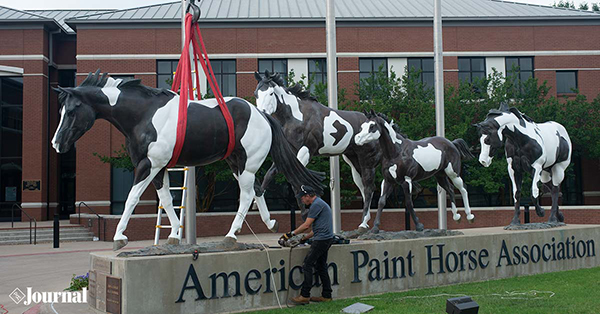 APHA’s iconic bronze Paint Horse statue—a landmark that has graced the front of the 57-year-old association’s international headquarters on Meacham Boulevard in Fort Worth for nearly 20 years—is heading out for refurbishment before being installed near the organization’s future home in the historic Fort Worth Stockyards  later this summer. This is the first phase of APHA’s move to the Stockyards, which is expected to take place in Fall 2019.

Bronze Conservation Services LLC in Dallas will spend two months refurbishing the bronze statues to make sure they’re looking their best for installation at the Stockyards location on Mule Alley.

The life-and-a-quarter-size horses, standing approximately 20-hands at the withers, have been an integral part of the association since they were created for APHA’s 40th Anniversary in 2002 by Gainesville, Texas, artist Marrita Black. A lifetime of horse experience helped the artist craft a sculpture so lifelike, it seems as if the herd might step off their platform and gallop away at any moment. 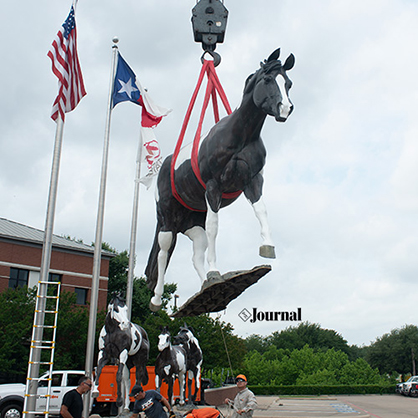 “When we heard about Stockyards Heritage’s redevelopment plans, we seized the opportunity to move our office,” APHA Executive Director Billy Smith said. “We are excited to be part of all that is taking place in the redevelopment of Fort Worth’s jewel and believe our new location will continue to foster new member interest when they walk by and see all that is happening here.”

Stockyards Heritage Development, a joint venture of Majestic Realty Co. and Hickman Companies, has begun the first phase of its $200 million development. Phase One plans include 175,000 square feet of shops, food and beverage, and creative office space that creates a distinctive cultural landmark reflective of other cities, such as the San Antonio River Walk.

APHA’s international headquarters is tentatively set to move to its new location in October 2019. Stay tuned for all the latest as the association continues its journey to its new home. 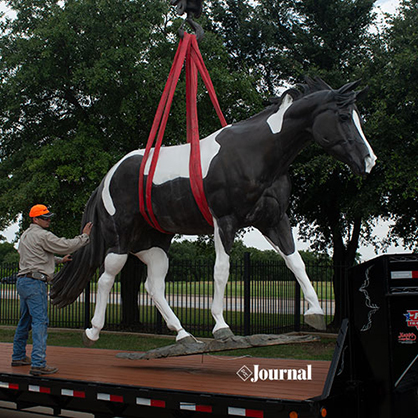 How can you be a part of this monumental move? Your gift to our Capital Campaign can honor a loved one while contributing to several great causes. Visit apha.com/foundation/capital-campaign/ to learn about all the ways you can get involved.