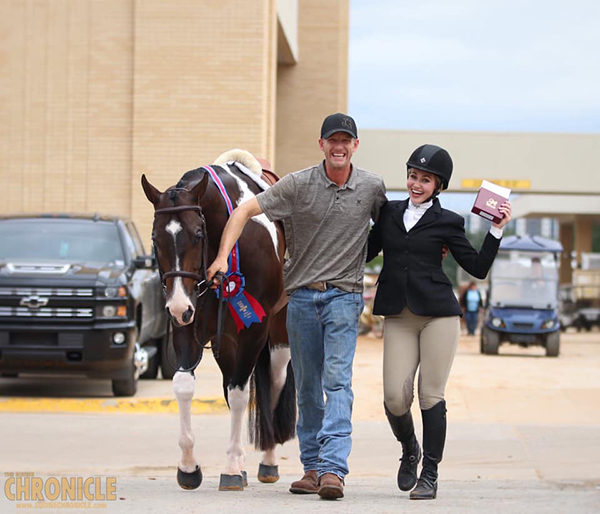 Don’t readjust your television sets. Yes, that’s Paige Wacker on a Paint Horse! One of our favorite, former AQHA youth competitors has since made the switch to the more colorful breed, and she rode a very flashy Paint indeed this afternoon to win Amateur Equitation in spectacular style.

Now 23 years old, Paige is competing with “Maverick,” a 6-year-old gelding she’s leasing from Alicia Michel. “I actually just got him 45 days ago,” Paige says. “Alicia bred and raised him, and I’ve known him since he was three. This year presented the opportunity for me to show him.”

Considering all of the titles Paige has won in pattern classes on the AQHA side of things, a win in Equitation is something new for her. “I’ve always been really close, but maybe had a bobble in the finals. Today, my mindset was to be clear. I ride Maverick almost every day at home with my trainer and boyfriend, Alex Gryskiewicz. That makes this a very emotional win.” 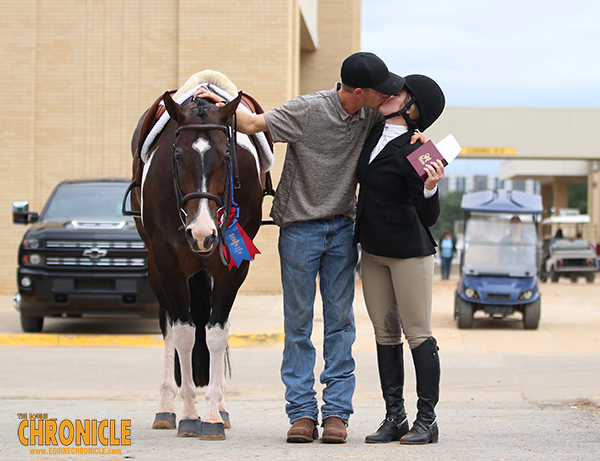 Surprisingly, one of the best parts of the pattern, in Paige’s eyes, was the flying lead change, a maneuver Maverick learned just a few weeks ago. “He was like butter in my hands today.”

Of course, we have to ask about that super fun show name- Whitetrashmillionaire. “I’ve never had a horse with a fun name before. We joke and ask if he’s going to be white trash or a millionaire, and today he was a millionaire!”

Coming up next, this team will compete in Amateur Showmanship and Novice Amateur Horsemanship.

Reserve was Lily Anderson with Only Good Intentions. Third was Christie Christensen with Suit N Tie Sensation. Fourth was Serena Rubin with Box Office Sensation. Fifth was Darcie Winiewicz with One Good Cowboy. 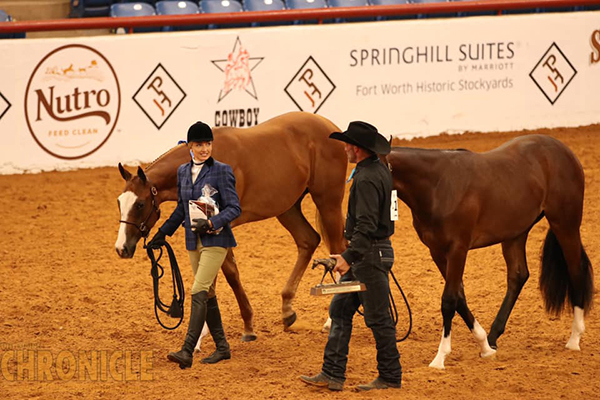 In Amateur Hunter Yearling Longe Line, Allie Littlefield led Blu Skies To Sleep By to a victory. Reserve was Nicole Dalton with TWF Candy Coated. Third was also Nicole with TWF Marilyn Monroan. Fourth was Laura Rogers with Factor In The Blues. Fifth was Branson Buckalew with Afabulousvalentine. 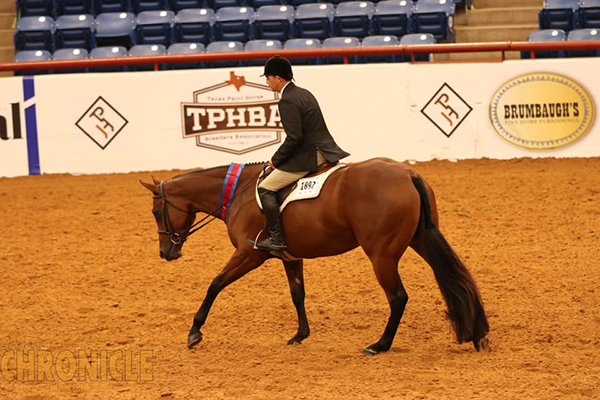 Ryan Painter rode On The Count Of Three to win Solid Paint Bred Hunter Under Saddle. Reserve was Madison Edwards with Ironed By The Best. Third was Jacqueline Moorefield with Etched In Cash. Fourth was Mackenzie Chapman with Hilfiger Again. Fifth was Maggie Molever with Ima Impulse Asset.

This was certainly not Collin’s first time in the winner’s circle, as he started out his career as an accomplished walk trot competitor. Now, he also has the decorated AQHA mare, Assets Miss Reba, on his show string. “Becky is funny and has a good personality,” he says. “Sometimes, we think she doesn’t know she’s a horse, because she acts like a person. She reminds me of my other horse, Reba.” 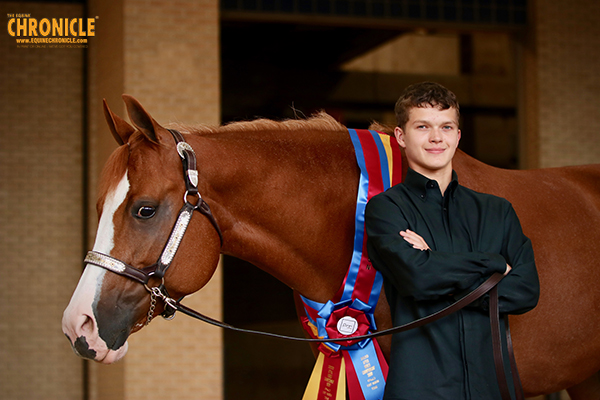 Collin’s favorite class is Showmanship and it certainly showed as he pulled out two exceptional performances. “The extended trot on the diagonal was kind of important, and it was new for me. I haven’t done that with her before. Then, I had to stop and shut her down and make sure her hip was next to the judges. Then, I had to do it again with the 90 degree turn and make sure I was in line with the judges for the trot. Those two parts were a little hard.”

Collin is definitely one of the only boys out there in this particular class, and although it might garner him a bit of attention in his suit amidst a sea of sparkles, he thinks that it’s a double edged sword. “I feel like with the judges it’s kind of like multiplication. If I do super good, then it stands out; but, if I do super bad, then it stands out too.”

In his Horsemanship pattern, Collin was very pleased with his square corners at the extended trot. Clearly an analytical kind of guy, he explains how one portion of the pattern altered his entire approach.

When it comes to his body position, his trainers, Brian Isbell and Jenell Pogue, gave him a few pointers. “They tell me to pull my shoulders back, keep my elbow at my sides, clench my hands, and sit on my butt.” 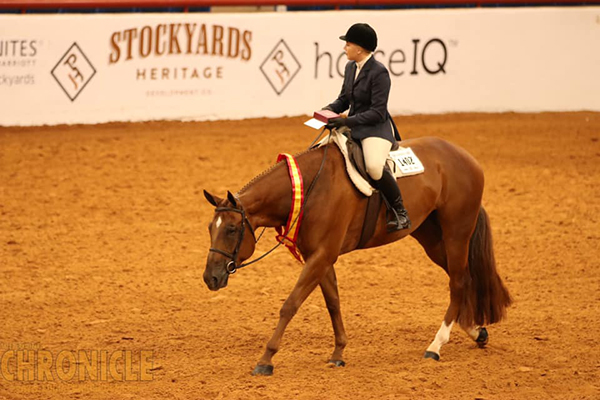