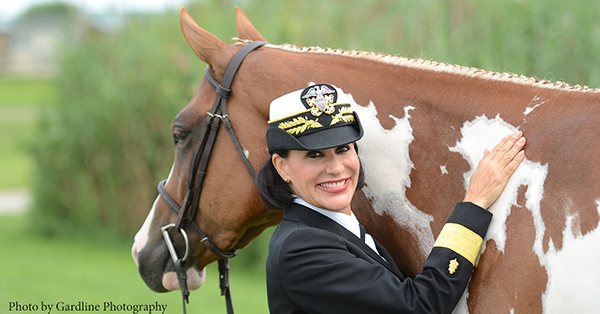 The National Cowgirl Museum & Hall of Fame recently announced their 2019 inductees, and APHA member Tina Shanahan of Raleigh, North Carolina, will be among five women to receive the prestigious award at the organization’s 44th annual induction ceremony on November 13 in Fort Worth, Texas.

Tina, a decorated 30-year veteran of the United States Navy, has enjoyed much success as an equestrienne, earning multiple APHA world championships and year-end awards. She will be honored for her career as a horsewoman as well as her extensive contributions to our country as a Navy Rear Admiral.

As the first naval inductee into the National Cowgirl Hall of Fame, Tina paves the way for generations to come. The North Carolina native was the first nurse to command Naval Reserve Expeditionary Medical Facility One, a unit whose mission is expeditionary medicine and directly contributes to saving American lives. Through her career, Tina has been awarded with military awards including the Legion of Merit and the Meritorious Service Medal.

“Our young servicemen and –women deserve the best from their leaders, so I probably work harder now than ever before because other people are depending on me, and I refuse to let them down,” Tina said shortly after her promotion to rear admiral (upper half) in February 2015.

Tina continues to breed and show her American Paint Horses as much as her busy work schedule allows.

Read about the other 2019 National Cowgirl Hall of Fame inductees here.