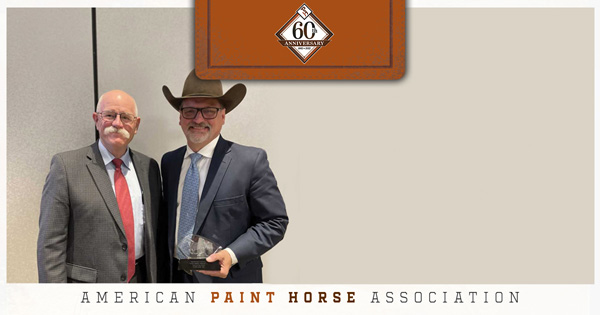 Dr. Billy Smith, Executive Director of the American Paint Horse Association, was honored with the American Horse Publications’ Equine Industry Vision Award at their annual conference May 13 in Lexington, Kentucky. The award, sponsored by Zoetis, celebrates ingenuity, originality and innovation that helps grow the horse community; Billy was nominated for the award by APHA staff.

Through his 10-year tenure with APHA, the world’s second-largest equine breed association, Billy has helped maximize customer experience, educational and financial leadership, and strategic vision as the association makes strides in its mission to promote, preserve and provide meaningful experiences with Paint Horses. He is regarded as a leader throughout the horse community, serving in roles with the American Horse Council and U.S. Livestock Genetics Export boards, and actively fosters camaraderie and outreach between APHA and other equine organizations.

Among Billy’s contributions to APHA are: 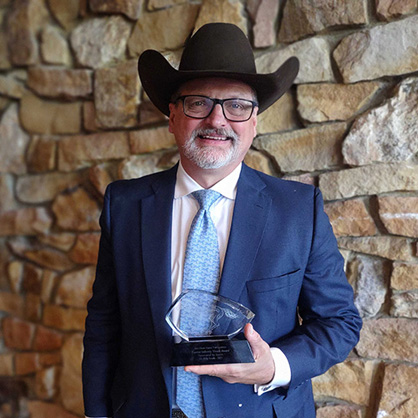 “Under Dr. Smith’s guidance, his staff and other APHA leaders are challenged to think creatively about our organization, not just for present-day solutions but for long-term impact to APHA and the greater horse market,” APHA staff wrote in the nomination letter. “By focusing on ways we can efficiently make the most impact, we’ve helped Dr. Smith elevate APHA to a position of prominence, respect and success in the equine landscape and beyond.”

The Equine Industry Vision Award is presented annually by American Horse Publications and sponsored by Zoetis in recognition of outstanding leadership, creativity and meritorious contribution toward positive changes in the horse community. Past recipients include leaders like Barbra Schulte, Gary Carpenter, Patti Colbert, Sally Swift and Olympian David O’Connor and organizations like Breyer Horses, PATH and Equine Land Conservation Resource.