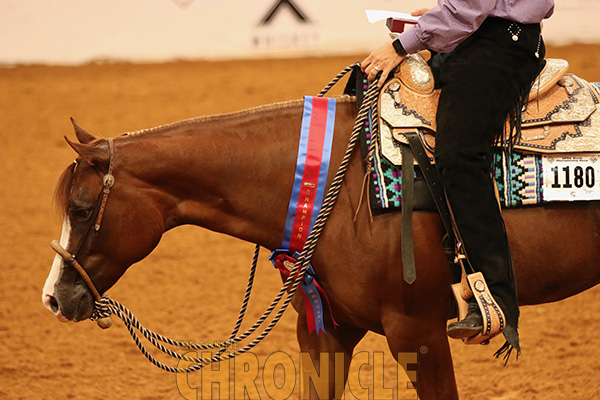 Earlier this year, a unique proposal came out of APHA’s Breed Integrity Committee that has since been deemed the “Restricted Registry Proposal.” It has been discussed widely in the industry, presented to the Board of Directors, and is now waiting to be under further exploration by a to-be-named Presidential Commission.

After a recent meeting in June, it was decided that a Presidential Commission will be composed of rank and file members from various APHA advisory committees and tasked with “determining the impact of the proposal on white pattern markings in the Paint Horse gene pool; if a third breed registry for the Paint Horse is appropriate, needed, and user-friendly; and if APHA has sufficient staffing to execute a new registry,” per an APHA press release.

So what is this new proposal all about? The drafter of the original proposal, Jana Simons, sat down with The Equine Chronicle to explain what she believes the proposal will do to help preserve the Paint Horse breed for generations to come. The original proposal has gone through some changes, and with the help of Breed Integrity Committee Chairman, Kevin Smith, it has been streamlined, is more inclusive, and easier to understand.

The goals of the proposal are to alleviate some of the risk inherent in breeding APHA horses for color; incentivize breeding Paint Horses; monetize underrepresented solid APHA horses, and expand the inventory of APHA horses in the registry.

The problem with breeding horses for color is that even when a breeder painstakingly selects the perfect genetic match, that seems to be a sure bet for quality and color, sometimes nature intervenes and you’re left with a solid-colored foal. There’s certainly nothing wrong with that. It’s likely to be just as athletic and talented as its colored counterpart. In fact, there’s an entire association dedicated to solid-colored animals- AQHA. However, within the world of Paint Horses, color is king, and because of current registry rules, a solid-colored foal will be relegated to the Solid Paint-Bred division, an arena that is plagued by a lack of participation, low numbers, classes that aren’t offered at all horse shows, and, as a result, solid horses with nominal value, Jana explains.

If this proposal were to be made into a rule, all Paint horses (colored and solid) would be given an opportunity to compete together. Horses with the qualifying markings, regardless of parentage, would receive Regular Registry papers, like normal. Solid horses would be granted what’s being called “Restricted Registry” papers, so long as the solid horse’s pedigree contains an APHA horse in two or more generations of ancestry. Also, in the instance that the solid horse is bred in the future, it must be bred to an APHA Regular Registry stallion or mare. It’s that simple.

“The initial impetus for the proposal was to provide opportunities for single-registry solid horses, meaning, those horses that are not eligible to show at an AQHA show and can only compete in Solid Paint-Bred classes at APHA shows,” Jana says. “The breeder whose resulting solid foal is eligible to only show in Solid Paint-Bred classes is taking a hit. It’s a risk most breeders cannot afford to take anymore. This is the breeder that needs relief.”

Through much deliberation, the proposal was broadened to also include those solid horses that have APHA ancestors in two or more generations of their pedigree. “What’s being said is that solid horses, that are the result of multiple generations of crop-out Quarter Horses, are clearly carry color-producing genes that should be preserved by the APHA,” Jana says. ” The resulting horse is one we need to maintain in our gene pool to produce color in the future, even if it doesn’t possess color itself.”

Jana and others on the Committee believe this proposal will provide an avenue for well into five figures of solid horses; that’s opening the doors to tens of thousands of solid APHA horses, a breed whose numbers are declining. “Some of these solid horses are currently registered as Solid Paint-Bred horses and will upgrade to Restricted Registry, but many were never registered with the APHA at all,” Jana says. “Also, and more importantly, this proposal continues to support the Paint breeder by requiring those animals to breed back to a Regular Registry Paint stallion or mare. It’s a win-win situation for everyone,” Jana says.

Allowing solid horses to show alongside their colored peers is certainly not a new discussion. It’s something that has been contemplated for years. However, with the current state of the industry, the Committee believes that the time is now to make such a move so future generations have a Paint Horse industry to enjoy. Hence, the reason for asking the Board of Directors for Emergency Action on the proposal, instead of waiting until the 2021 Convention.

“The reason for requesting emergency action from the BOD is simply that we are running out of time,” Jana says. “If we wait until the Convention in 2021 before it is passed, then it will be 2022 before people can make any breeding decisions based upon the proposal. I’m not sure that we have another two years to wait for action that really breathes life into our association. If this proposal were to be passed now, we would immediately see an injection of capital for everyone. What’s important to remember is that this proposal helps Paint Horse trainers, owners, breeders, regional clubs, and our association. The proposal helps all of those people and helps to protect the integrity of our breed. Also, it’s important to note that for the breeder who breeds double-registered horses, this takes nothing away from them; the current rules, as they apply to crop-outs, would remain unchanged. It only adds a segment of new horses.”

“As it stands now, a single-registry solid Paint Horse that (one that can’t get Quarter Horse papers) has few avenues. It has very little value. For a number of years, Solid Paint-Bred horses were worth something, but not anymore. I think the Paint breed is in a different place right now, and I don’t think we can afford to wait. The APHA’s annual registration numbers are evidence that Paint Horse breeders can’t continue to afford the heartbreak and financial loss that that comes with the risk of breeding single-registry horses. Basically, with this proposal, we’re trying to protect the Paint breeder, Paint trainer, Paint owner, and our association.”

Support for this proposal thus far has been overwhelming; but, of course, with any proposal, there will be some resistance. Recently, Jana received a call from a gentleman who expressed his concern about the lack of APHA stallions that he can select from to breed to, if and when the time comes that he wants to breed his Restricted Registry horse.

“One of the interesting comments that I received in opposition was from a gentleman who stated that his issue is that there aren’t enough Paint stallions to choose from. I believe he’s exactly right. That’s the very issue. If we would’ve done this years ago, people would’ve found some merit in owning a Paint stallion, and we might have 40 to choose from instead of 10.”

“Other concern has come from individuals who wonder if this proposal might exclude the ‘double-registered breeder.’ What I hope members to notice is that the proposal was drafted to protect APHA breeders who take a risk. It has always been my opinion that breeding for double-registered horses is actually breeding for Quarter Horses with the added bonus of getting a Paint, if the resulting foal happens to qualify. It’s important to know that this proposal has zero negative impact on the double-registered horse, breeder, or trainer. The APHA welcomes double-registered crop-outs into the breed. It’s the foundation of APHA; but, my goal with this proposal was to promote color for future generations and, while I don’t dismiss the significance of allowing solid horses to show with Regular Registry horses, it’s important to remember that we need to protect APHA horses, breeders, trainers, and owners.”

Jana also notes that the proposal has been discussed and evaluated with regard to the topics proposed for consideration by the forthcoming Presidential Commission. “We can tell you the impact on the breed and the cost to the APHA; those matters have already been extensively vetted. Hopefully others can appreciate that time is of the essence.”

We will continue to follow this unique proposal to see what developments come in the future after it has been assessed by the Presidential Commission.

If you have an interesting topic in the horse industry that The Equine Chronicle should cover, email B.Bevis@EquineChronicle.com.