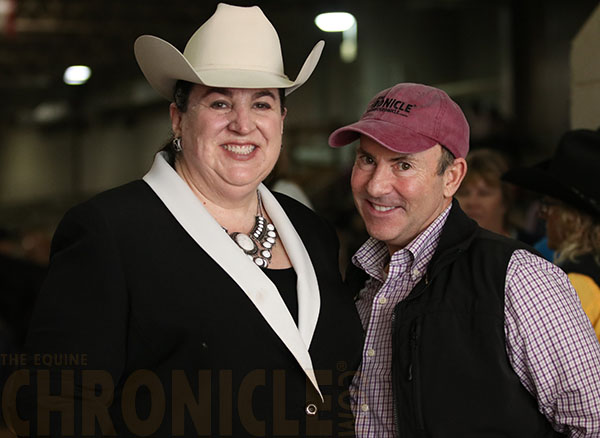 Kimberly says her beloved, “E,” is by Mr. E and out of a Playgirls Conclusion mare. “We purchased him from Lea Ann Koch and Bob Lee early in the year. He’s an N/N colt, and we’re thrilled to have him. He’s a correct colt with tremendous eye appeal. He’s bay with white markings, and it doesn’t get much more fancy than that.”

Kimberly says she wasn’t initially going to bring E to the Congress this year, after winning at the Breeders’ Championship Futurity, but she’s glad she made the decision. Now, he will have the rest of the year off. “We’re going to be patient and wait on him.” 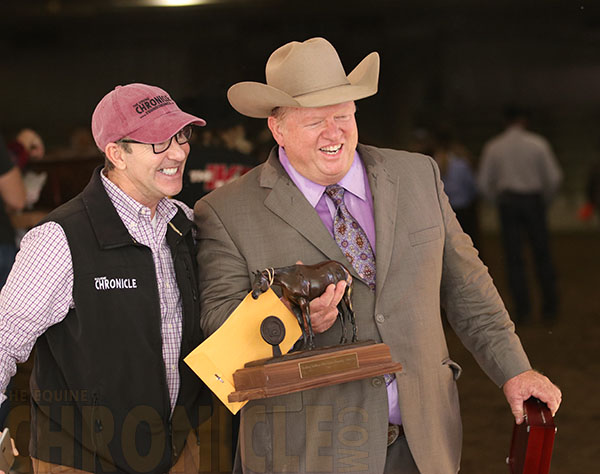 This team currently competes under the guidance of Tom Robertson. The winner of the Amateur Weanling Stallions Non Pro Elite Halter Futurity was Wilburn Archer with his Appaloosa, All In All Done.

Dan Fox was at the lead of Romerio to win Amateur Yearling Stallions. This beautiful colt is by PF Premo and was picked out by Fox’s trainer, Andy Staton. “He said not to let this one go by, so I listened to my trainer! He’s so balanced, has a cute little head, and cute neck on him. Come his two-year-old year, he’s going to be tough.”

Coming up next, Romerio will be shown at the AQHA World Show in both the amateur and open divisions.

The Reserve Champion in the class was Tammi Smith with Whoisit. Third was Lynn Flowers with Escort. Fourth was Joy Stehney with Exxpectation. Fifth was Shelly Peden Hendryx with Very Cool Indeed.

Bob Eurez was named the Congress Champion with Best Kept Secrete in Amateur 2-Year-Old Stallions. Last week, Ross Roark led the stallion, by Heza Secret Agent and out of Hush Don’t Tell, to be named the Open Grand Champion Stallion. However, Bob didn’t feel any pressure coming into today’s class. “I like the competition!” he says.

“There is no doubt he is one of the best, as far as conformation. Look at the head on him! That’s a key factor. He’s real correct, and, for a stud horse, he’s really easy to handle.”

Bob informed us that this stallion hasn’t been shown at all this year. The last time he was shown was at the 2016 AQHA World Show, when he took home two World Champion titles. “I don’t practice with him much. I took him out for about 20 minutes the other day. He hasn’t been shown this year, because this is the one that counts!”

The Reserve Champion was James Henrekin with Obviously Preplanned. Third was Mariah Gipson with Kewel. Fourth was Jake Wicker with FG Fella In Yella. 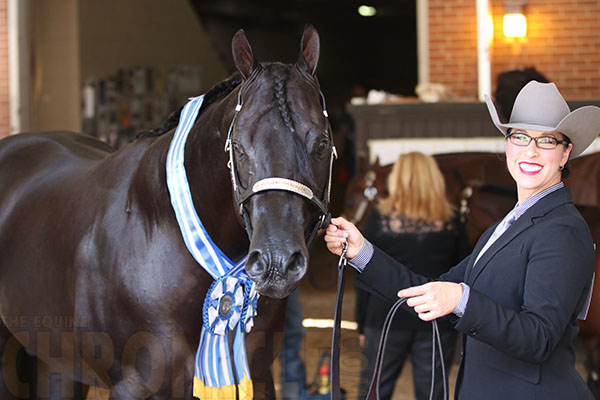 In the 3-Year-Old Amateur Stallions class, Holly Saigo won her first Congress title with Epic. “I live in Ohio, so I’ve been shopping here for many years, and then I came to my first Congress to show in 2012.”

The beautiful, black stallion named Epic is by Top Secret and out of RPL My Te Touching. He’s fit by Matt Woodson and Andy Staton, who led him to a Reserve finish in the open division. “I told them, that if I won, they’d have to bring a shovel in and bury me in the arena, because I’m not leaving!” Up next, this team will be headed to the AQHA World Show.

Pamela Holbrook was named the Champion in Amateur Aged Stallions with Hy Fa Lootin. The Reserve Champion was Ryan West with My Good Intention. Third was Jeanne Cascagnette with TF Cool Cruiser. Fourth was Victoria Doyle with Advanced Conclusion. 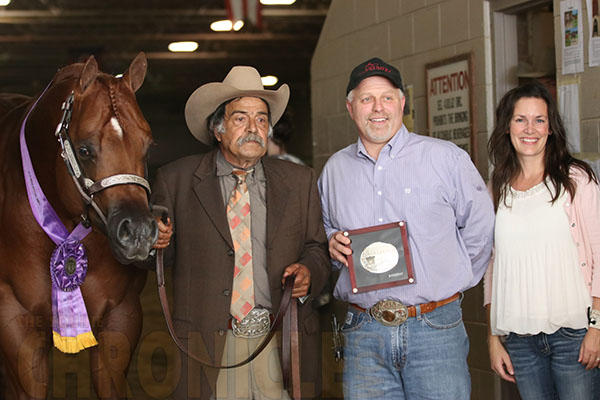 Breda Dean-Kennedy led Inspirado to win Amateur Performance Halter Stallions. The Reserve Champion was Ted Filandrianos with I Am The Party. Third was Melinda Maxson with Sure Slidin Smart.