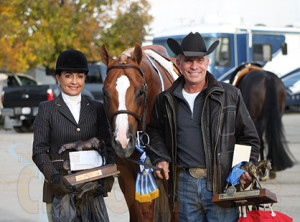 Industry veteran, Allison Clark, was in the irons of a very popular stallion here at the All American Quarter Horse Congress. Clark rode 4-year-old stallion Mechanic for owner Sandra Morgan, and the pair was rewarded with a win in Green Hunter Under Saddle.

“You can’t even walk from the barn to the practice pen without [someone asking for] a picture,” Clark says. “If he could sign autographs it would be very handy.”

What makes this particular horse such a crowd-pleaser? Stephen Stephens of Dry River Ranch believes his large following is due to many factors.

“He has such a following, and he’s only a four-year-old horse,” he says. “He’s got a different look than the rest. When he comes into the pen, he just stand out differently, and he always has.”

“I think the strength of his hind leg is just tremendous. Even when we went to buy him, we wanted something that was diversified, that we could do both [events] with for the all-around market. I think it’s because of his strength, his height, his beauty, his movement, and that softness.”

Clark agrees with Stephens assessment and praises the horse’s ability to quickly and easily transition from Western to English events.

“I loved his ride,” she says. “He stood up and went around with his ears up. It’s pretty neat because you can jog around in the makeup pen and then go out and trot in the show pen.” 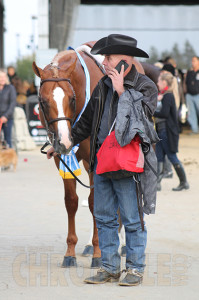 Earlier in the show, Mechanic was led by Tim Finkenbinder to a fourth place finish in Open Performance Halter Stallions. Although Mechanic is entered in a Western Pleasure class here at the Congress as well, Stephens will have to speak to his owner about whether to go ahead as planned or quit on a high note.

“He’s already a Reserve Congress Champion in Western Pleasure,” he says. “In today’s market, I can’t [think of another stallion like that]. That’s the beauty of him. We wanted that diversity so we could breed English and Western horses. The only other sire I’ve seen it with is [the late] Good I Will Be.”

Mechanic’s first foal crop will hit the ground in 2015 and it will be a large one. This year, the stallion has bred 103 mares in his first season, a feat Stephens describes as tremendous.

4-Its A Southern Thing/Jerry Erickson