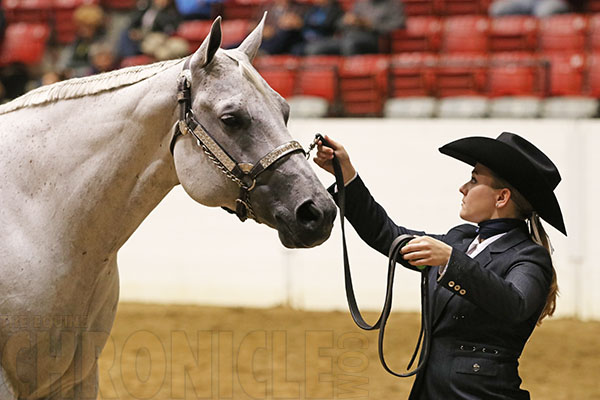 After a very long, two-hour, Youth Performance Halter Geldings class, we have a Congress Champion, and a unanimous Congress Champion at that! Allie Tamulewicz led her 8-year-old, gray gelding, Summer Hotrod to win in spectacular style.

“That was really huge!” she exclaims. “He always does really well and always shows really great for me, so I thought we would do well. But I had no idea that would happen. We were actually unanimous here in 2015, so to do it again is amazing.”

“Hotrod” is an active all-around horse competing in “everything except Jumping and Reining,” Allie says. “We show in Equitation, Hunter Under Saddle, Showmanship, and Horsemanship. I don’t get to do any of that here, because I have to go back to college, which is really sad. I go to school at Northeastern University in Boston, which is great, but I’m so sad that I can only take this weekend off of class.” However, before Allie leaves town, she will show her other horse, Miss Famous Maker, aka “Blueberry,” in NYATT Western Pleasure.

Assisting Allie and Hotrod for today’s class was their Halter horse trainer, Gene Parker, who keeps Hotrod during the show season. “When we first bought Hotrod, we had him with Jennifer McGrath. She’s who I work with for all-around classes. Since she moved to Texas, he stays with Gene, because he has always done our breeding for our mares.” 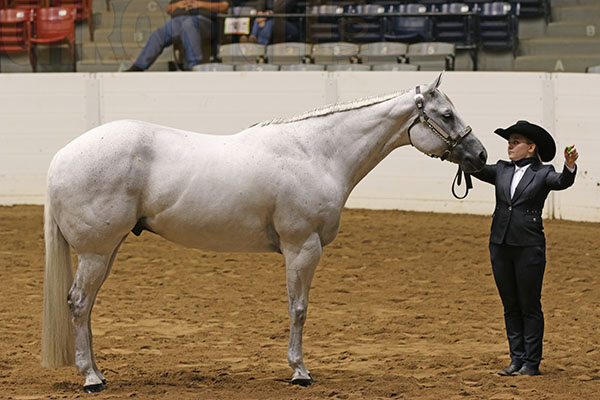 “Gene has helped me in every way with showing in Halter. He’s taught me where Hotrod’s feet should really be. I’ve shown Halter a lot before, but I’ve never really gotten that into it. Now, I know exactly how he’s supposed to stand, how to present him, and where he looks the best. He’s helped me learn Hotrod’s buttons.”

The gray gelding by Radical Rodder and out of Autumn Invitation is large for his size, but it’s his correct conformation that suits form to function that Allie believes gives him an edge over the competition. “I think he’s huge, first of all, but he’s also put together so perfectly. I love his hip. I think he has the prettiest hip I’ve ever seen, so I always tell him he’s got a booty! He’s awesome, and I think he’s put together great. Also, he’s so straight and correct, which carries over into the other events we show in.” 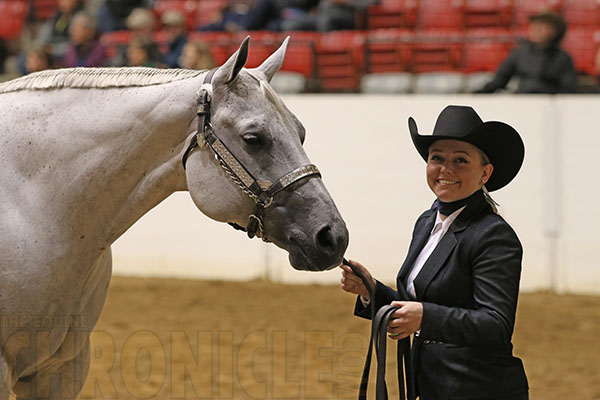 The Reserve Champion in the class was Jordan Czerwinski with Simply One Hot. Third was Madison Holmes with Sleepin Ina Ezchair. Fourth was Trent Women with Too Sleepy To Flash. Fifth was Lauren Lounsbury with Chocolate Night Out.