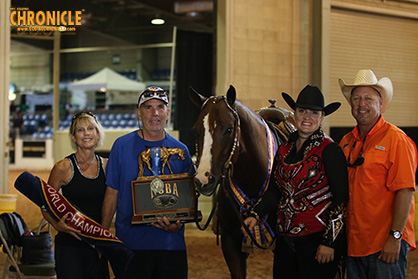 Katy Jo Zuidema rode Knockin It Out to win the Green Western Pleasure for Dan and Kathy Frederick. This mare has had quite the year coming into the horse show with $48,000 in earnings with top finishes at major events like the Novice Horse Western Pleasure at the SOQHA Madness and Kim Rich Memorial Western Pleasure. She’s been either first or second in every class she’s been shown in this year. 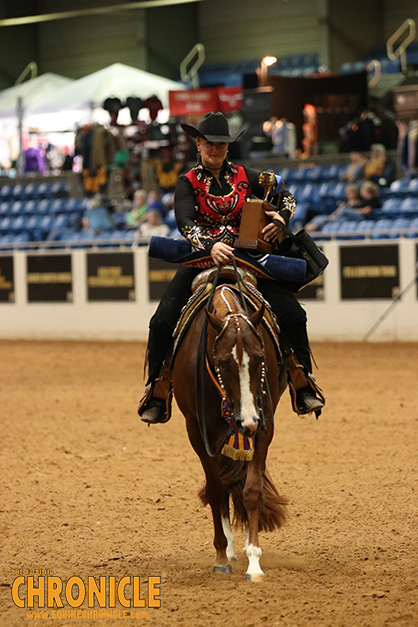 However, Katy Jo is the first to say that “Pippa” wasn’t necessarily the easiest horse in the beginning. “She’s the last one out of the Fredericks’ great mare, Zippin The Breeze. We started her as an early two-year-old, and we knew we needed to wait on her. To be honest, she was kind of a late bloomer. I didn’t fall in love with her until late summer.”

“She was actually entered in the Coughlin at the Congress as a two-year-old, and we had her brother in the Masters. But, our plan wasn’t to sell either of them, and we didn’t want two horses to show in the Open 3-year-old classes this year, so we saved her for the Green and Novice.” 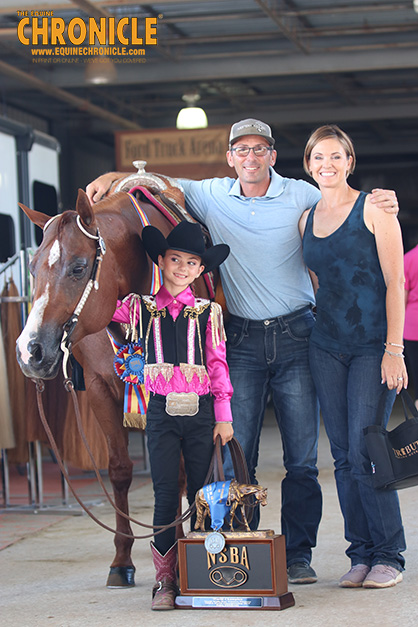 Miss Lily Jones rode A Good Cookie to win Walk Trot Western Pleasure and her first World Championship title. We asked 7-year-old Lily what her motivation was for today’s class. She said, “I really just wanted to win the hamster.” Knowing that NSBA isn’t giving away hamsters as awards this year, we decided to investigate further…

“My mom and I’s deal was that if I won a World Champion, I got a hamster, and we wouldn’t tell daddy until I won.”

Lily already has a few names picked out for her hamster, and she would like the assistance of Equine Chronicle readers to help her decide. The contenders are “Snowball,” “Mya,” or “Cookie.” She would like for the hamster to be a girl, and she’d like a mixed color, spotted hamster.

Anne Wilson was at the lead of Give Me The Goods to win their first NSBA World Championship title in Select Showmanship. “I’ve shown a lot of Showmanship classes in my lifetime, but I’ve really been struggling to come together with this guy. He’s just a big Hunt Seat horse, and I’m used to doing Showmanship with Western horses.” 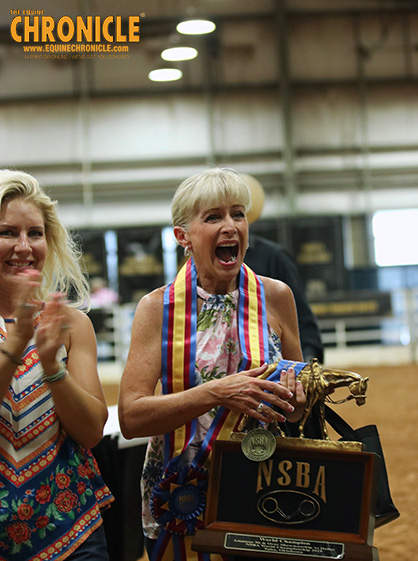 “We’ve been working a lot on his back. Some horses are just more physically talented at backing fast, and we’ve had to work with him on that. Today, the first two steps were sluggish, but then, like Jenny says, I lengthened my stride. He got out of my way, and I almost thought I backed too far!” 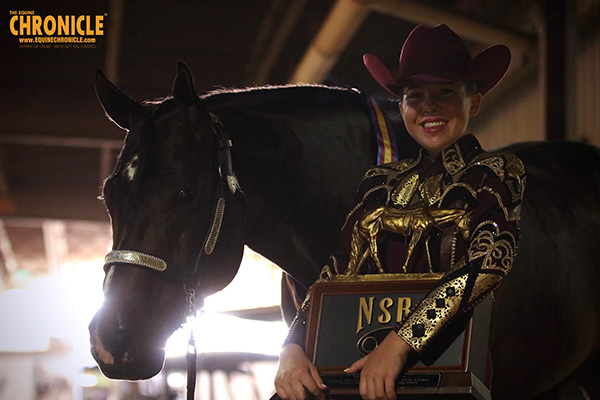 Sydney Sargent and Lazy Lopin Guy were named World Champions in 13 and under Showmanship. Sydney won this class last year with her other horse, Been Bar Hopping.

“He’s not a great backer, so I knew that would be a struggle, because it was a long way to back. That meant that I only had a few steps before I had to turn, but I think that’s how my pattern was a little different.”

Kathleen Lennon rode One N Only Krymsun to win their first World Championship title in a very tough, three-cut, Novice Amateur Western Pleasure. This is Kathleen’s first time showing in a class other than Hunter Under Saddle at the NSBA World. 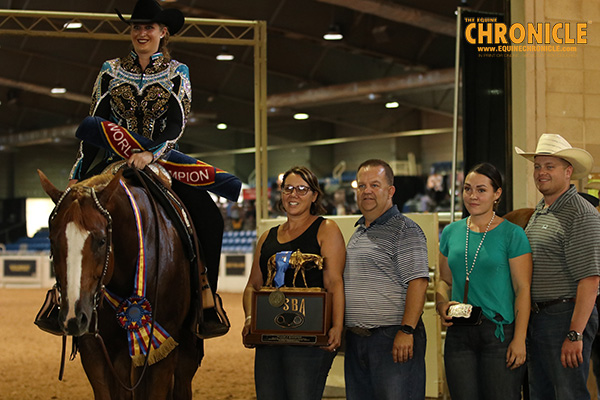 “I’m a vet, so I’m used to working on horses at the shows. I showed Hunter Under Saddle with Heidi Piper for years. Then, I had the opportunity to ride him, and he’s got such an awesome, relaxed feel, especially at the lope.”

“He’s the most perfect horse I’ve ever owned!” Talyn says. “Western Riding is one of our favorite classes. He feels really relaxed and calm, and every stride is easy for him. I’m calm, he’s calm, and I think he’s likes to show off his lead changes.” 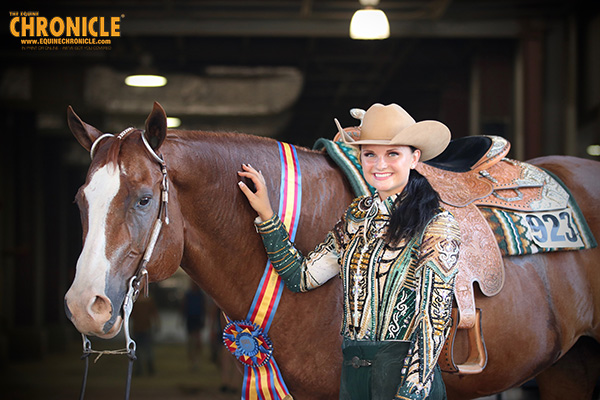 “I think I knew it was going well after the second line change. It felt like it was clicking with every change. He knows what he’s doing.”