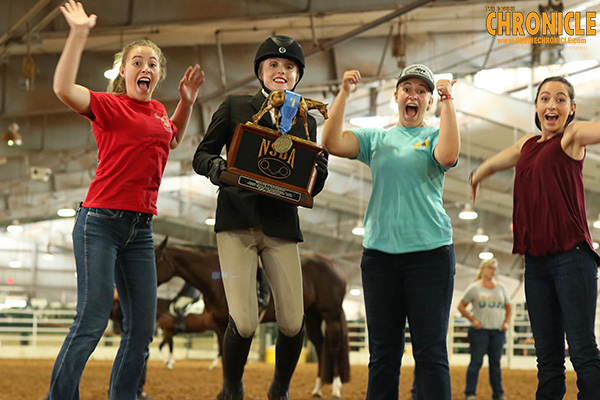 Jacqueline Potwora rode The Absolute Best to win 14-18 Equitation and her first World Championship title today at the NSBA World Show. “Bentley” is a new horse for Jacqueline, so coming into the AQHA Youth World and NSBA World Show, she didn’t have many expectations.

“This is a total surprise. I was super proud of him. We’ve definitely had some struggles, but I also can’t expect that much from a junior horse.”

Assisting Jacqueline with preparations for today’s class was her trainer, Shannon McCulloch. “Shannon is always telling me to keep an eye on my lower legs and my shoulders. Those are the big things for me. In this pattern, she also said that, when we switched diagonals, not to let him swing his hip out and to make sure that his head stayed engaged in the bridle. I really liked my second hand gallop and going to the two-point trot.” 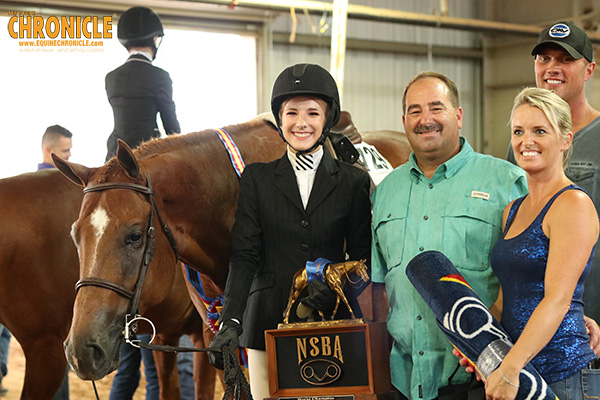 Alexa’s trainer, Dale Hamilton, couldn’t attend the show, so she relied on guidance from Chis Gray. “One thing we talked about is that, since I don’t usually do simple lead changes, and I like to rush them, I had to make sure that I trotted long enough before I picked up the canter again. My favorite parts were the hand gallop and two-point.” 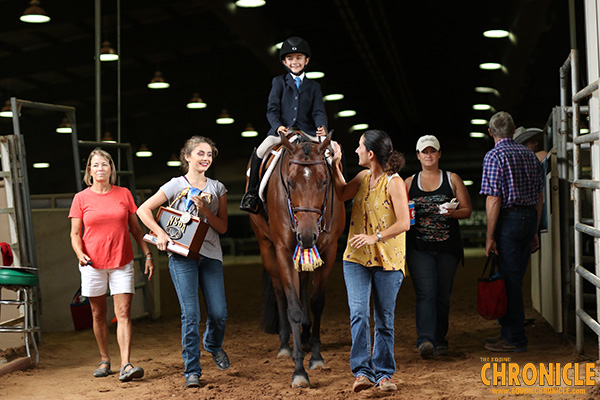 9-year-old Riley Potts rode Slam I Am to win Walk Trot Hunter Under Saddle and his first World Championship title. Contrary to popular belief, Riley informs us that this is his horse that he simply shares with his sister. Here at the show they were sixth in Equitation, Reserve in Trail, eighth in Western Pleasure, tenth in Horsemanship, and fourth in Showmanship. His favorite classes are Hunter Under Saddle and Western Pleasure.

Riley had been riding since he was five years old, so practically half of his life, but he just learned how to ride English at an NSBA Boot Camp. Up next, he will be competing in small fry events at the Congress. 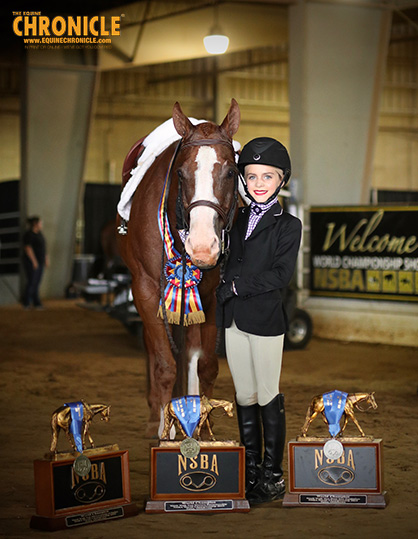 Another World Champion walk-trot competitor was Allie Rippeon with Famous N Foolish, aka “Calvin.” Allie and Calvin won Showmanship, Horsemanship, and Equitation at the NSBA World Show this year and this was their first time winning a World Championship title!

Allie’s favorite class is Equitation, because she believes both she and her horse are very good at it. Allie’s horse trainer is Shannon Vroegh, who Allie believes gives her lots of helpful advice. “She always tells me to put my heels down, stay poised, do the pattern, and do my job.”

Although Allie is not sure what to do with the NSBA rugs she received as awards, she’s very happy to be taking home her new belt buckles and trophies. However, they may be hard to fit on the plane… 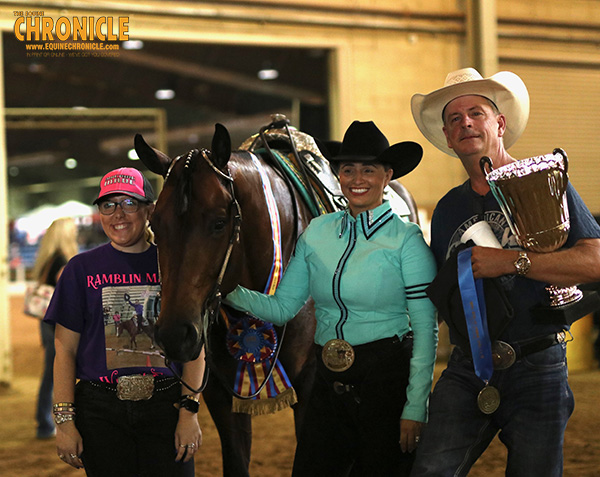 Katie Green rode Made N The Shade to win the BCF Intermediate 4-6-Year-Old Western Pleasure. Natasha Blanchard has owned “Mikey” since he was two years old. Since then, he’s been named the NSBA Horse of the Year, a World Champion, and Congress Champion.

“We didn’t know Mikey had all this try,” Natasha says. “When he turned three, I started showing him, and he’s been amazing ever since.” 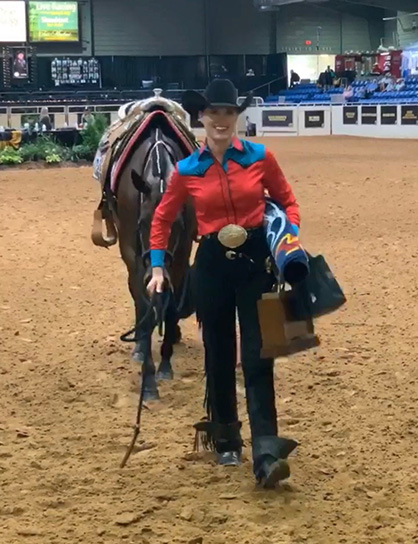 Hillary Roberts rode Line Up Behind to win 2-Year-Old Non Pro Western Pleasure. This gelding is by VS Flatline and out of She’s Immortal.

“The mare is one that we bought several years ago in a group from Sheri Kern, and we didn’t really know what she was going to produce. He’s pretty plain to look at, at first. But, then, Andy kept saying that he was going to be the sleeper this year.”

Hillary showed “Calvin” to place third at the Tom Powers Futurity and today was his second time in the show pen. “He’s got so much self-carriage that you don’t have to help him at all. He’s great through his head and neck, and he’s really strong. He kind of reminds me of For One Night Only, as a two-year-old.”

Candice Hall rode Made After Hours to win Intermediate Non Pro 2-Year-Old Western Pleasure. “Vivvie” is by Candice’s stallion, Machine Made, and out of Only Ever After. 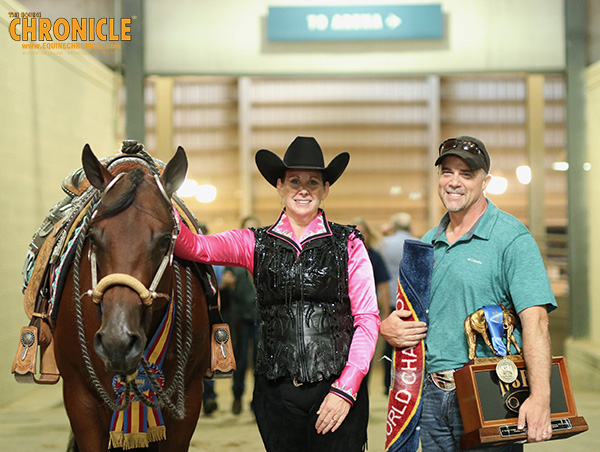 “We purchased her from Capital Quarter Horses for our 20th wedding anniversary, two years ago,” Candice says. “We bought two babies. Cory got Vivvie, and I got a colt named Cheddar Bomb. Now, they are two years old, and there has been a friendly competition in the marriage about which would make the early two-year-old. Here I am begging Cory to let me ride Vivvie!”

At the Tom Powers Futurity, Candice and Vivvie won as well, so they’re two for two, at the moment.

Keith Miller rode EPR Face It I’m Fancy to win the Color Junior Hunter Under Saddle. The colorful 4-year-old named “Chrome” has had a successful past with former trainer, Julie Schmidt, winning as a two-year-old at the Quarter Horse Congress. Now, he’s with a new owner in Samantha Gardener. She won her BCF 4-6-Year-Old Non Pro Hunter Under Saddle class earlier today. 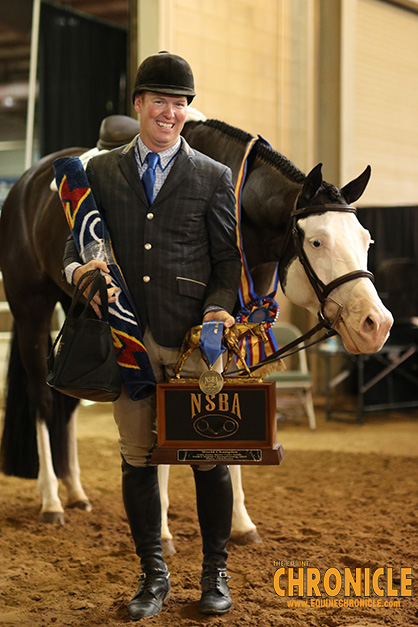 “I love how he looks, first of all, because he’s gorgeous,” she says. “My favorite is how soft his canter is and how good-natured he is to be around.”

Aaron Moses rode VS The First Lady to win the BCF 4-6-Year-Old Open Western Pleasure for Kristen Galyean, who also won the non-pro division of the class this morning.

“Lady” is six years old now and has quite the history winning the Equine Chronicle Congress Masters with Gil Galyean as a two-year-old and the Amateur Western Pleasure at the 2017 AQHA World Show with Kristen. She’s by VS Code Red and out of Cool Krymsun Lady.

“I bought her from Susan Knapp as soon as she hit the ground. She’s really good-minded, easy, and enjoys her job. She’s extremely spoiled, which is really my fault. I think she has a lot of her father’s attributes, but she’s also the perfect mixture, because her mother was an incredible mare too.” 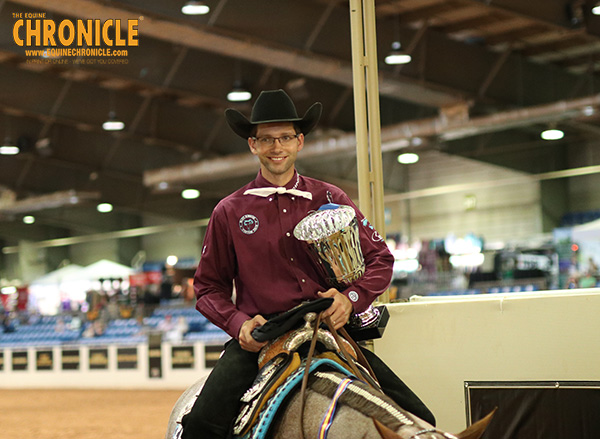