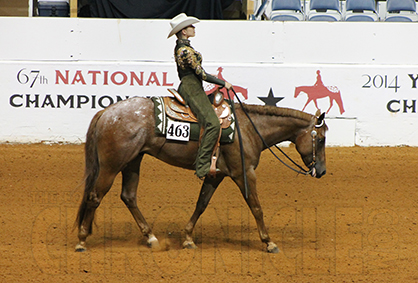 The 72nd National Appaloosa Show & 2019 World Championship Appaloosa Youth Show will be held June 25th – July 6th, 2019 at the Will Rogers Equestrian Center in Fort Worth, TX! Appaloosas and exhibitors from across the nation will gather for this historic event to compete for National and World Championship titles in a wide variety of classes. As the nation’s longest-running, single-breed horse show, this is an exciting opportunity to witness the versatility and beauty of the Appaloosa.

The show will kick off on June 24th with the 4th Annual Stars & Stripes Summer Spectacular, a full-day show for equestrians with disabilities co-hosted by the Appaloosa Horse Club and APHA. The beloved event will consist of 23 classes for both supported and independent riders, as well as a special division for veterans. Stars & Stripes would not be possible without the generosity of sponsors. If you are interested in supporting the show and sponsoring a class, please contact the ApHC Marketing Department.

Open and Non-Pro competition will be held at the beginning of the two week event in Fort Worth. Exhibitors will compete in a variety of disciplines including cutting, roping, halter, western pleasure, saddle seat, games, hunter under saddle, trail and much more. This year, new ranch reining classes are being introduced to the impressive line-up. With exhibitors, owners, and trainers seeking to earn National Championship Titles, there will be no shortage of hard work and talent demonstrated!

The youth portion of the show will begin with the 2018 Year-End Youth Awards Banquet on Sunday, June 30th, recognizing and celebrating the accomplishments of members. During the next week, youth of all ages will compete for World Championship titles in a variety of events while also enjoying fun activities planned by the AYA Board of Directors. The annual Dennards Western Wear Egg Toss and Wheelbarrow Race are always favorite activities. This year, the first ever AYA Movie Night & Pizza Party will be held on Friday, July 5th. The show will wrap up on Saturday, July 6thwith the Champion of Champions competition, sponsored by Deerfield Farm, and the 2019 World Championship Appaloosa Youth Show Awards Ceremony.

Visitors won’t want to miss out on shopping at the World of Color Gift Show while they are at the show. Featuring a wide assortment of vendors, from tack to apparel to jewelry, there is something for everyone!

The Appaloosa Horse Club is looking forward to another memorable event and invites Appaloosa and equine fans alike to join us at Will Rogers Memorial Center for the 72nd National Appaloosa Show & 2019 World Championship Appaloosa Youth Show.

For more information about the show or any of these exciting events, visit www.appaloosa.com or call (208) 882-5578.

The Appaloosa Horse Club (ApHC) was established in 1938 with a mission of honoring the heritage and promoting the future of the Appaloosa horse. The ApHC has since registered more than 700,000 Appaloosas, which are known for their distinctive color, intelligence and even temperament. True to their reputation as an extremely versatile breed, Appaloosas can be found in nearly every discipline including racing, endurance riding and serving as reliable family horses. The international breed registry is headquartered in Moscow, Idaho, the heart of the Palouse region—the Appaloosa breed’s namesake and point of origin.