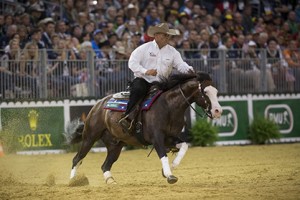 In what has been billed as one of the toughest reining competitions ever, it shouldn’t be a surprise who stood atop the podium at the 2014 Alltech FEI World Equestrian Games in Normandy. Team USA’s riders brought home the gold, silver, and bronze with stellar performances.

Working off of reverse order from the results of the qualifying round, Shawn Flarida entered the arena at full speed on Michell Kimball’s Spooks Gotta Whiz for the first rundown of NRHA pattern 10. He attacked every maneuver with his usual tact and scored a 233.5 for the gold medal, his second WEG individual gold medal (His first was in 2002 aboard San Jo Freckles). The 7-year-old bay stallion is double registered with AQHA and APHA.

“That run-in stop is kind of the key to that pattern. It’s the hardest one, and when everyone’s yelling like that and those horses run in, it’s pretty exciting. The three of our horses tonight… that’s where we did it,” Flarida says.

Before Flarida, Andrea Fappani, riding Silver Spurs Equine’s Custom Cash Advance, scored a 229 with a strong run. However, an unfortunate trot out of the first rollback caused a penalty that might have cost him the gold. Considering this was Fappani’s third competitive ride on “Cash,” he was happy with how the 2006 stallion gave his all the entire week.

“I came here confident that the horse knew what he was doing, and I just knew that I needed to give him the confidence myself to do his job. That’s what I kept telling myself,” Fappani says. “I knew it wasn’t going to be easy.”

Mandy McCutcheon brought some girl power to the event with a score of 227 on Tim and Colleen McQuay’s Yellow Jersey. The score was good enough for the bronze and to finish out the team USA podium sweep.

Filling out the top five was Germany’s Grischa Ludwig on Ruf Tuf Juice (226) and Rudi Kronsteiner on Dr Lee Hook (225.5).

The United States reining contingent qualified all six riders for the individual finals—a feat not matched by any other team. Jordan Larson, riding HF Mobster, tied for sixth after a massive stumble in the second set of fast circles, but they held on to score a 223.5. Troy Heikes, who won the second round of individual qualifying on Thursday, scored a 220.5 on Lil Gun Dunit (owned by Denise Bixler and Steve Tarani). Finally, defending WEG gold medalist Tom McCutcheon rode Dun Git A Nicdual, but ended up with a no score.

Mandy McCutcheon, who is the only non pro and female NRHA Million Dollar Rider, told the media she feels lucky to place behind Flarida and Fappani. “I’ve been lucky to have the opportunities I’ve had for my whole career and the opportunities my parents have given me,” she says. “I couldn’t be more thankful or appreciative to them; I wouldn’t be here without them and the same thing with Tom.”