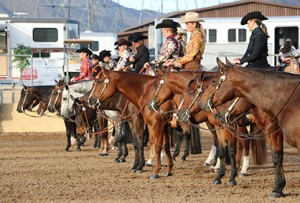 All photos courtesy of Kristin Spinning.

For nine days in Scottsdale, Arizona, all the elements came together to create a spectacular Sun Circuit Quarter Horse Show. The weather cooperated with ample sunshine. The schedule was crafted to be more exhibitor-friendly. Large class sizes translated into big point totals. The quality of the horses couldn’t be matched. Dedicated staff and volunteers kept everything running smoothly, while facilities at WestWorld provided plenty of room for every discipline.

“At one point, we had seven arenas running simultaneously, along with warm-up pens,” said show director Doug Huls. “We used every bit of ground available. That’s what’s so great about WestWorld; we can accommodate everyone and every discipline. Sun Circuit offers a diversity of classes you don’t see at many shows.” To be able to have a Versatility Ranch Horse class at one end and Jumpers at the other is not only a great opportunity for all exhibitors to compete at a high level, but it draws spectators and showcases the diversity of Quarter Horses. 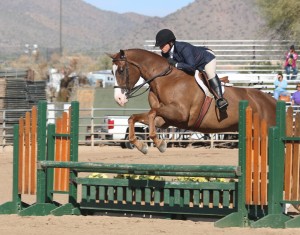 There were notable increases in entries in many classes. Cowhorse classes saw double the numbers over previous years, with as many as 43 in Junior and close to 40 in Senior. Reining drew large numbers as well across Junior, Senior, and Amateur divisions. The Trail pen kept busy all nine days with huge numbers in Green and Junior. To facilitate the volume of horses, the pen was split in half so two divisions could work simultaneously.

The atmosphere at Sun Circuit is what really stood out this year. From opening day right through to the last class, people were enthusiastic and having a good time. Though abundant sunshine (while the rest of the country was buried in snow and ice) was certainly a factor, much of the elation could be attributed to the schedule.

“We worked really hard to put the schedule together so that people would be able to get done early, take a break, and enjoy their time in and around Scottsdale,” said Huls. Though the first Saturday show ran long into the night, with unprecedented numbers in roping and cowhorse, the rest of the week saw arenas empty out by dark. Several fun and entertaining special classes were held indoors in the evenings featuring reining, cowhorse, roping, barrel racing, and mounted shooting. Those types of activities kept the festive atmosphere going right to the end. 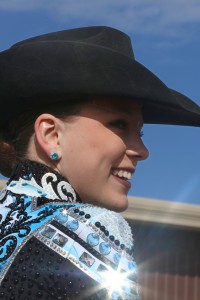 Sun Circuit has become much more than a high caliber show with a lot of points. Over the past few years, Doug Huls and Arizona Quarter Horse Association have worked hard to make it an exhibitor-centric extravaganza. This has included creating more special events, offering more added money, planning fun parties, and scheduling random giveaways that can make anyone a winner. Sponsors and vendors really stepped up this year with the giveaways, providing a wide range of gift certificates, clothing, horse care products, saddles, TVs, and electronics. Giveaway winners were chosen through a variety trivia games, fun challenges, and random drawings. For more levity, Sun Circuit had four free parties: The John’s, Tobin’s and Searles’ Welcome Party, The Mechanic Lunch Party, The Machine Made Lunch Party and a dinner party in conjunction with a benefit auction for the much loved horseman, Benny Guitron, who is battling leukemia.

Added money classes provided more exciting entertainment along with some tough competition. With the top reining horses and trainers in attendance, it made perfect sense to amp up the competition with some cash. Thus, the Self Shine Reining Stakes was born. The Moran Family was proud to sponsor the event in honor of their champion reining stud. With $5,000 added to the Open division, seven horses took a run at the money. With a field this hot, everyone had to push it for their best. Patrick Flaherty did just that on Jenane Overgaard’s Electric Grid, putting together the right moves to mark a 145.5. Randy Paul, aboard Chics Dream About Me, owned by Day Creek Ranch, had a sweet run and also earned a 145.5. The tie for first and second paid $2,280 each.

The $10,000 added Smart Boons Open Fence Work Challenge attracted a roster of NRCHA super stars. Kevin and Sydney Knight, owners of Smart Boons, have been on board sponsoring this event since its inception. “This is the best one we’ve had yet and the most entries,” said Kevin Knight after the event. “It turned out great. The guys had such great runs, and the horses were just the best.” The enthusiastic crowd was treated to some awesome cow work from the 19 entrants. At the end of the night, it was Justin Wright’s ride on Shelly Krieger’s horse, A Dazzyling Prize, that dazzled the judges to score 151 and earn a check for $4,256. 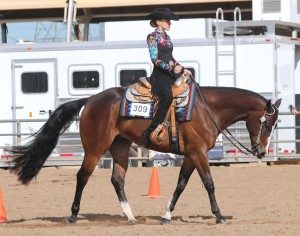 The Cinch Timed Event Challenge offered ropers a chance to catch some cash with $2,500 added to the Open Heading and Heeling and $1,250 added to the Non Pro Heading and Heeling. In the Open Heading, Jon & Peggy Hershberger’s horse, Cash R Rooster, got son Jason to the cow quick, and his partner sealed the deal at 6.56 to take the top spot and $1,440. The heelers were on fire also, with Les Oswald getting it done in a blistering 5.27 seconds on Cee San Dee Slide, owned by Layton Oswald. They earned $1,400 for their efforts. With 14 entries in the Non Pro Heading, the pot was sizable, and Dennis Ambrose won $1,060 with an impressive time of 7.14 riding Roanies Fancy Gun. Itchmeallover and Tyler Burkey had the best heeling time of 9.15 to win $975.

The Green Hunter Under Saddle Stakes sponsored by UlcerGard had $5,000 added to the Open and $2,500 to the Limited. Aint Gota Lot was the big winner in the Open with rider Beth Case and owners PB Trust, earning $3,180, while Sienna Sky picked up $2,650 with rider Daniel Prouhet aboard for Wen-dee and Chad Cote. Performance Pleasure was in the spotlight with another added money class. Rider Bradley Ost showing that UF A Certain Star, owned by Courtney Archer, had just what the judges were looking for in this class, and won $1,125 in the Open, and the same amount in the Non Pro.

By all accounts, this year’s Sun Circuit was one of the best yet. AzQHA President, Barbara Truex, DVM, reflected on the show, “All of us at AzQHA are very proud of what we have achieved. This year was phenomenal. We are thrilled how everything went and that the exhibitors were so happy with the show.” Truex also credited the staff and volunteers, recognizing how hard everyone works throughout the year to make the show successful. She added, “I am so proud or our dedicated volunteers. Their work and enthusiasm has been exceptional.”

Sun Circuit is a testament to how horse shows need to focus on the exhibitor experience to be successful. By making the show enjoyable and by creating a workable schedule, Sun Circuit has been able to grow without becoming unmanageable. Before the last trailers pulled out of WestWorld, Doug Huls was already planning how to make next year even better. Judging by the reactions of exhibitors, they are eager to see what that will look like.