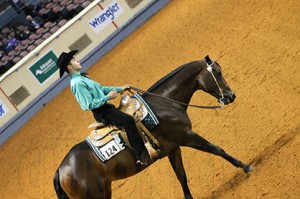 The points required to qualify for the American Quarter Horse Association World Championship shows have been modified for 2014.

Separate Level 2 finals will not be held at the 2014 world shows, but top-placing Level 2-eligible entries will be recognized during the class finals. These awards will be similar to the previous Intermediate awards that have been presented during finals classes at the AQHA World Shows.

Halter exhibitors will still be able to qualify to the world shows by earning the designated number of qualifying points, and qualifying in that manner only will appear on the horse’s permanent record.

“Adding the participation invitation for halter exhibitors was discussed at a meeting with AQHA alliance partner World Conformation Horse Association, who asked AQHA to look at amateur and open halter exhibitor entries and explore the option,” said AQHA President Johne Dobbs. “After looking at the averages for the past two years, the participation invitation was presented to the AQHA Executive Committee, who approved the concept during their October meeting.

“We know there are many halter exhibitors who have traditionally tried to support AQHA shows, but time and again, they are faced with not enough horses to make a point. Thus, they are not able to qualify for the world shows,” Dobbs added. “This new invitational method will benefit the AQHA members hauling, showing to the judges and supporting the AQHA shows.”

The new participation invitation method is for traditional halter classes only and does not include performance halter.

The Amateur State/Province Invitational program will once again be an available method of earning an invitation for amateur and Select amateur competitors.

The amateur-horse combination will be required to reach at least half the points set as the minimum to be invited as a state/provincial invitee in each particular class. This program is operated by AQHA, not the AQHA affiliates, and exhibitors are invited based on the state/province in which they reside, not where they show. Ties will be broken by the exhibitor who won the last point or 0.5 point first.