AYA Directors participate in conference calls and gather at the World Championship Appaloosa Youth Show to discuss matters concerning the AYA. During these occasions, directors are to bring forth suggestions and ideas from the AYA members residing in their territory and zone in order to continuously to improve the AYA.

Newly elected officials will be sworn in during the spring conference call. Date and time TBA. Newly elected are displayed in bold. 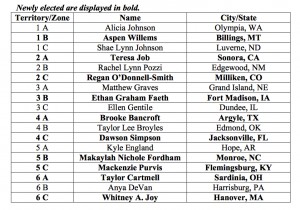 The AYA is the youth affiliate of the Appaloosa Horse Club. Officially approved in 1981, the AYA was the first youth program developed to complement an equine breed association.

To learn more about the Appaloosa Youth Association, visit www.appaloosayouth.com or call the ApHC Youth Coordinator at 208-882-5578 ext. 245.

The Appaloosa Horse Club (ApHC) was established in 1938, with a mission of preserving, promoting and enhancing the Appaloosa breed. The ApHC has since registered more than 700,000 Appaloosas, which are known for their distinctive color, intelligence and even temperament. True to their reputation as an extremely versatile breed, Appaloosas can be found in nearly every discipline including racing, endurance riding and serving as reliable family horses. The international breed registry is headquartered in Moscow, Idaho, the heart of the Palouse region, the Appaloosa breed’s namesake and point of origin.