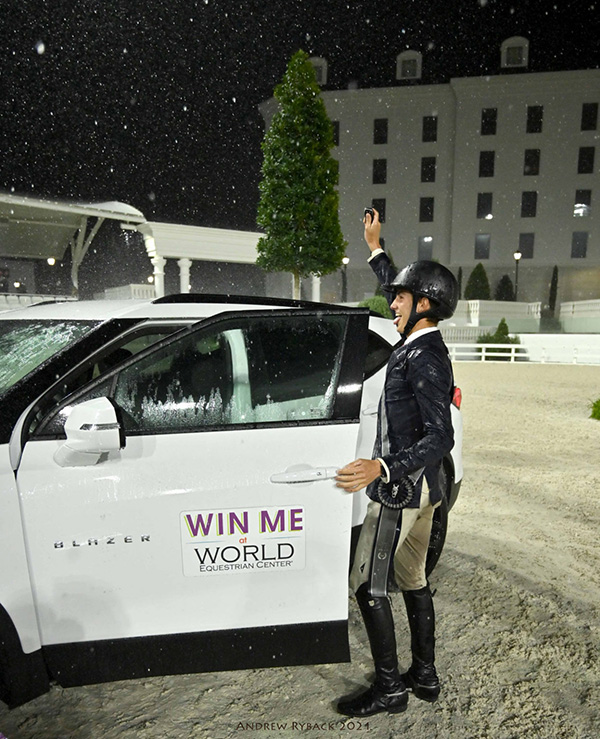 Seventeen-year-old Dominic Gibbs and Cent 15 bested 59 exhibitors, two demanding course rounds and an extensive flatwork to show off their equitation before being named the winner of the World Equestrian Center Ocala Equitation Cup on Saturday evening. Dominic won a 2021 Chevrolet Blazer SUV for his efforts, and his trainer, Stacia Madden, won a $30,000 check. The event was held as part of the WEC-Ocala Winter Classic Spectacular circuit, which runs through the end of March.

The final equitation test proved challenging for riders and their mounts, and included a trot jump, a counter lead jump and a hand gallop as part of the course, while the flat work included lengthened strides at the trot and canter as well as dropping stirrups.

A Good Time for New Wheels

“I love Bobby Murphy’s courses, because he always has some great jumps and all the stuff he brings out,” Dominic said. “Cent is a brilliant horse on the flat, and I can really showcase myself and him, especially on the extensions – he’s just beautiful. I was really trying to show myself off to the judges in the flat. On Round 2, the only thing that was going through my head was just to do the test, and do it well.” 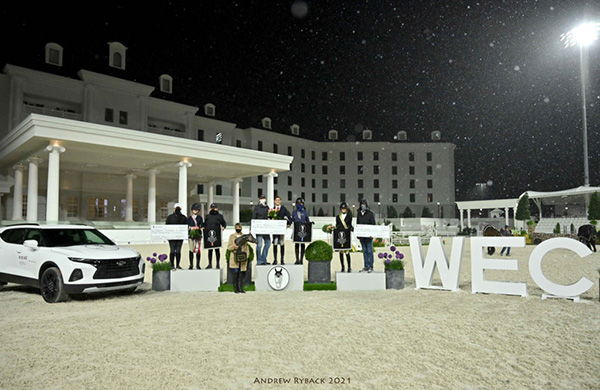 Dominic owns the 13-year-old gelding. “He’s been my 3’6” Equitation horse. He was supposed to be my High Junior Jumper, but he told me he wanted to be an Equitation horse, so I worked with my trainers at Beacon Hill Stables to turn him into an Equitation Superstar. He loves his job,” Dominic said.

“I definitely needed a new car, so I’m thrilled to get a new car. It’s a great prize and it couldn’t have happened at a better time. There aren’t that many opportunities to get a prize like this.”

Dominic, who is 17, is showing his last year as a junior rider in 2021. “Our show season is still kind of up in the air,” he said. “If we are able to go to Europe, we will try to do that, because I’ve always wanted to show there. If not, we may do the Michigan series.”

Stacia Madden brought five riders to the World Equestrian Center, and Week 7 was their inaugural show at the facility. “We’re fortunate to be able to show here,” she said. “I’m really impressed with the facility. It’s a well thought out, horse-friendly venue.”

With Dominic’s first place ride, Stacia took home the $30,000 trainer bonus. “Dominic has worked really hard, and has a real relationship with this horse, it’s really special,” she said. Stacia had traveled from her Beacon Hill Show Stables in Colts Neck, New Jersey, with her clients, who came to Ocala from Wellington.

“I’m a huge fan of sponsoring inaugural events, and I try to support things that are good for the industry. I was proud to be able to bring five kids here to support this first event,” she said. “We went to WEC Wilmington for the first time too for the Capital Challenge event earlier, and we had a successful show there also.” 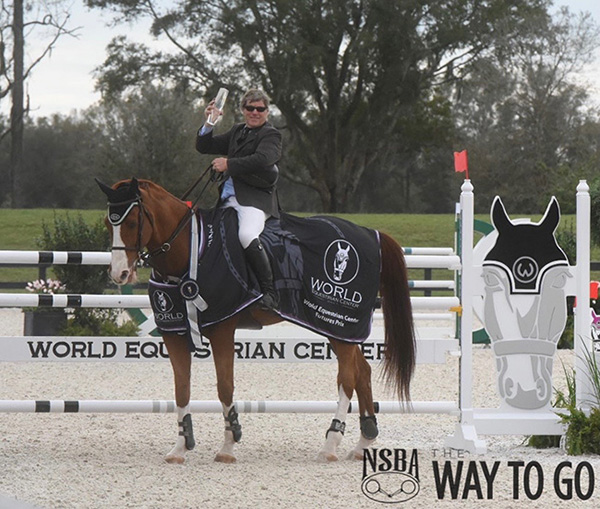 Hugh Graham and Florina took the top spot in the Week 6 Futures Prix, which took place in the Stadium Arena on Saturday.

“Florino is a very promising horse,” Hugh said. “It’s been a little frustrating because of COVID-19, because I didn’t get to show him much. I’ve had 37 different horses win grand prix’s including the Olympics and Pan Am Games, and he could be one of the best.

“I was over at this ring and that ring, so I really didn’t know what the leading time was – so I thought I would just lay it down and if it worked, it worked. That was this horse’s first big win, and the fastest he has ever gone. I bought him in Germany from an Amateur, and he was doing the meter 40’s. I loved him.”