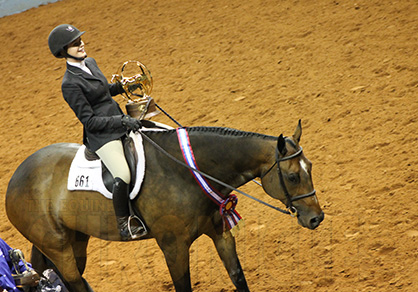 The last time we interviewed Nya Kearns at the AQHA Youth World Show was back in 2010, when, at the age of ten, she was the youngest rider to make it back to the Equitation finals. She’s been turning out consistent performances ever since, but this is her first World Championship title.

Nya’s partner for this evening’s class was BMQ Stop For Traffic, aka “Merlin the Magic Horse.” This dynamic, young duo competes under the guidance of her father Brad Kearns, mother Valerie Kearns, and her Over Fences trainer Jennifer Wellhouse. 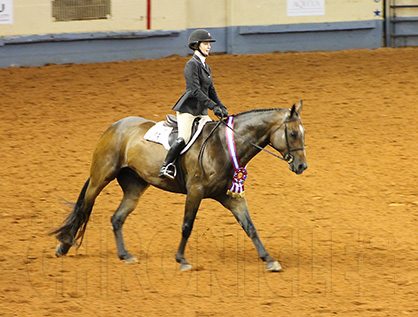 “Merlin is a very happy horse,” Nya says. “I’ve never seen him be sad or in a bad mood. He’s very food-motivated. Every time we give him Ulcerguard, he thinks it’s a treat because of the little wrapper it comes in. Also, he’s a little clumsy and not the smartest horse. You have to make him anticipate everything, because he never sees anything coming!”

“I actually really liked the pattern,” she says. “I thought starting it off with a more difficult maneuver kind of set the pace for the whole pattern. I thought drawing the circles was very interesting and difficult.”

“We’ve been working on riding without stirrups since my first Youth World, so I was ready. I was excited, because I’ve never gotten to do a finals patterns without my stirrups before. I think my favorite part was the lead change, to the collection, to the hand gallop down the long wall. That part was very pretty to watch.” 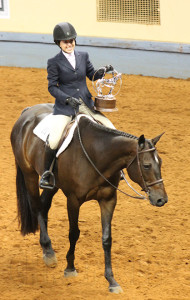 Now that the Youth World has concluded for Nya, she’s planning to head back to school, but not before she goes on a Wisconsin wake boarding trip with Wellhouse!