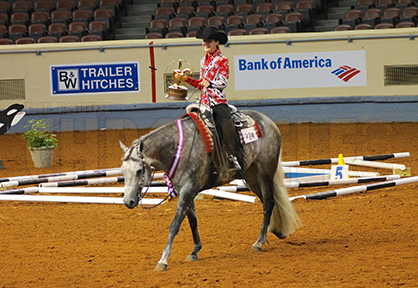 Emily Maul and Only Temptation

Today’s Trail Finals at the 2015 AQHYA World Championship Show concluded with an exciting run-off between two competitors who both scored an impressive 237.5. After the top 20 qualifiers completed their patterns, it was determined that Emily Maul with Only Temptation and Gina Hitchman with So So Good would participate in a run-off to determine the top two spots.

With a solid performance in both the Finals and run-off it was Emily Maul with Only Temptation who was named the World Champion and 13 and under winner. 14-year-old Emily and “Lefty” compete under the guidance of Leslie Lange and Jeff Mellott, both of whom Emily gives much praise. “They’re really good trainers!” she says. 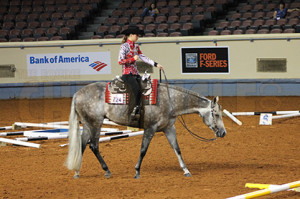 Emily’s partner for today’s class was her 5-year-old gray gelding, “Lefty,” aptly named because of his two white socks on his left front and hind feet. They’ve been a team since Lefty was two years old and enjoy competing in Horsemanship and Trail. This is their first World Champion title.

Even though Trail patterns at the Youth World Show are known to be very challenging, Emily had no fear going into the finals. She did have some concerns about the back-through with its conveniently placed and very tempting tree. Thankfully, Lefty had already eaten lunch before the class today, so it was no problem. 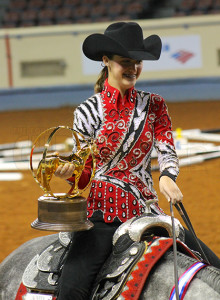 “I absolutely love Tim’s pattern,” she says. “He’s an artist at work. They’re amazing. It started off a little easy. When I was first looking at it on the paper, I thought it didn’t really look like a Tim Kimura pattern. Then, when we got to the end, I was like, ‘Here we go!’ It was a lot of fun. I love the harder patterns.”

“My favorite part was definitely the back-through, because we can maneuver through it well. I love the trot into the box, stop, walk, turn, and walk out. I also really like the lope overs.”

When it was determined that a run-off would be needed to break the tie for first and second place, Emily relied on the guidance of her trainers to give her an extra boost of confidence.

“It was a little pressure, but my coaches told me to go out there, breathe, and ride the pattern just like it’s another horse show. That’s what I did and obviously it pretty much worked!” 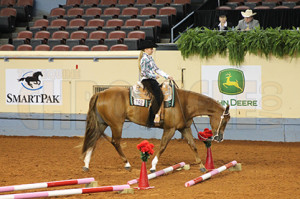 Gina Hitchman and So So Good